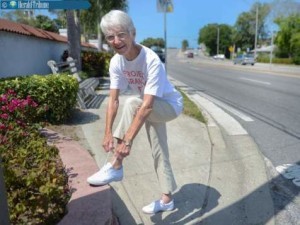 Today on Radioactivity, we discuss a Sarasota woman who is taking the movement for campaign finance reform to Tallahassee by walking there along with her supporters. Next Monday 81-year-old Rhana Bazzini will begin walking- 300 miles- from Sarasota to Tallahassee in an effort to win support for campaign finance reform. Her plan is to arrive in the state capital by the beginning of December.

But, why is this petite 94-pound woman embarking on a more than 7-week trip on foot when the 300 miles to Florida’s capital can be covered by car in about 5 hours?

Rhana is taking her time – step by step and mile by mile – to help her friends, neighbors, and fellow voters see her passion for changing the errors in the way political campaigns are financed.

We’ll also talk with a leading church state separation activist who will be in Sarasota tomorrow.

Rev. Steven Baines is a national spokesperson on issues of faith and politics, has been featured debating leaders of the religious right and the so-called “ex-gay” movement on CNN, CSPAN, Court TV and numerous syndicated talk radio shows.

Since 1999, he has been affiliated with the Christian Church (Disciples of Christ) and is currently serving as moderator at the denomination’s National Cathedral in Washington DC.

The program tomorrow is presented by the Sarasota-Manatee Chapter of Americans United for Separation of Church and State. For more information visit au [email protected] or call 941-377-1003.