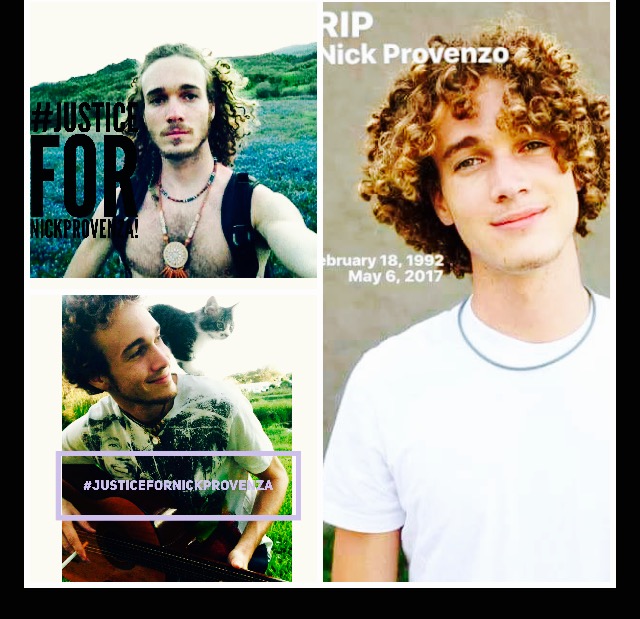 Last Saturday a Tarpon Springs Police Officer shot and killed a 25-year-old man; according to police, the officer was working an “Off-Duty event” – a car show – and was alerted about a suspicious person. When the officer stopped the bicyclist he said he was given fake names and then shot Nick Provenza after he charged the cop with a knife. But posts on a Facebook page supporting Provenza say there was no knife. There are also conflicting accounts of how many police officers were involved. Tarpon Springs Police kept the name of the officer a secret until they released a statement Tuesday. Police say a knife was recovered from the scene. 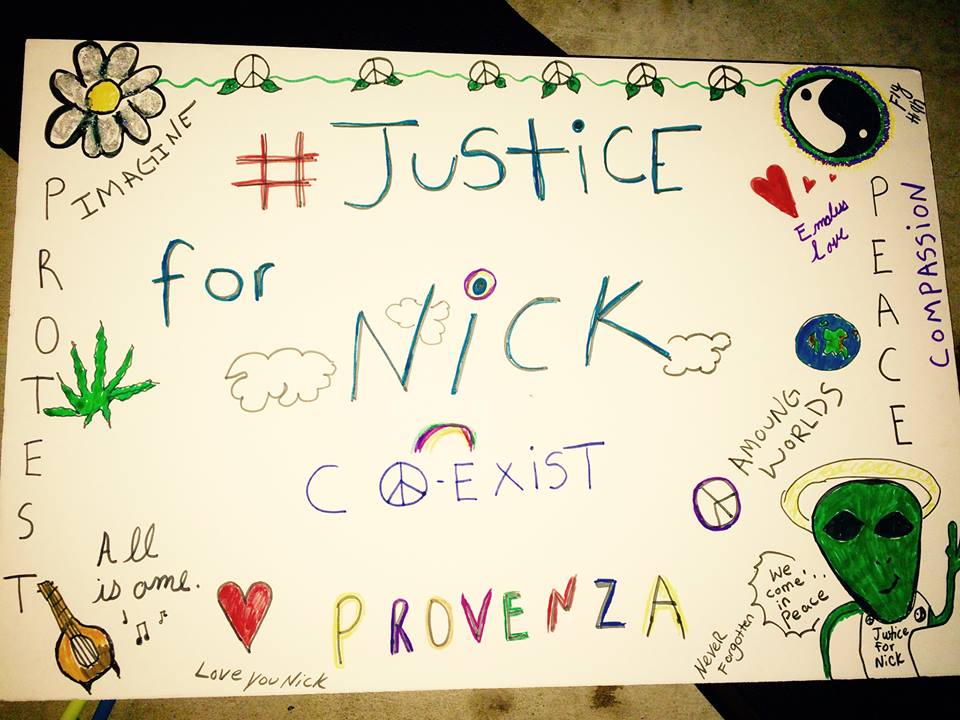 Image made for the Facebook page Justice for Nick Provenza.

“He was a very warm-hearted, super-intelligent, creative, young man. At the age of 16, he started suffering from mental illness, so he dropped out of high-school. He was on a football team, you know, doing well. All around great kid until the mental illness took hold and it’s been a struggle ever since. He’s been baker-acted, I think it’s 27 times since the age of 16. The first time he went to the hospital it was voluntary. He couldn’t understand what was going on in his head and they misdiagnosed it as substance abuse, but, we quickly found out it was more than that.

“So, we’ve struggled over the years with the broken mental-health system in Florida. I often call it the revolving door; where they’re baker-acted and typically released after a few days of medication, even though the hospitals know they’re not going to take medication, so, hence the name revolving door.

“Nick, very warm-hearted as I said, John Lennon-like. He was all about oneness, co-exist. When he was ill, he was not himself, a very different person when he was ill and we struggled with that over the years, trying to come up with a solution.”

When he was not on his medication, would it sound like something likely that he would have pulled a knife on a police officer? Because there’s some people who say that there was no knife and then the police say they’ve recovered a knife and put it in evidence.

“Yeah, I can tell you out of the 27 times that he’s been baker-acted, not once did he ever show any violence or disrespect towards police. There’s been a few incidences where the St. Pete police, probably 6-7 years ago now, approached him in the back of an alley. He was behind a bar and he had a joint of marijuana and quickly escalated. They handcuffed him, cuffed his feet and then he was not doing well mentally and I think he was trying to kick out the window of the police car and they dragged him out of the car and beat him so badly that he was urinating blood for several days. We tried to press charges. We called several attorneys; none of them seemed willing to take the case. We called internal affairs; they wanted my son to come down and give a statement, but, he was scared to death. So, eventually we, unfortunately, now in hind-sight, didn’t follow-up.

“There was another incident where the police grabbed him and threw him over the door of a car. I mean, I respect the police. Nicholas’ grandfather was a police officer, he respected the police, so I really don’t know. I wasn’t there. We don’t have the facts, but, I can just tell you from past experience.”

“Again, I don’t have the facts yet. We’re waiting for, you have let them to finish their investigation. But, I don’t know. At first I was told the same thing that is was one officer and then I just read a typed up eye-witness account that I don’t know if it’s true or not, that suggested there were two. This was just last night I found this out and according to this witness and again, I don’t know if it’s true or not, that they were basically harassing my son and he was complying and it quickly got out of control until shots were fired, so like I said, I don’t have the facts. As you can imagine that was very disturbing to hear that if it were true. I’m trying not to pass judgement, but, it’s challenging, as you can imagine.”

And Saturday, supporters of your son are going to have a peaceful protest. They’re calling it Peaceful Protest for Provenza.

“Yeah, protests are fine, right? It’s free-speech, it’s America, but, when I heard about that protest, which I thought was taking place a few days ago, I quickly put a post on my son’s Facebook to please encourage people not to get violent, to not lash out at the police, that’s just foolish. You can’t take any group of people and say that all of them are bad or unethical. So, there’s bad doctors, there’s bad lawyers, there’s bad carpenters, there’s bad police, so we don’t know and until the facts come out– if anyone is violent, it could only get worse; innocent people could get hurt. My son was all about peace, love, and unity. So, I encourage people not to do anything stupid and just protest legally, I’m all for it.”

The Tarpon Springs Police say they are not answering questions about the case because it’s under investigation by the Florida Department of Law Enforcement. They identify the officer as Scott MacIsaac, who has been with the department since 2011 and completed Crisis Intervention Training in April.

On Saturday there is what’s being called “Peacefulprotestforprovenza” near the site where he was killed in Tarpon Springs. It starts at 1:30 p.m. at the corner of East Tarpon Avenue and North Safford Avenue.

A video posted online seems to show the aftermath of the shooting. Provenza is lying in an intersection in apparent agony. One police officer is nearby and screaming a profanity but is not providing first aid.