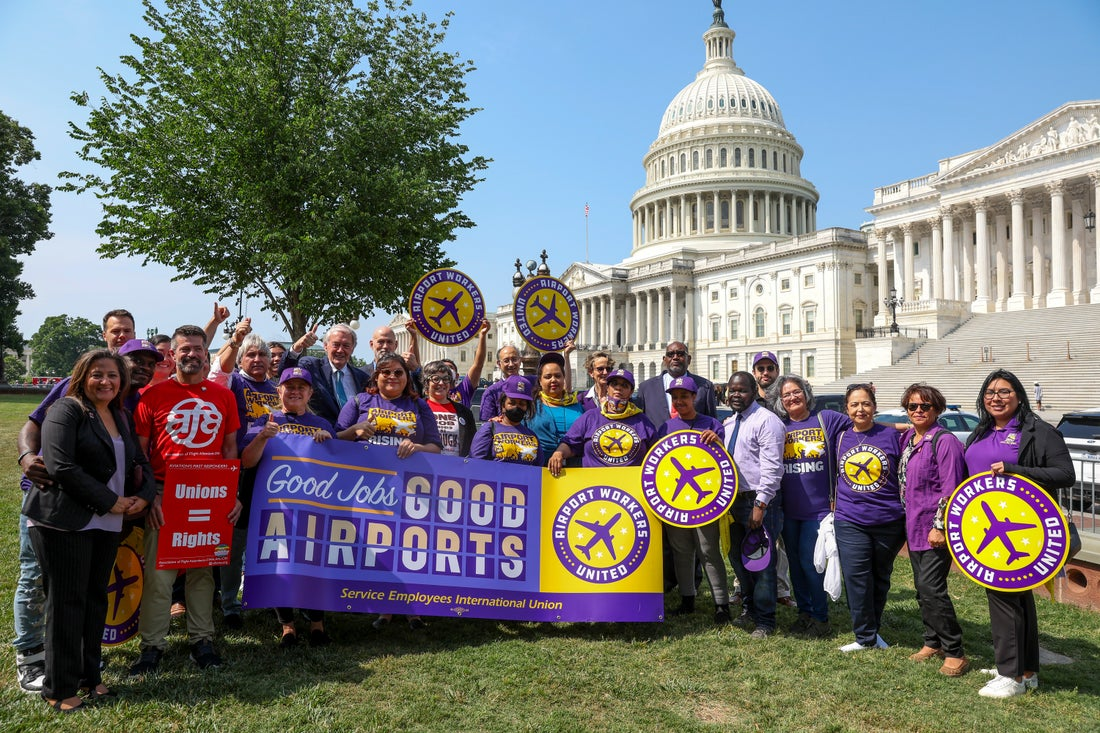 New legislation introduced in US Congress could help to ensure a living wage and benefits for hundreds of thousands of airport workers across the United States. That includes some of the the lowest-paid workers at Tampa International Airport, some of whom make as little as $10 an hour.

“Working people are the engines of our economy, and they’re rising up to demand the dignity and compensation they deserve for their essential labor,” Sen. Markey said. “Airport service workers have kept Americans moving safely through two years of a global pandemic, so as our airports begin to recover, we can’t let the status quo fly.”

The pro-labor legislation is backed by several labor unions that represent airport and airline employees, including the Association of Flight Attendants (AFA-CWA), the Transportation Workers Union, the International Brotherhood of Teamsters, and the 32BJ Service Workers International Union (SEIU), which represents about 3,000 contracted workers at Florida airports, and 18,000 nationwide.

“The aviation industry survived the pandemic because of the dedication of airport service workers who kept us moving and risked their own health, as well as the health and safety of their families,” said Rep. Garcia. “But service workers haven’t gotten the wages and benefits that they deserve. They deserve so much more. And that starts with giving them a seat at the table.”

One of those workers is Gladys Perez, a 71-year old security officer at Tampa International Airport. Like much of the airport service workforce, Perez is a person of color and an immigrant, who moved to Tampa from Puerto Rico, to be with family.

She’s worked at Tampa International Airport for 18 years, and currently makes $12 an hour — up from less than $11 last year. She works full-time, 40 hours a week to support herself and her family, including an adult daughter who is unable to work, and her grandkids.

For about a year, she’s been organizing with the 32BJ Service Employees International Union (SEIU) at TPA, to secure better pay and benefits for service workers like herself.

With air travel picking back up, Perez says that low pay has exacerbated the airport’s short-staffing problem, making it difficult for service workers like herself to assist passengers without stretching themselves thin. “Mostly, they say, ‘Oh people come and they don’t want to work.’ But that’s not the point only. It’s just that the salary is too low,” Perez told WMNF.

All in all, airports receive $11 billion dollars in federal funds each year. The airline industry also received $54 billion in CARES Act funding, meant to, in part, cover payroll during the COVID-19 pandemic and help airports maintain operations.

The 32BJ SEIU labor union says that accepting public dollars should come with a stipulation that airports, at the very least, pay their workers a living wage — and make sure the employers they contract with do, too. “This will not only benefit airport workers but alleviate some of the staffing shortages that are exacerbating travel delays and cancellations,” a 32BJ SEIU spokesperson said.

Like many airport service jobs, Perez’s position at TPA is outsourced to an external, low-paying company that contracts with the airport. This follows a years-long trend, dating back to the 1970’s, that has driven down wages for many service positions, including Perez’s. The company she’s directly employed by also doesn’t provide her with job benefits, like affordable healthcare, or paid sick leave.

Under the Good Jobs for Good Airports Act, all employers operating at U.S. airports that accept federal dollars would be required to adopt livable wage and benefit standards, similar to those afforded to workers contracted by the federal government under the Service Contract Act.

A lack of benefits on the job is keenly felt by Anthony Sanders, a 46-year-old wheelchair attendant and baggage handler.

A former security guard from New York, Sanders has worked at Tampa’s major airport for four years and makes $10 an hour, plus tips.

For the last month, he’s been out of work without pay, due to a blood clot that formed in his leg. Sanders says he loves his job, even when it has him walking ten, twelve miles a day, transporting wheelchairs from the airport’s parking lots to the terminals.

He helps the elderly, people with disabilities, and others who require a wheelchair make it onto their flights. Still, workers told WMNF some attendants at Tampa International Airport have had to push multiple wheelchairs at a time — a safety hazard for both passengers and workers — due to there not being enough staff.

Sanders, who currently splits a $1500-a-month apartment with a roommate, says it’s hard to make ends meet in Tampa on $10 an hour, even working full-time. “I’m living paycheck to paycheck,” Sanders told WMNF. “I have to work harder, or work longer.”

Organizing for a living wage

Frank Bohan is a baggage handler and, like Sanders, also attends to passengers in wheelchairs. The 65-year-old is a former union member with the Local 94 from the Bronx in New York City, and a current shop steward at TPA. “I’ve got a second life with the union now, I love it,” Bohan told WMNF, with no small sense of pride.

When he first started working at the Tampa airport five years ago, he made a mere $5.50 an hour, plus tips. Last year, baggage handlers at TPA reported making as little as $7 an hour, largely relying on tips that most passengers aren’t aware they accept. Today, Bohan makes $10 an hour.

Still, Bohan believes, with the cost of living and the work they do, wages should go up to $15 an hour, ideally closer to $18 an hour, minimum — not just for himself, but especially for his coworkers, many of whom are immigrants and people of color. He says that consequences of the COVID-19 pandemic, coupled with a rising cost of living in Tampa, has made a tough, but important job even harder.

“The first six eight months of the pandemic was brutal,” said Bohan. “We walked around with our hands in our pockets. It was like a ghost town. No one around, so you couldn’t make any money. That was really tough on people. You know what I’m saying? And I know I’ve worked six days a week, sometimes 10 to 12 hours a day just to make money.”

Still, Bohan considers himself lucky. This is his retirement job, he said. Today, he gets Social Security, has a pension, and healthcare coverage through Medicare. “But I see people, you know, these younger people that are really struggling.”

Supporters of the Good Jobs for Good Airports Act, like Senate Majority Leader Chuck Schumer (D-NY), say that paying all airport workers a living wage will help all of those who travel, not just the workers. The wage and benefit standards could help alleviate staffing shortages that are causing greater delays and cancellations.

“Studies show that paying airport workers a living wage benefits consumers, because service is better. The security is better. The safety is better. Lower turnover, [and] ensures airports have an experienced workforce to respond,” said Schumer.

The legislation would also make sure that taxpayer dollars that go to these airports are put to good use. “We’re here to say, paying those crappy wages for such important jobs, when there’s so much federal money going into our airports — that won’t fly any longer,” Schumer added.

The office of Tampa Bay-area US Rep. Kathy Castor, a Democrat who has previously supported pro-labor legislation, did not respond to an email request for comment on whether she plans to support the House bill. Nor did the office of Republican US Sen. Marco Rubio. A spokesperson for Sen. Rick Scott said the senator will review the legislation. US Representative Charlie Crist, a Democrat who’s running for Florida Governor, is also reviewing the legislation, per a spokesperson.

In recent years, airport workers unionized with 32BJ SEIU and other labor unions, like Unite Here, have already won fights for higher wages in other cities, such as Chicago, New York City, and Philadelphia. According to 32BJ SEIU, which organizes contracted airport workers, more than 35,000 airport workers at 37 airports have won their union. All in all, over 153,000 airport workers have won raises and other improvements, like employer-provided health insurance and paid sick leave, over the last 20 years.

Frank Bohan, the wheelchair attendant at TPA, has seen this momentum, and finds it thrilling. A long-time union man, Bohan told WMNF during a break at work, “The unions give the middle class power,” he said, over the phone, adding, “The union’s the best thing I ever did, I’m tellin’ you.”

UPDATE: Added comment from the office of US Rep. Charlie Crist, who is currently reviewing the Good Jobs for Good Airports Act legislation.