Home Blog News and Public Affairs ‘Not a short-term fight’: the Tampa Bay Abortion Fund is in it for the long haul 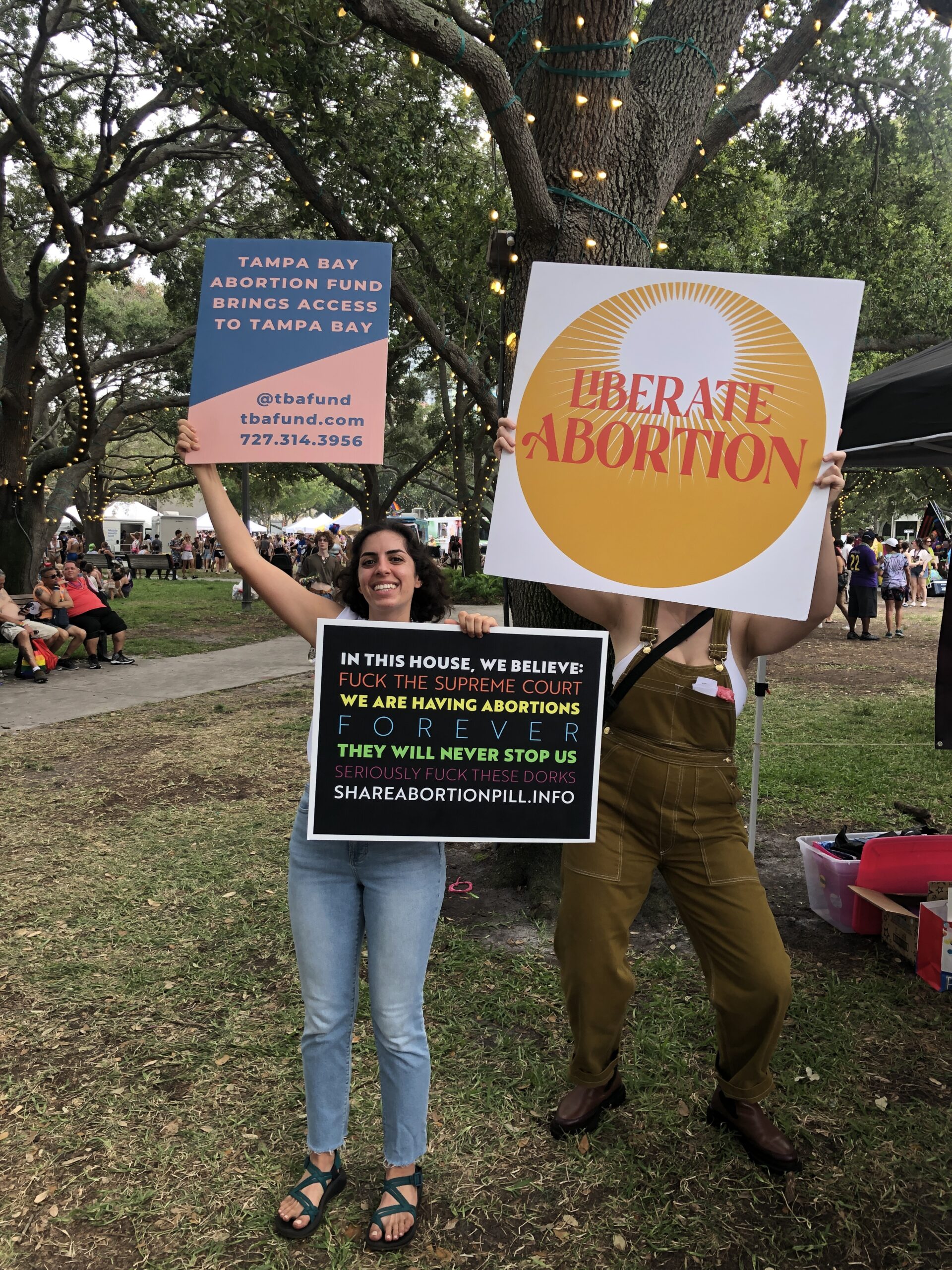 Shock. Fear. Desperation. And for anti-abortion advocates, a sense of triumph.

But, according to a local abortion fund, the news also brought something else: a massive influx of what they call “rage donations” from members of the Tampa Bay community.

“We’ve raised enough money to fund about 280 abortions,” Livia, a volunteer with the Tampa Bay Abortion Fund, told WMNF on Wednesday. In the last week, several local businesses have organized fundraisers for the TBAF, including Shuffle in Tampa, Bandit in St. Pete, and more. “It’s been really exciting to see the community support in a time when abortion access is so restricted across the country,” she said.

The Tampa Bay Abortion Fund is a nonpartisan organization, first established in 2018. They’re part of a national network of about 90 abortion funds, driven largely by trained volunteers. They strive to remove financial and logistical barriers for people seeking abortions.

The nonprofit group here in Tampa Bay directly funds abortion procedures, and works to remove barriers such as the need for childcare or transportation that can make it harder for people — particularly those who are low-income — to seek abortion services.

McKenna Kelley, who volunteers with Tampa Bay Abortion Fund, told WMNF their group wasn’t caught off-guard by the U.S. Supreme Court ruling. “We’ve been preparing for this decision [on Roe v. Wade] for months, if not years,” said Kelley.

And they count themselves lucky. While abortion funds and clinics in some other states have had to shut down their operations since Friday’s ruling, due to legal concerns, the local abortion fund has not.

They’ve continued to raise money. They’ve answered calls from those who are panicked, and have received direct messages from people on social media who want to help. They’ve attended community events, like St. Pete’s Pride Parade this past weekend, to boost credible information about abortion access in Florida and the work they do locally.

Kelley said this has helped her, and those in the community, cope with the news. “Being able to be out talking to people, sharing information, making sure people know who we are, how to contact us, making sure they have information about self-managed abortion and what their options are in Florida, especially with our 15 week ban coming up — that has been helpful to me personally, and I know it’s helpful for our community.”

Abortion is still legal in Florida. But a new Florida law that would ban most abortions after 15 weeks of pregnancy, with no exception for cases of rape or incest, is set to go into effect Friday, July 1. Prior to that, abortions had been permitted up to 24 weeks.

Florida’s 15-week ban was signed by Florida Gov. Ron ReDeSantis In April. On Thursday, one day before the law was set to take effect, a Florida judge ruled in favor of temporarily blocking the law — but not before it takes effect as scheduled.

That comes after several groups, including Planned Parenthood, the ACLU, and healthcare providers sued the state over the law, arguing it violates a right to privacy clause in Florida’s state constitution.

Judge John C. Cooper, who’s overseeing the case, agreed. “Women have a privacy right, under the state constitution, to not have that right impacted up to 24 weeks, at least,” Judge Cooper said Thursday. According to the Tampa Bay Times, a spokesperson for Governor Ron DeSantis — who supports the strict abortion ban — has said his office plans to appeal the decision.

Hillsborough County State Attorney Andrew Warren, who recently pledged not to enforce an abortion ban, has called the law “unconstitutional on its face,” because of the privacy clause within Florida’s constitution.

In it for the long haul

In the meantime, the Tampa Bay Abortion Fund isn’t going anywhere. “This is not a short-term fight. This is something where we need to be in community with each other,” said Kelley. “We need to be dedicated to ensuring that abortion access is there for anyone who needs it for the long haul.”

While the nonprofit has temporarily ceased training new volunteers to contribute to their work, they say there are other ways that locals who are passionate about reproductive justice can get involved.

Abortion Access Front, for instance, is another nonprofit that offers trainings to help people learn about reproductive justice from leaders in the movement, and how they can themselves get plugged in.

Both Kelley and Livia emphasize that all skills are needed in the fight for reproductive justice, from graphic design, to communications, T-shirt production, appointment-setting, and cybersecurity.

“Even if you think, you know, this has nothing to do with reproductive justice, I’m pretty sure we will find a way to use your skills,” said Kelley. “And it is needed. So you know, come on in. We will find a place for you if you’re dedicated to this work.”

Andrea Mercado, executive director of the nonprofit organization Florida Rising, shared a similar sentiment. “Everybody has a role to play. And so, whether you feel motivated to go stand in front of a courthouse expressing your dissent, or donating to an abortion fund, or, you know, running for office, I mean, I think that there’s different ways that people can exercise their their voice,” Mercado told WMNF. “And the important thing is that we we take action together and we build an unstoppable movement in defense of abortion rights.”

The Tampa Bay Abortion Fund says the best way that people can support their work, specifically, right now is by becoming a monthly donor, and turning “rage donations” into sustaining financial support.

“We’ve seen in the past when abortion restrictions come down, we get a wave of rage donations, which are amazing,” said Livia. “But often, those donations dry up in about a couple of weeks, couple months later. And sometimes we’re forced to make decisions about closing the helpline, or adjusting how we fund people to make it through to the end of the month.”

Currently, the Tampa Bay Abortion Fund does not means-test who they help. They help anyone, regardless of income level, although the fund is largely meant to provide assistance for those who lack the financial means to pay for an abortion themselves.

According to the Guttmacher Institute, abortion patients are disproportionately poor and low-income — 49% live below the federal poverty line. And insurance doesn’t often cover abortion care. In 2020, a first-trimester abortion cost about $515 on average, researchers from the University of California found, and that’s not counting additional expenses, like lost wages, childcare, and transportation.

Most patients pay for abortion out-of-pocket. Furthermore, the federal Hyde Amendment prohibits the use of federal funds for abortion except in cases of life endangerment, rape or incest. Some states use their own Medicaid funds to cover abortion, but Florida does not.

The TBAF works with several healthcare clinics in the Tampa Bay region that offer abortion services. And not all of those they help are local. As the Tampa Bay Times reported last Friday, the motivated network of volunteers has helped hundreds across the South access abortions each year, including some who travel from out-of-state.

Prior to Roe’s fall, the U.S. had over two dozen “abortion deserts,” or major cities where someone would have to travel 100 miles or more to access abortion care. Medication abortion is another option, but there are concerns that conservatives could further restrict access to that, as well as contraceptives, in addition to pushing for an even more restrictive abortion law here in the Sunshine State.

Of what comes next, Livia with TBAF had this to say: “Let’s use this anger and channel this anger and, you know, wake up every morning and and think about how we can make sure that everybody has access to abortion.”

For more about the Tampa Bay Abortion Fund, you can hear TBAF founder Kelly on WMNF’s Midpoint program with Dr. Rachel, a local abortion care provider.