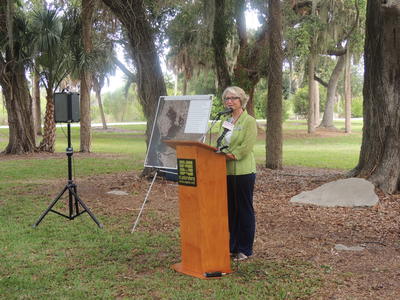 Water and habitat restoration in Tampa Bay are getting a $625,000 boost this year. The Tampa Bay Estuary Program announced nine projects during a press conference at Clam Bayou in St. Petersburg Tuesday. Holly Greening, executive director for the program said despite continuing need for water quality improvements, Tampa Bay is the cleanest and clearest it’s been since the 1950s.

“We’ve got over 18 projects now that we’ve been able to fund over the last two years through the environmental restoration fund and resulting in many more acres of coastal habitat restored, lots of water quality improvements and some very important research projects.”

“Some of the landscape ordinances that are in place in some of our counties are an important aspect of that.”

Those ordinances ban the use of phosphorus-containing fertilizers. Both St. Pete and Pinellas County have passed summertime bans as well as Tampa and numerous other areas. But one of the sponsors of the environmental restoration fund that provides these grants is Mosaic, a phosphate industry powerhouse based in Tampa. Greening says even though they seem a strange bedfellow, the company has been involved in restoration efforts for 20 years.

About 30 people including grant sponsors, environmentalists and elected officials lauded the initiative. Pinellas is the state’s most built out county. But St. Pete city council member Steve Kornell praised collaborative efforts to ensure development and the environment can be allies in the region, not enemies.

“…the best water quality since the 1950s while we’ve added a million new residents.”

An assistant to David Jolly, a Congress member representing Pinellas County, Paul Matthews, moved to the area in the late 60s.

“I saw the degradation that was happening during the 70s. The seagrass beds went away. The mullet schools went away. I went in the Navy. I’ve been gone for 25 years, being able to come back home on periodic vacations to see how things change. When you live here and you see the slow progress, you may not notice it so much. But now that I’ve come back, I can go out on Coffee Pot Bayou. I can fish on the grass flats. If you go out and take a flashlight you can see the shrimp have been restored, the mullet schools have been restored and also the other fisheries.”

Projects funded through the 2014 grants include a waterfront park in Safety Harbor, coastal and inland portions of Manatee County and Tampa Bay. It will also fund a water and habitat quality study of the Bay and track population trends and threats to waterbird nesting colonies.