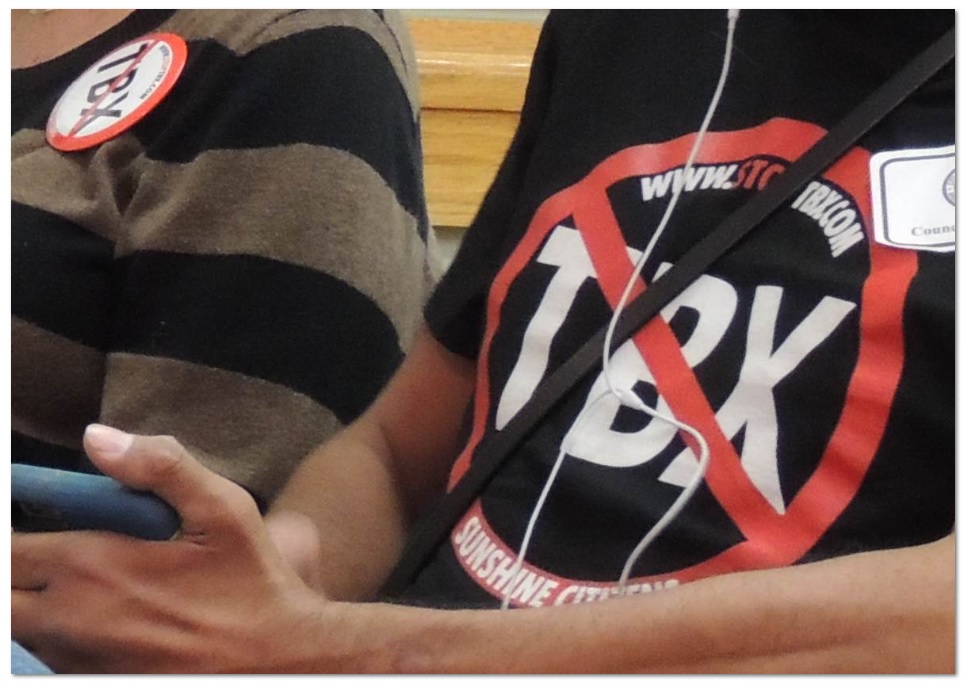 A plan to add 90 miles of toll lanes to the existing interstate highways in the Tampa Bay area has taken another step forward; despite overwhelming opposition from the public, the Hillsborough County Metropolitan Planning Organization (MPO) voted Tuesday night to include the TB Next plan that used to be called TBX in its five-year Transportation Improvement Plan (TIP).

Hillsborough County Commissioner Les Miller was one of three MPO board members to vote against including what the Florida Department of Transportation is now calling Tampa Bay Next.

“Every time DOT came back to us, the presentation they gave us could have been done by an elementary school child. There was nothing they put in place that showed me, as far as I’m concerned – I don’t know about the rest of us – anything that they would do at this particular point in time. Now, we’re at a shake-up in FDOT, in the Secretary’s office and in Tallahassee. I don’t know what else they gonna do to do anything differently. I really don’t.

“Now, everyone else can vote they way they want to vote, but, that’s my comment. I made that motion. We gave some stipulations a while back and they have yet, today, to uphold those stipulations that we put into place. I made the motion. I know what they were and they didn’t bring them back. Now, we have a change up in there. They got ‘TB Next’: where’s the plan? Where is the plan? I have yet to see a plan, but, we want to talk about $300 million? Where is the plan?”

Listen to what Les Miller said:

Twelve MPO board members supported including Tampa Bay Next in the TIP.

According to the Tampa Bay Times, during the three-and-a-half hour public comment about 50 people spoke against TB Next and a dozen spoke in favor.

Mike Peterson with the Greater Tampa Realtor Association reiterated that group’s support for Tampa Bay Next and interstate improvements.

Here’s some of what Mike Peterson said:

“Recall these improvements have been anticipated for at least 20-years, yet, you asked for additional study and that’s underway. Some of you had concerns with leadership of DOT on this project; a lot of change has occurred. Some of you wanted more emphasis on transit; we now have a regional transit study underway. But, don’t confuse your desires for transit funding with the funding of these interstate projects that come under the Strategic [inaudible] Funding. Those kind of projects have to do with moving freight and high-traffic volumes and you can’t just freely grab that money and take it to transit, no matter how much you may wish you can.

“So, we need to be talking about both. We need to be funding both our interstate system and our region’s transit needs and they don’t need to be mutually exclusive. Touting Tampa as the “West Coast Hub” around which the Tampa Bay Metro revolves, comes with obligations in addition to the glory.

“Over a million people are expected to come to this region in our current planning horizons. Who can say that our interstate spine doesn’t need to be improved to accommodate that? So, while yes we need to also talk about transit and do a better job pushing that forward, we don’t need to kill our interstate projects, that are well underway, under these proposals.”

But Doug Jessup is one of the many members of the public who spoke out against putting TB Next on the list of transportation priorities.

Here’s some of what Doug Jessup said:

“We are caught up in a vicious circle of adding interstate capacity, which damages the urban core while encouraging more suburban sprawl, which clogs the roads with more traffic, which leads to demand for more interstate capacity. I contend that we’ve reached the sprawl event horizon and the whole mess is set to collapse in back upon itself. It’s time to do something different.

“You can begin by taking TBX out of the TIP, but, what would follow? I suggest, as we’ve already heard that Joshua Frank’s proposal for ripping out I-275 from Bearss down to the junction is a very good start. Urban freeway removal happens to be the most effective way of using transportation money to produce economic gains. Everywhere this has been tried it has been a success: In Paris, in Seoul, in Toronto, in San Francisco and even in Oklahoma City. Think of that, we lag behind Oklahoma City. How sad is that?”

Three hundred million dollars are earmarked for buying homes and land along the planned expansions along Interstates 275, 75 and 4. It also includes repairs to the Howard Frankland Bridge.  Many residents in the audience oppose the toll lane highway expansion, holding yellow signs reading “I want transit.”