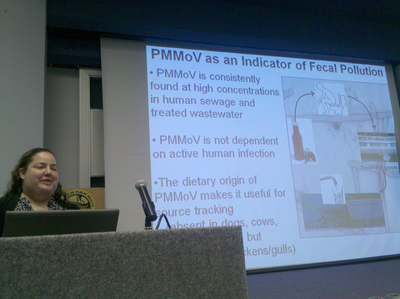 Water restrictions, a spike in population, below-normal rainfall – these are just a few of the reasons Tampa Bay is in the midst of what some USF professors are calling a “water crisis”. Last night, at the USF College of Public Health Auditorium, a group of concerned scholars met to present their research on one way the city may be able to combat rapidly depleting aquifers.

However ironic it may be for a metropolitan area surrounded by water to lack it, the consensus is in – Tampa Bay is running out of water. And the city will be considering the option of using highly treated effluent as one component of its domestic water supply, a method many are calling “toilet to tap”.

From finding trace amounts of virus-like particles and heavy metals in our reused water, to the feminization of fish, one thing is certain: there is more research to be done. There will be a follow-up workshop to last night’s forum, which will cover the positive and negative effects of water reuse on Tampa Bay. The event has not yet been announced.