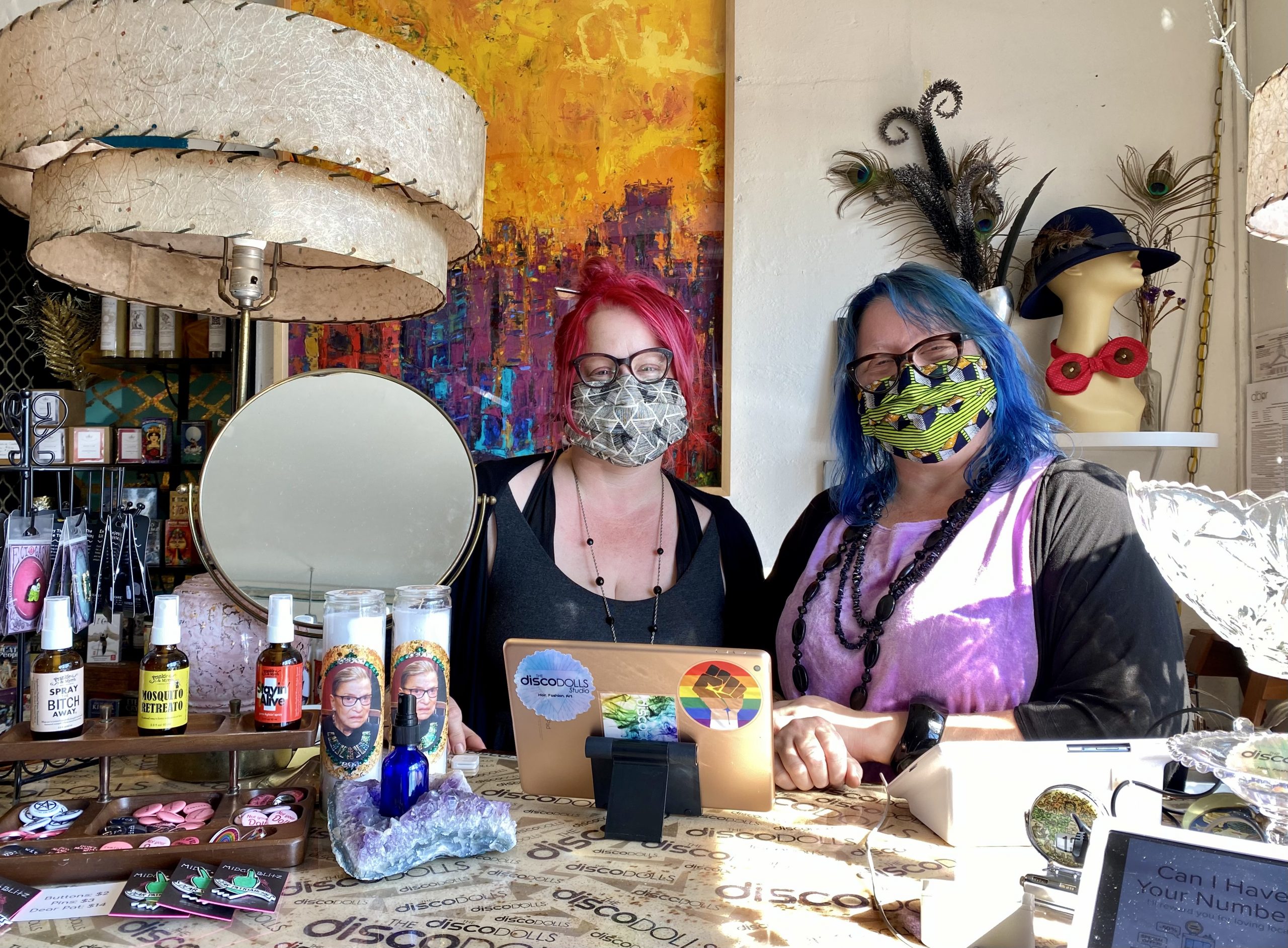 Tampa’s own Disco Dolls Studio recently signed on to join Florida Business for a Fair Minimum Wage, but have believed in the cause for years.

Kristine Ownley pulled the glasses from her face, tucked a fallen strand of pink hair behind an ear, and wiped the tears from her eyes. The bright, jangly sound of the baubles on her wrist juxtaposed the crack in her voice.

“We just need to love each other and value each other more. Those solutions become apparent. It’s all connected.”

Ownley and her sister, Leigh Anne Balzekas, are partners in Disco Dolls, a shop on Tampa’s Florida Avenue that’s part salon and part art studio with a dose of fashion boutique and apothecary thrown in. Their small Tampa business spent its first five years in West Tampa before moving to Seminole Heights five years ago. The sisters are passionate about raising the minimum wage. Balzekas said it goes to the heart of some of their core values including equality, sustainability and community enrichment.

“For us it’s good business practice because if you’re putting more money into your local economy, as a small business, we see that come back to us right away,” she said. “We see it when our neighbors are doing well. And that’s what we want. That’s what we’re here for.”

Amendment 2 would raise Florida’s current minimum wage of $8.56-an-hour- to $10-an-hour next September and increase that wage by one dollar every year until it hits $15-an-hour in 2026. A recent St. Leo University poll shows 48 percent of respondents strongly support raising the minimum wage while nearly 23 percent somewhat support it. That’d put the Amendment well above the 60 percent it needs to pass.

Florida has historically ranked among states with the most income inequality, particularly when it comes to women and minorities.

Leigh said she supports raising the minimum wage because it works to decrease the wealth gap and promote intersectional equality.

The case against Amendment 2

Opponents of Amendment 2 have pointed to studies saying some small businesses might not survive the raise in overhead operating costs that would come with Amendment 2 and that the cost of good would go up.

Balzekas and Ownley said Disco Dolls is a prime example of that not being the case. She starts employees well above minimum wage at $13-an-hour plus commission and has survived a decade. Ownley added that goods should cost more. She said low wages have created a market for low-cost goods that promote inhumane labor practices.

“We’re enslaving people so we can keep these artificially low prices. We’re paying a cost. It’s the cost of our humanity.”

Opponents of Amendment 2 have also argued minimum wage requirements shouldn’t come from a state mandate, but be left to local counties and cities. But Balzekas said the clock has run out on those options.

“We’re at that point where we’re at a breaking point and they have to do something,” she said. “Yes there’s a lot of other ways, but those have not been accomplished yet.”

The best haircut ever

Jenny Harmes sat in a salon chair with her legs crossed. Her long black hair, wet, mid-cut, fell over the jet-black salon cape.

“This is awesome. This is the best haircut ever,” she said.

But, not discounting Ownley’s skill with a comb and scissors, it wasn’t the style that did it for her Wednesday morning. It was the substance.

“It just made sense to me to support Amendment 2, but then hearing their passion, I don’t know, I just hope everyone can hear that because it will drive even more people to action,” Harmes said. “I think there are people who it’s not as much of a common-sense choice for, maybe hearing their voices will change their minds.”