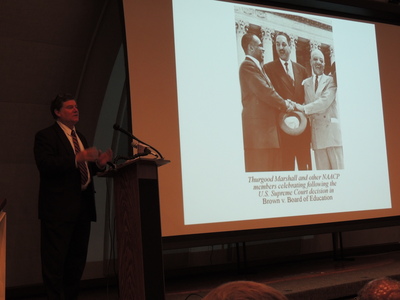 It’s been 50 years since President Lyndon Johnson signed the Civil Rights Act of 1964. Officials from Hillsborough County and Tampa along with the federal Equal Employment Opportunity Commission took a trip down memory lane during an anniversary celebration today. Delano Stewart was the first black public defender in Hillsborough County.

“It was monumental legislation, but we cannot go to sleep. If we go to sleep there is a Tea Party. I listen to the Republican Party saying they want to do something for women, they want to incorporate men and then they have a guy from Duck Dynasty at the mid-year saying that we were happy when slavery existed. And if we don’t fight that, these people will raise up.”

Stewart spoke during an hour and a half presentation at the downtown Tampa Library. He gave an impassioned plea to younger generations to keep civil rights moving forward – not just for the black community, but for all groups.

“You have to overcome the evilness of those who are shortsighted and if you go back – We the People. It doesn’t say, we the white people ….”

A federal official also weighed in. John Schmelzer is with the Equal Employment Opportunity Commission. He took a look at the years leading up the Civil Rights Act from the treatment of young students during desegregation after Brown Vs. The Board of Education …

To the Montgomery, Alabama bus boycott after Rosa Parks refused to give up her seat.

He praised activists, including Dr. Martin Luther King Jr. for this letter penned from a jail cell.

“But we still creep at a horse and buggy case toward getting a cup of coffee at a lunch counter. When you take a cross country drive and find it necessary to sleep night after night in the uncomfortable corners of your car because no motel will accept you. When you are humiliated day in and day out by nagging signs reading white and colored. When your first name becomes the N-word and your middle name becomes boy. When you are harried by day and hauhnted by night by the fact that you are a negro living constantly at tiptoe stance never quite knowing what next to expect and are plagued with inner fears and outer resentments. When you are forever fighting a degenerating sense of nobodyness, then you will understand why we find it difficult to wait.”

And it all led up to one very stubborn and determined president. Schmelzer talked about how President Johnson used the construction of I-95 to influence votes for the act.

“I’d hate for you to be denied this great road for commerce and what I’m thinking is, maybe at Baltimore we just stop it there and we move as we’re going south, we take a right turn and we head west over to Tennessee and we bring you down to Texas and therefore, Virginia, North Carolina, South Carolina, you’re not going to get this.”

But most of all, Schmelzer put chills on the backs of about 100 people from all different races. He reminded them that not only was the black struggle horrific, it was also trying on people who supported their fight.

While the focus is largely on the African-American community, speakers also highlighted struggles among other groups prior to the Civil Rights Act including the Japanese and women.