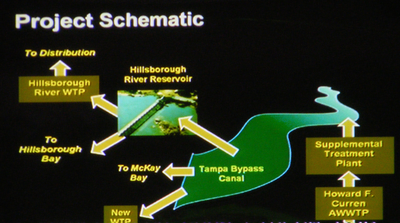 Is using reclaimed water safe? Does it really just send sewer water to drinking water faucets? Officials from the Southwest Florida Water Management District (SWFWMD) and environmental engineers say it is safe, and will be necessary to have over the next 50 years is current supplies are to run out. Tampa City Council held a reclaimed water workshop this morning.

Reclaimed water from wastewater can be treated and put back into the aquifer directly, through injection into the ground, or indirectly, via deep reservoirs, and even through wetlands. This recharges the aquifer with water that can be used for what is called indirect potable reuse, not toilet to tap. City Councilmember Charlie Miranda has supported reclaimed water reuse for months, and thinks the City must act now to plan for the future.

Phil Waller is with environment engineering firm MWH, and says this water is 99.9% pure and drinkable, and may be used in many ways. Although the treated water is ready to drink, some on the council don’t want to waste potable water on lawns. But City Councilmember John Dingfelder said he would rather have toilet water sent to lawns than taps for drinking. Waller says reclaimed water is safe for lawns.

During public comment, some were concerned that reclaimed water has killed certain kinds of vegetation, and may not be best for lawns. Waller said that further treatment could help.

The reclaimed water is rich in nitrogen, which can be good for lawns. But when the water is discharged directly into the bay, the nitrogen poses a problem. The EPA has proposed to limit nitrogen and phosphorus levels in the water which are known to cause harmful algae blooms, and endanger public health. Waller saw the need for attention to the issue.

Anthony Andrade of SWFWMD said this problem stems from dumping reclaimed water into the bay.

The Tampa Bay Estuary Program has recently stated that reusing the reclaimed water is beneficial, and Andrade agrees.

Earlier this month, Mehul Patel presented the most recent advances in reusing reclaimed water, drawing from his experience with the water management district in Orange County, California. City Council Member Charlie Miranda was at his presentation.

And Miranda is positive that reclaimed water is safe for the public. He is concerned that without a plan for using reclaimed water, that there might be issues with ownership of the resource.

But with a projected 27 million dollar shortfall in next years city budget, some citizens were worried that the city can’t afford additional reclaimed water infrastructure, especially with the reservoir full. Miranda says this is an investment that can’t wait.

The budget shortfall means the city must make some difficult cutbacks, but Councilmember Linda Saul-Sena says water will remain an essential component.

This is an issue that she thinks needs more consideration and additional information before it’s presented to the public. Councilmember Miranda wants the voters to decide in the city elections in the spring of 2011 whether to begin using treated sewage water.

But Miranda suggests the public is ready to vote.

Miranda will ask the City’s legal staff to draft a ballot question next session.