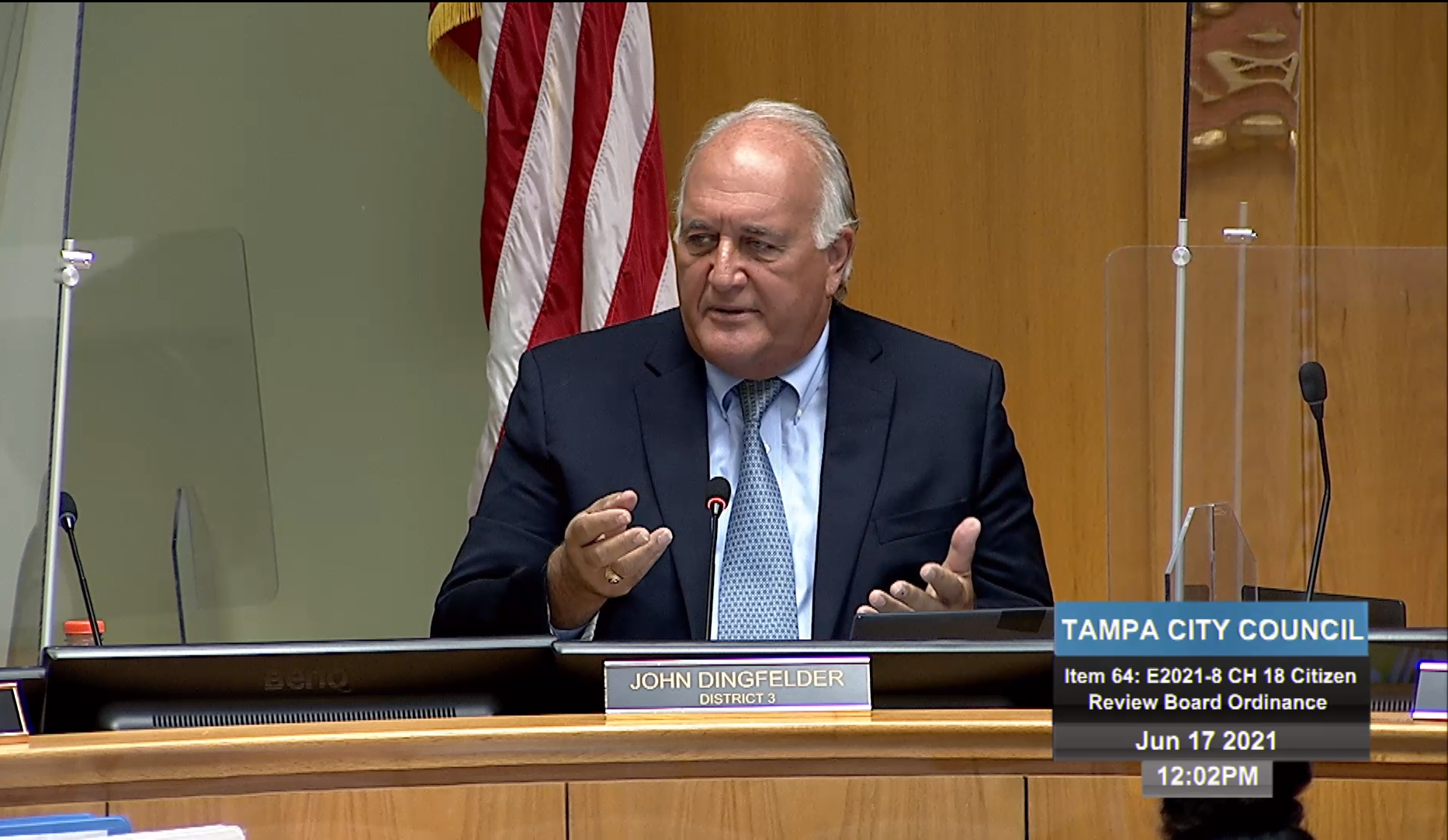 Tampa’s City Council Thursday voted to change course on the makeup of its Citizen Review Board.

Councilmembers acquiesced a request from Mayor Jane Castor to give her more sway over the police oversight board.

The move bypassed citizen calls for an independent board and could have dubious legal standing. Councilmembers changed the ordinance’s language from what was voted on in the first reading.

“The change between first and second reading from 7-4 to 5-5-1 could be legally defensible,” City Attorney Gina Grimes said. “But it’s not iron clad.”

A long way back to the start

For a year now, activists with social justice groups and the American Civil Liberties Union have called for reforms to the CRB, calling it toothless in its current form. The ACLU called for the CRB to have subpoena power; and independent attorney and more council-control over the board’s members.

It got none of that.

In May, the Council voted to accept one of those conditions: changing the makeup of the CRB to have seven members appointed by councilmembers and four by the mayor.

But on Thursday, the council approved selecting five members, allowing Castor to select five and giving the NAACP power to nominate one member, which would need approval from the mayor and City Council.

“I want to be very clear, 5-5-1 is not a compromise. It’s a capitulation,” James Shaw of the Tampa ACLU said. “Seven-4 in your favor instead of the mayor’s was a compromise.”

Shaw pointed out other CRBs in Florida have far less involvement from the mayor if any.

“In Fort Myers, the mayor appoints one out of 11 CRB members, in Miami, two out of 13, in Naples, Daytona Beach, Gainesville, Key West none,” he said. “City Council appoints all of them. The mayor appoints none.”

Shaw said the one “watered-down” change means the long-awaited overhaul of the CRB is essentially dead-on-arrival.

Council members voted to adopt the new measure in a 4-3 split after more than three hours of public testimony and discussion. Members Bill Carlson, Guido Maniscalco and John Dingfelder opposed. Carlson pointed out that vote was a far cry from what the community expressed it wanted.

Members of the police and firefighter unions supported the move. Members of the public, however strongly opposed it. Carlson said he’d been receiving calls non-stop asking the council to support a stronger CRB and wrest some control from the mayor.

“It makes no sense to allow the mayor to control the CRB when she already controls the TPD,” Tampa attorney Jamie Clapholt said. “The entire point of the CRB is that it’s supposed to be an external, independent body.”

While the council voted to go along with Castor’s demands, an ACLU poll showed strong support for an independent CRB. The poll found 76 percent of Tampa voters believe a single person should not have majority control over appointing members and 74 percent agree that the CRB should have subpoena power. The ACLU said a stronger CRB could go a long way toward fairness, independence and transparency in Tampa’s police department, which is not without controversy.

TPD has a documented history of racial profiling and has increased its use of force nearly every year since current chief Brian Dugan took over.

Asking for the council to support more police oversight, Tampa resident Tatiana Morales said she’s been shocked at the violence she has seen used by TPD. She said she fears how far the department will go without meaningful oversight.

“What we’re demanding here is for accountability to be held,” Morales said. “Because I don’t want to live my life living in the city that I truly love, that has so much rich, beautiful black history, wondering if I’m going to end up like Andrew Joseph III. End up killed on our streets. That’s not what I want. I don’t want to be another Black body.”