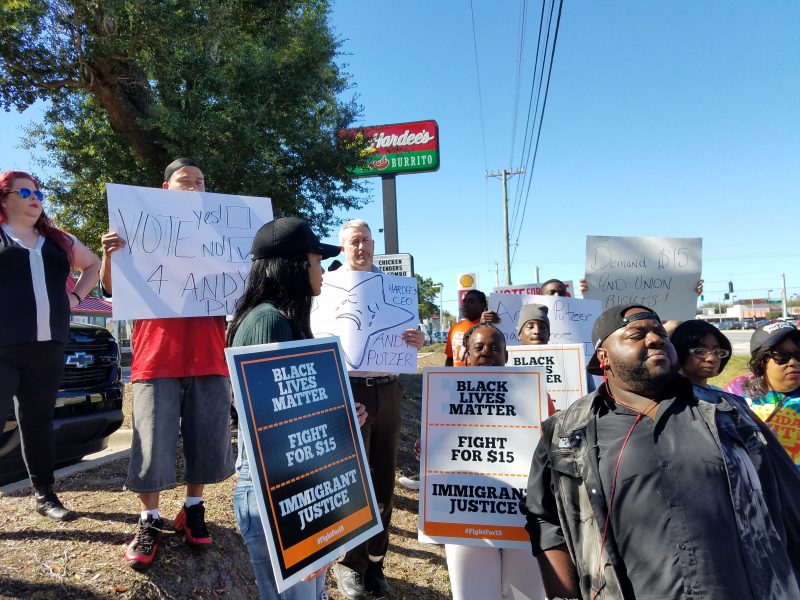 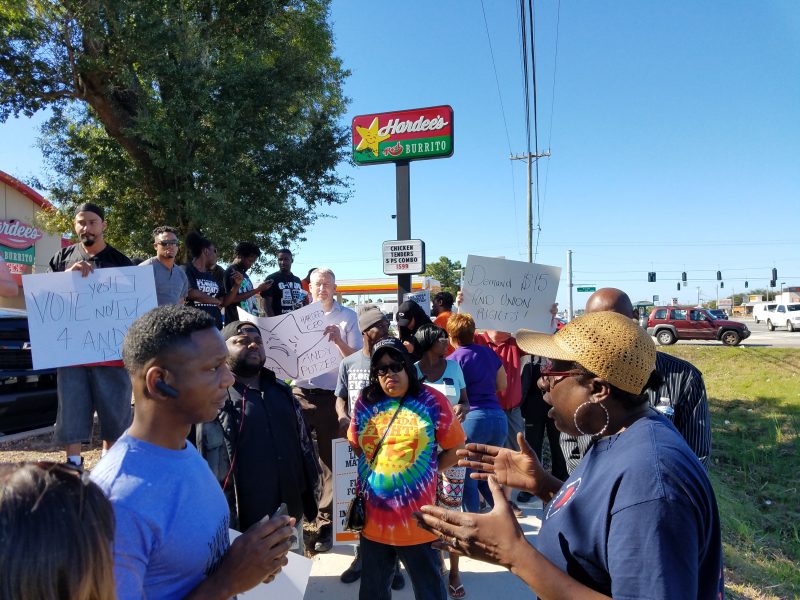 Fight for $15 members demonstrate outside a Hardee’s on West Hillsborough Ave. in Tampa. By Seán Kinane / WMNF News (12 Jan. 2017)

The Senate hearings for Donald Trump’s nominee for labor secretary, Andy Puzder, will likely be delayed until February; but workers opposed to his confirmation still demonstrated outside a Hardee’s restaurant Thursday afternoon on West Hillsborough Avenue in Tampa. Puzder is CEO of a company that includes the Hardee’s chain and labor activists criticize him for supporting harsh policies toward workers.

Debbie Singleton works as a shift leader at this Hardee’s but would not say how much she makes per hour. Unlike most of the other 25 people at the demonstration she thinks that while the minimum wage should go up, it shouldn’t be 15 dollars an hour for everyone.

“I do agree that it needs to be a lot more than what minimum wage is now. I feel like anyone that begins at the entry level of a manager, should be able to start off at $15 an hour.” 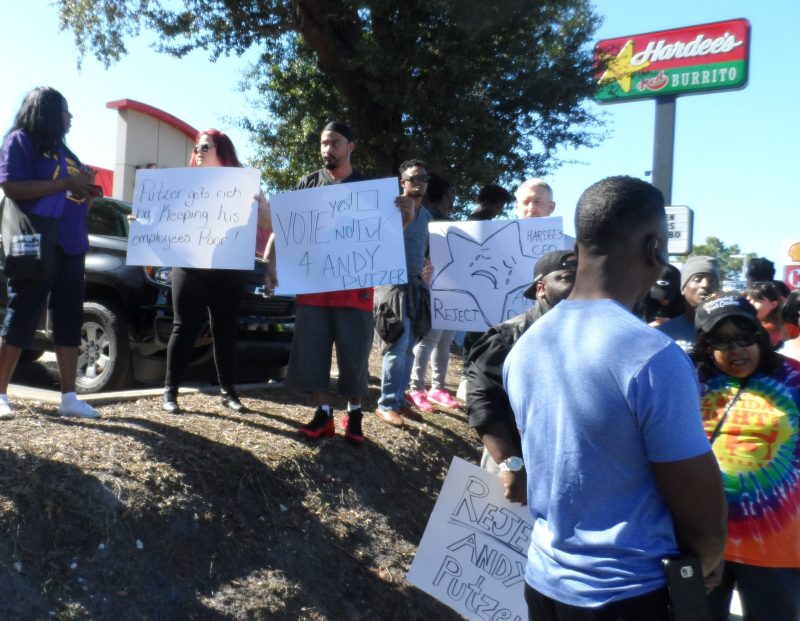 Fight for $15 members demonstrate outside a Hardee’s on West Hillsborough Ave. in Tampa. By Seán Kinane / WMNF News (12 Jan. 2017)

If minimum wage were raised to $15 an hour, would that help you?

“It would help me, because of the position that I’m in, but, again I’m stating that $15 an hour– when you go to a lot of different businesses and you see the performance of people’s work, everyone is not qualified for $15 an hour. I really do strongly believe that minimum wage should be a lot higher, but, $15 an hour for a lot of workers?”

Let me ask you this, the [CEO] of Hardee’s has been nominated by Donald Trump. Do you think that he would do a good job to help out workers?

“Well, I feel like this: because I’m the kind of person that likes to talk to a person first, face to face, as far as the person that’s dealing with my check. Any issues that I’ve ever had, on any job, when you want a change you have to open up your mouth and say something. But, in order for someone to help you, actions speak louder than words. Your performance? You sell yourself.

“And yes, like I said, I really do believe we make money for them. They live good. I can’t live the way that they live. I struggle every pay period to be able to handle my bills. You have to be a manager for so long to even be able to get sick time, paid time off, you know. I was diagnosed with a blood clot in my leg about 3 years ago. When my leg is feeling bad, I can’t afford to stay off from work.

“So, I want to be able to have the opportunity to be able to sit down with my CEO, at Hardee’s, to explain to him my situation. It has to start from there.”

“No, it’s not fair working conditions. It’s just not me, other people go through the same thing. I’m a single parent. I pay full rent; I’m not on any kind of any assistance.

“I feel like if they can eat, I want to be able to eat, too. If their lights stay on, I want my lights to stay on. So, it is a struggle. And, like I said it begins with the person that pays me. I want to give him the opportunity, so I can sit down in front of him and discuss how I feel about the situation.”

Phyllis Lewis has worked in customer service as a cashier at KFC for 11 years and makes $8.65 an hour. She says that’s not enough to make a living without government assistance.

“No, KFC is not enough money for me. Right now, I get my health insurance from Tampa Families. I was getting food stamps; right now they’re only giving me $16 dollars, but, I believe I’m gonna get that back again.”

And what are you asking for now?

“I asked them for $15 an hour, for the cost of living. Because if we get $15 an hour, just imagine: I won’t have to get food stamps, I won’t have to get health insurance. That will boost me up so the money they’re paying me on my food stamps, my health insurance and all like that; I can be able to afford my own insurance and it would help me buy groceries, too.

“A loaf of bread, the cost of milk is going up, all this stuff. Gas is going up. I’m tired of living in poverty. I’m tired of struggling. I’m here to fight for $15 an hour. I’m tired! I’m disgusted! It’s not fair!

“The man that’s over at Hardee’s, they appointed him over the fast food people, he ought to be ashamed of himself. He knows that the cost of living is going up. He’s making millions.

“It’s 64-million people, out here, working under poverty. The 1% is getting richer and richer. We’re getting poorer and poorer.”

So, you don’t think that Donald Trump’s nominee for Labor Secretary will do enough for the workers?

“No. Because he didn’t do enough for his workers. He didn’t do nothing for Hardee’s. He’s got his people on food stamps, government assistance, no vacation time, no sick time, under-paid and they’re getting richer. No.”