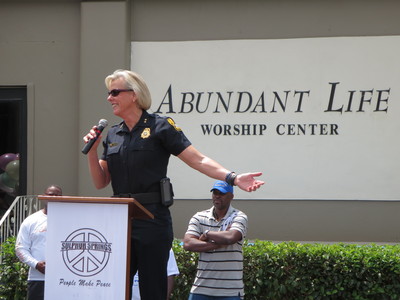 Escalating violence in some Tampa neighborhoods unite the Tampa police and residents in raising awareness. Saturday afternoon in the Sulphur Springs area roughly 200 plus residents, community leaders, the police chief and even the mayor all gathered to march in solidarity to stop the violence. The community as well as elected officials recognize the importance of bringing attention to the uptick in violent crime as the first part of the remedy.

People who participated in the 6 block trek from Abundant Life Church to Idlewild Sulphur Springs Church marched side-by-side with local luminaries like Mayor Bob Buckhorn. He recognizes the historical challenges of Sulphur Springs but is encouraged with the teaming up of police and residents.

“I think the police and the community have a good relationship. I think it can always get better and we work hard everyday to make it better. It’s not where we want it to be because no one’s perfect. But we’ve come a long long way from when 1988 or 87; when this community was living through some tough civil issues. I think the police standing shoulder to shoulder with the residents, that want to do right, is a great team.”

The idea for the police to reach out to the Sulphur Springs community has been in the works for a while. But the shooting death of 14 year old Richard Newton last month provided both the spark and the gravitas for this event. Lieutenant Randy Peters, Public Information Officer with the Tampa police department, says the increased crime rate keeps the residents from enjoying the Florida lifestyle.

“This is one of the areas know to have some uptick in crime or increase in crime. One of the areas we’ve seen violence…not too long ago a young man was killed, who was 14 years old…we just can’t have those kind of things happen…kid’s get harmed out here. We want people to feel safe in their community. We want people to go back and forth; to be able to come back home and sit on their porch and enjoy themselves like you and I do.”

Grabbing attention is often the first step in starting a dialogue about change, according to Corby Norphlet. He is the President of CowBros, an faith based organization whose mission is spread on horseback. Norphlet said showing up at events like this can kickstart the conversation.

“In this neighborhood right here, you don’t see horses everyday. You don’t see…you barely see dogs out here. When you ride these big ‘ol animals…these 2000 pound animals…we get kids attention. And maybe the kids get their parents attention. Maybe the say; ‘let’s go ride horses. Let’s go do something other than killing ourselves; other than fighting; other than doing all this crazy stuff. We can’t make a difference but we can be part of the difference. That’s what we are here for. I was in the military for 10 years. I own my own business and it’s time for me to give back. And whatever I’ve got to do to give back; I will do it. If I’m out here in this march (then) I’m going to be part of this march and we’re going to continue. We’re not just going to march today; we’re going to march everyday until we see a difference.”

Tampa police chief Jane Caster was straightforward in her assessment of why community engagement is important.

“Community. What we’re trying to get across to all citizens is that the Tampa police department exists to serve the citizens. The only way we’re going to keep our community safe is having that partnership with the citizens and the police officers working side-by-side. What better example than this march today.

The Tampa police department are planning similar events in other of the city’s neighborhoods.