Tampa Police say they arrested four teenagers late Tuesday night for spray painting on a street mural outside police headquarters in downtown Tampa. The mural on Madison Street at Franklin Street was painted by supporters of the police. That “Back the Blue” mural was painted without a permit from the city, but its creators have not been charged by police.

In a press release Wednesday morning about Tuesday night’s incident, police say “officers observed four subjects spray painting graffiti on the road way [sic]” at the site of the mural. Police say they detained eight subjects, then reviewed video and identified four of them who committed “criminal mischief on the road way [sic] by defacing the road with spray paint.” Those four were taken into custody by police. One is a juvenile, who police did not identify, except that that teen is from Tampa and was given a notice to appear in court and released to their parent.

The other three are 18 and 19 years old and police say they were “transported to booking after learning they had no ties to Hillsborough County.”

In a press release Monday about a different incident, Tampa Police said, “The Chief had a press conference last Thursday and made it clear, ANY group who paints without a permit will be arrested for criminal mischief.” That came after seven Black Lives Matter protesters were arrested Saturday at Curtis Hixon Waterfront Park for criminal mischief after police say they were seen throwing paint along a sidewalk. A witness told the Tampa Bay Times the Curtis Hixon painting was a test to see if Tampa Police would respond the same way they did when Blue Lives Matter supporters painted a “Back the Blue” mural on a street outside police headquarters without a permit. On Wednesday, a witness and a participant told WMNF they were attempting to paint a rainbow flag mural in solidarity with LGBTQ people with the words “Black Lives Matter” on the flag. 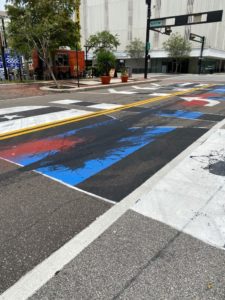 Last Wednesday, Police sent out a press release about a previous incident where Black Lives Matter protesters defaced the “Back the Blue” mural. Police say the night before:

“a subject wearing all black clothing with a black mask poured an unknown substance (possibly tar) over the “Back the Blue” mural along the 300 block of E Madison St. The subject was seen on camera emerging from the hatchback area of a black vehicle. The vehicle was seen on camera circling the area of TPD Headquarters prior to the act.

“Shortly after midnight, at 12:32 a.m., a second subject graffitied “F*** 12 and BLM” in red spray paint on a mesh roll-up utility door along the north side of TPD HQ.

“The second subject also poured red paint on the “Back the Blue” mural. The case remains under investigation.”