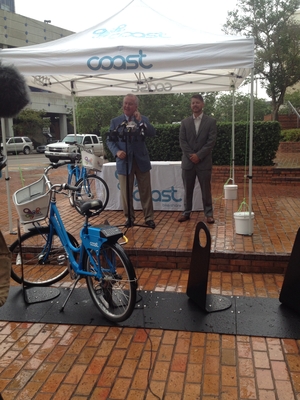 “What a founding membership is, first off, it’s a great way to support the city in making the city more pedestrian friendly. But to the user, it enables someone to ride around, up to 90 minutes per day, throughout the city, and you can break that time up however you see fit, and it gives you access to all 300 of our bicycles throughout 30 locations on downtown, Hyde Park, Ybor, Channelside and Davis Island.”

There are different membership levels and costs.

“The founding membership is $99, like I said, that includes 90 minutes of free ride time. That’s an additional 30 minutes more than our typical memberships will be once we launch. Those memberships, annual, we’re charging $79, monthly is $30, then daily we do an hour membership, and its $5 an hour. So it’s very affordable even for our visitors to jump on a bike.”

“This is another piece of the puzzle for everything that we are trying to do downtown. To make downtown a workable, pedestrian-oriented, retail-driven environment that well help us attract the best and the brightest from around the country.”

Each sky blue bicycle is equipped with a large basket, GPS and a pin pad to unlock the bike. Buckhorn took a test ride for himself.

“I want to see these blue bikes all over downtown, Hyde Park and Ybor City. As people move from very livable neighborhoods in close proximity to downtown, to leave their cars in the garage, get on a bike, get healthy, get outdoors and its going to be a great project. We are going to paint this town blue with those Coast Bike Shares.”

Coast Bike Share is set to launch next month. Their website, CoastBikeShare.com and the smart phone app Social Bicycles has a list of the 30 bike racks around Tampa and a way to make reservations.