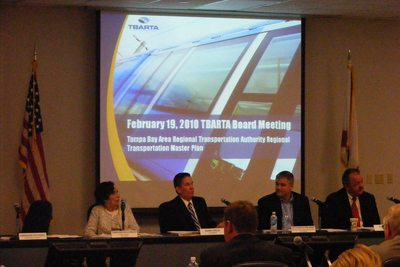 Traffic congestion may never fully ease in the Tampa Bay area, but regional transit officials want to do something about the clogged highway system, by providing some alternatives to cars. Today in Tampa, the Board of the Tampa Bay Area Regional Transit Authority presented its transportation plan for the next 50 years.

If you don’t have a tree that can shade you for this life, you can at least plant a seed that will bring someone else shade for the future. This was the mentality of many TBARTA board members, who are planning for 50-year transportation improvement, that only their children will be able to use. High Speed Rail has been approved for Florida, but separate local light rail systems will need quick approval and construction for a smooth transition between the rail systems, according to TBARTA board member Hugh McGuire.

My concern is that them talking about possibly bulldozers in the median in a couple a years, or whatever Mr. Clifford said, I think that puts a burden on us to be ready at the end of this system to be able to take people where they want to go. You heard the commissioner Donna Hays say we want people to come to the beaches. Well, how do you get them from Tampa to the beaches? And I think the burden is on us to move a little quicker, to be aware that this thing is upon us.

The funding is planned to come from a one cent sales tax referendum on the ballot next fall. If voters don’t approve the ballot referendum, McGuire is concerned about connectivity.

The high speed rail is a tremendous thing for this region. My concern that I was voicing was that from the time that we started TBARTA, we went on a tour. Went out to Denver, to Charlotte, North Carolina, to Dallas, and we said, what is the secret to a good rail system? And they said number one it has to be on time, it has to be clean and it has to be safe. And then they said and then it has to go somewhere. And when you get there you have to be able to go somewhere else.

Tampa Mayor Pam Iorio is in support of the ballot referendum. She’s concerned that if the referendum doesn’t pass, that the plans will have to be reworked.

Once we get this referendum going and once the voters approve of it in November, they can be assured that it’s part of a larger regional plan that’s in place. And that’s not always been the case in the past. In the past it’s always been everyone kind of doing their own thing, but not anymore . We now work together.

Well in other communities where they’ve had referendums that haven’t passed the first time, what the community leadership has done is gone back and looked at why that referendum didn’t pass, made some adjustments to the plan and put it back on again as a referendum. The fact is we need a better transit and road system in Hillsborough county, and we’ve got to come to terms with that one way or another. So we’re putting the best plan forward that we have to date and hopefully the voters will accept it.

Iorio says the transportation plans would then have to be made more appealing to voters.

If for some reason the voters don’t accept it, then we go back to the drawing board, we figure out what the voters would like to accept and then put that back before them. Because this issue will never go away. This issue is far too important to the future of our community. Just to say, well, the road network that we have today is the road network of the future and just that’s the way it’s going to be, that’s just not an acceptable way to think about our future.

Laura Badertcher is a student at University of South Florida. She takes a class on transit, which Mayor Iorio is teaching. Badertcher says she learned much from attending the TBARTA board meeting.

I think it’s safe to say that none of us really have much of an information base when it comes to transit, especially in Tampa, since we don’t have a really good transit system. So we’ve all basically learned how it’s set up, how the planning process is going, what the future plans are, and basically the implementation process for the future. I’m actually not quite sure how much longer I’ll be in Tampa, but it’s a really important issue. So if I am here for a long time, I will definitely, definitely participate. I can spread the word right now.

Hillsborough County Commission plans to have the language settled on the ballot referendum by March 17th. The next TBARTA board meeting will be March 26th at the Florida Department of Transportation office in Tampa.