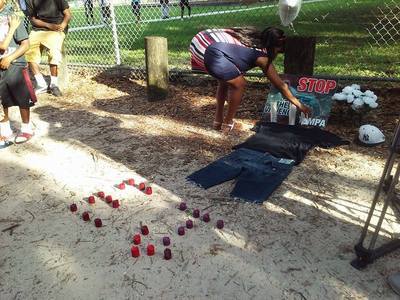 On Monday, family and friends of a 14-year-old victim of a drive-by shooting in Tampa held a vigil. Edward Harris is of the city’s latest victims of gun violence.

A black shirt and denim shorts were laid on the ground. Flowers and white balloons fluttered in the breeze. Lit candles were used to spell out “EJ”, Edward Harris’ nickname, as the people gathered to pray and remember a boy who is gone too soon.

Harris is the 18th homicide victim in Tampa this year. According to police, there has been a recent increase in gun-related deaths and crimes.

And as gun violence in Tampa rises, Tammie Straughter, Harris’ aunt, pleads for answers and asks for the community’s help.

“The violence has got to stop. There’s too many kids being killed. Somebody need to step up. They say it takes a village to raise a kid. Okay, well, this village – we need to step up! Come on!”

The police found the silver sedan involved in the drive-by shooting Monday evening. Authorities believe that the car would be the key to making an arrest.

The motive behind the shooting is still unclear.