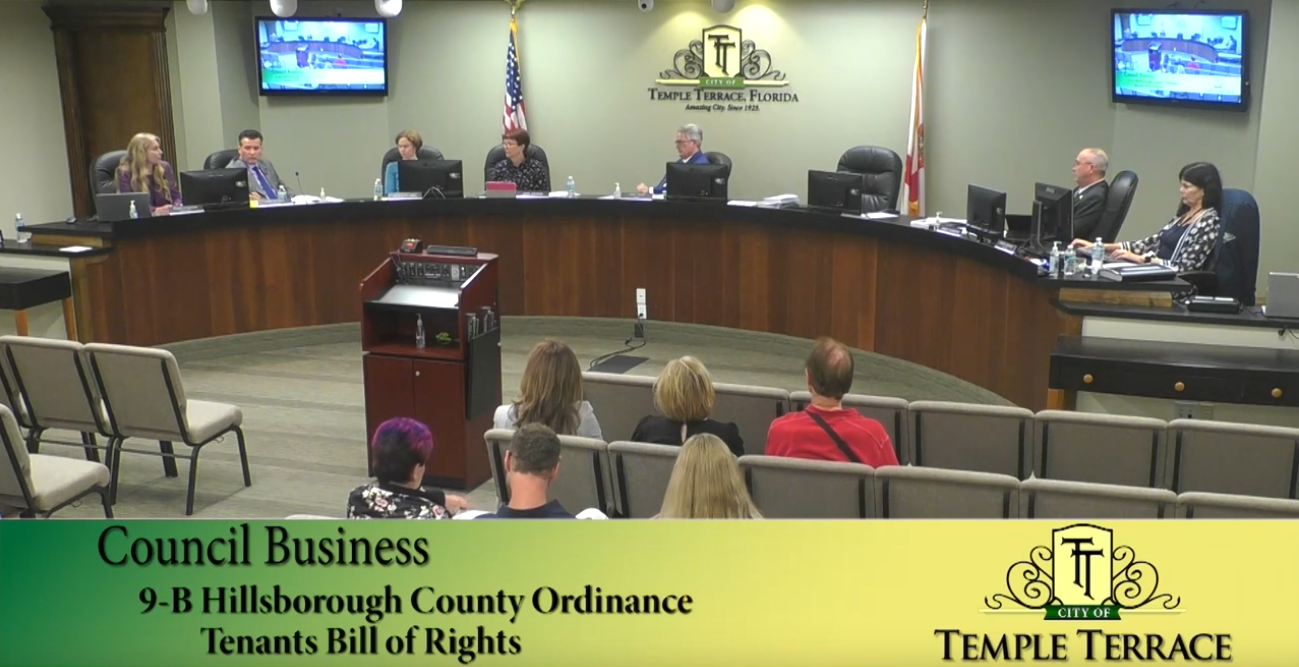 Because the ordinance currently only applies to unincorporated Hillsborough County, it does not apply to residents of Temple Terrace, a small, incorporated city adjacent to Tampa that has a population of about 27,000.

But that could be changing soon.

City Council in Temple Terrace voted unanimously on Nov. 15 to write a letter to Hillsborough County to ask that the county apply their ordinance to Temple Terrace, and to enforce its requirements.

“We’ve seen these high rate hikes where people’s rents are going up…$800 or 350 a month, and it’s sudden,” said Meredith Abel, a member of Temple Terrace City Council. “And you don’t have time to pivot, or adjust, and there’s not enough housing inventory to find something else.”

The Hillsborough County ordinance, first enacted in 2021 and enhanced in August, doesn’t allow for caps on rent increases, which is generally preempted by state law.

Similar ordinances have also been passed in St. Petersburg, Tampa, and most recently Pinellas County, among other municipalities across the state.

The Hillsborough County ordinance also requires landlords to provide tenants a copy of their rights, and prohibits landlords from discriminating against renters based on their lawful source of income. For instance, refusing to rent to someone who uses a government housing voucher — such as Housing Choice (Section 8) or Veterans Affairs Supportive Housing (VASH) to help cover the cost of housing.

Refusing to rent to someone with a voucher is an issue seen nationwide that can limit affordable housing options for voucher recipients — the majority of whom in Hillsborough County are people of color, classified as “very low income,” and spend an average of 43 months on a waitlist just to get a voucher, according to the U.S. Department of Housing and Urban Development (HUD).

Violations of Hillsborough County’s ordinance, which prohibits source of income discrimination, is punishable by a fine of $500 for a first offense and any subsequent offenses.

Andy Ross, Mayor of Temple Terrace, said for most local landlords, following the requirements of the ordinance shouldn’t be a big deal.

“By and large, the vast majority of landlords are fine, upstanding people who largely are already adhering to what this would require,” said Mayor Ross. “Who is not doing this are the corporate companies, Wall Street corporations who are coming into Hillsborough County — all over Florida, all over the country really — and buying up the rental housing market by the tens of thousands of units.”

Still, not everyone was supportive of the changes in Temple Terrace. Prior to the meeting, the Florida Apartment Association, a lobbying group for landlords, issued a warning of the upcoming vote in Temple Terrace, as it has done for separate votes on housing-related issues in other Florida municipalities.

Several critics of the Tenant’s Bill of Rights, including a council member-elect, rallied in opposition to the county’s ordinance at the Nov. 15 meeting, arguing that extending it to Temple Terrace was an example of government overreach.

“We have our own governance, and in years past we have decided not to have Hillsborough County have governance over our citizens in many ways,” said Alison Fernandez, a former city council member and council member-elect, during public comment. “I really have strong concerns about Hillsborough County exhibiting governance and enforcement over our citizens and our property owners in our city.”

This prompted city council members to gently remind the public that it was city leaders who went to the county about including Temple Terrace in the county ordinance, not the other way around. While the city considered drafting up their own Tenant’s Bill of Rights ordinance earlier this year, they ultimately decided to opt into the county’s instead, largely because that would leave it up to the county — not the city, with its limited resources — to investigate tenant complaints.

“We don’t have the staff to enforce it,” Mayor Ross said bluntly. “We have three code enforcement officers.”

“I think it’s, you know, it’s one thing for Tampa to say it needs its own,” added council member Cheri Donahue, later on in the meeting. “They have their own enforcement. We don’t.”

Small landlord Eric Kravitz told council that the ordinance would impose a “bureaucratic burden” on Temple Terrace landlords like himself. He said, after doing a check out of curiosity, it would cost him an extra $10 a month to print notice requirements, as mandated under the ordinance. “So that would be another cost, or another thing that I would have to do,” said Kravitz.

Others who showed up in opposition said council should delay or postpone the vote — as realtor groups recently prompted county leaders in Osceola County to do — so city leaders could read up more on the ordinance and its potential consequences.

That insinuation, however, didn’t sit well with the mayor and members of council. “I don’t want anybody going away thinking that your elected officials don’t read anything, or don’t do any homework,” said Mayor Ross. “You think I would vote on something like this without doing my homework? I don’t do that.”

But, this talking point isn’t new. Landlords have also mobilized against similar tenant protections in Tampa and St. Petersburg, echoing similar concerns of “unintended consequences” and unfair burden on landlords.

“I think there’s a lot of vagueness and other possible unintended consequences that could come about as a result of the ordinance in particular,” Eric Garduño, a lobbyist for the Bay Area Apartment Association who often frequents city and council meetings, told St. Petersburg City Council of Pinellas County’s ordinance last week.

Housing activists in St. Pete say it’s the influence of realtor and landlord groups that prompted St. Pete to opt out of Pinellas County’s recently enacted Tenant’s Bill of Rights, which is stronger than the city’s.

All in all, the process for plugging Temple Terrace into Hillsborough County’s Tenant’s Bill of Rights could take several weeks.  Laurie Hayes, the city’s marketing and communications officer, confirmed by email that the city sent a letter to the county on Nov. 21 to request they amend their ordinance to include Temple Terrace.

According to Hayes, the county has yet to approve the request. But, she said the city unofficially confirmed the county’s approval of their request prior to the Nov. 15 vote, so they expect the county will be on-board in an official capacity.

Included in the city’s request is a 90-day lead-in period, which is meant to allow property owners time to be informed of the changes before provisions of the ordinance are enforced. Hillsborough County has resources on its website to educate both landlords and tenants covered by the ordinance.