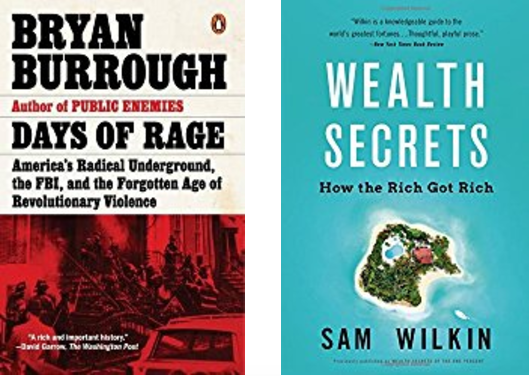 The names may seem almost quaint now, when not forgotten altogether. But there was a time in America, during the 1970s, when bombings by domestic underground groups were a daily occurrence. The FBI combated these and other groups as nodes in a single revolutionary underground, dedicated to the violent overthrow of the American government.

Forty years later, talk of terrorism in America conjures up a vastly different threat. The juxtaposition of terrorism then and now is why Bryan Burrough’s Days Of Rage: America’s Radical Underground, The FBI, And The Forgotten Age Of Revolutionary Violence is such a compelling and timely read. Bryan Burrough joins Life Elsewhere to remind us of a time of native-born radicals, most of them “nice middle-class kids,” smuggling bombs into skyscrapers and detonating them inside the Pentagon and the U.S. Capitol, at a Boston courthouse and a Wall Street restaurant packed with lunchtime diners.

Our second interview is with Sam Wilkin, author of Wealth Secrets: How The Rich Got Rich. One surprising conclusion Wilkin arrives at is the relatively small number of people throughout history who have become staggeringly wealthy, despite superficial differences, their methods to amass their fortunes, they all have a great deal in common. To explain, Sam goes back in time and unravels the wealth secrets of Ancient Romans, where the disparity between the very rich and the very poor is startlingly like our world today. Discussing wealth or the lack of it is a sobering topic, thankfully, Sam Wilkin imparts artful humor into his writing and the interview.

Make sure you do not miss the next edition of Life Elsewhere and two timely interviews with Bryan Burrough and Sam Wilkin.