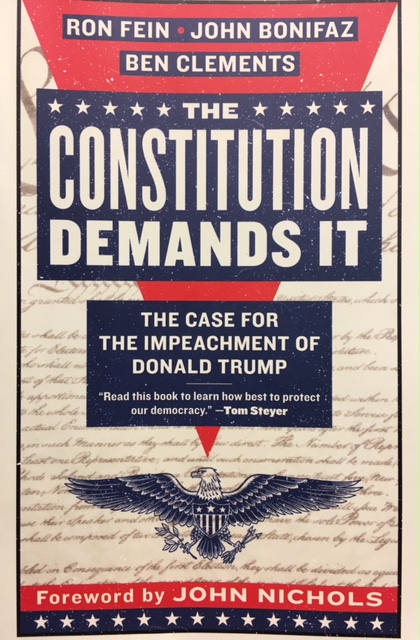 Coming up today—the case for impeachment of Donald Trump. And later WMNF is offering free air time for candidates.
Good morning, welcome to Radioactivity. I’m Robert Lorei….
Even before the latest revelations about alleged racism and alleged connections to Russian organized crime figures by authors Omarosa Manigault Newman and Craig Unger—there is a long track record of questionable behavior by President Trump while in office. Some of it includes his business dealings, profiting from Presidential stays at his resorts, favorable treatment by foreign governments and working with Russians during the election campaign.

The historical background for impeachment and the details of why President Trump should be impeached is the topic of the book THE CONSTITUTION DEMANDS IT: THE CASE FOR THE IMPEACHMENT OF DONALD TRUMP (Melville House). The book was co-written by our guest- Ron Fein.
Ron Fein is the legal director of Free Speech For People (https://freespeechforpeople.org/), a national nonpartisan, nonprofit organization that engages in legal advocacy to confront the misuse of the US Constitution.

As a public service—WMNF 88.5FM is offering free air time for political candidates. We’re giving up to two minutes of free air time for a message recorded by the candidates themselves. The message may include anything the candidate would like to say about why they should be elected to office. You may also include contact information. This offer is open to any candidate (regardless of party) who is running statewide or locally and who is on the ballot on August 28th in Hillsborough, Pinellas, Sarasota, Pasco, Polk and Manatee Counties. Candidates may record their messages right now at 813-238-8001 x115. We’ll be playing the messages back during the 11AM hour during the next two weeks. Any message over the two minute limit will be edited to reduce the length. Again the place to record a candidate’s message is 813-238-8001 x115. All messages must be recorded by 9AM ET on August 21st.