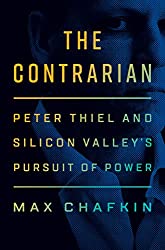 What do you know about the billionaire venture capitalist and entrepreneur, Peter Thiel? He has been a behind-the-scenes operator, influencing countless aspects of our contemporary way of life, from the technologies we use every day to the delicate power balance between Silicon Valley, Wall Street, and Washington. Yet despite Thiel’s power and ubiquity, no public figure is quite so mysterious – until now. In The Contrarian – Peter Thiel and Silicon Valley’s Pursuit of Power, the first major biography of Thiel, Max Chafkin traces the trajectory of the innovator’s singular life and worldview, from his upbringing as the child of immigrant parents and years at Stanford as a burgeoning conservative thought leader to his founding of PayPal and Palantir, early investment in Facebook and SpaceX, and relationships with fellow tech titans Mark Zuckerberg, Elon Musk, and Eric Schmidt. The Contrarian illuminates the extent to which Thiel has sought to export his values to the corridors of power beyond Silicon Valley, including funding the lawsuit that destroyed the blog Gawker and strenuously backing far-right political candidates, notably Donald Trump for president in 2016. Max Chafkin joins Norman B to discuss The Contrarian.

When we have questions about the news headlines we call Dr. Binoy Kampmark for his scholarly insight.

1. What does the recent German election mean for the rest of the world?

4. The new James Bond movie with Daniel Craig – are we desperate to relive a time that never really existed?

5. Russia threatens to ban Youtube after it shuts pro-Kremlin channels?

As always, Binoy unfalteringly tackles each question with expert knowledge and a soupçon of wit. Dr. Binoy Kampmark is a Senior Lecturer in the School of Global, Urban and Social Studies at RMIT University, Melbourne, Australia.

Also in the show, new piano music from Brighton-based, Poppy Ackroyd. Pause is her fourth, full-length album. A collection of ten solo piano works written during the pandemic and shortly after the birth of her first child, the title refers to the feeling of normal life being temporarily put on hold. Poppy says, “For previous albums, almost as much of the creative process was spent editing and manipulating recordings as it was composing at the piano, however after having my son, I struggled to spend time sitting in front of a computer. The only thing I wanted to do while he was still small, if I wasn’t with him, was to play the piano. In fact, much of the album was written with him asleep on me in a sling as I used any quiet moment to compose. It made sense that this should be a solo piano album, it was important to me that every track on the album could be entirely performed with just two hands on the piano.”