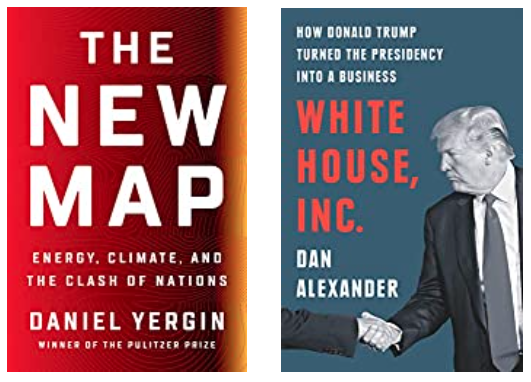 Daniel Yergin – The New Map: Energy, Climate, And The Clash Of Nations

Pulitzer Prize-winning author and global energy expert, Daniels Yergen offers a revelatory new account of how energy revolutions, climate battles, and geopolitics are mapping our future. The world is being shaken by the collision of energy, climate change, and the clashing power of nations in a time of global crisis. The “shale revolution” in oil and gas–made possible by fracking technology, but not without controversy–has transformed the American economy, ending the “era of shortage”, but introducing a turbulent new era. Almost overnight, the United States has become the world’s number one energy powerhouse–and, during the coronavirus crisis, brokered a tense truce between Russia and Saudi Arabia. Yet concern about energy’s role in climate change is challenging our economy and way of life, accelerating a second energy revolution in the search for a low carbon future. All of this has been made starker and urgent by the coronavirus pandemic and the economic Dark Age that it has wrought. The chessboard of world politics has been upended. A new cold war is emerging with China; and rivalries grow more dangerous with Russia, which is pivoting east toward Beijing. Vladimir Putin and China’s Xi Jinping are converging both on energy and on challenging American leadership, as China projects its power and influence in all directions. The South China Sea, claimed by China and the world’s most critical trade route, could become the arena where the United States and China collide directly. The map of the Middle East, which was laid down after World War I, is being challenged by jihadists, revolutionary Iran, ethnic and religious clashes, and restive populations. But the region has also been shocked by the two recent oil price collapses–one from the rise of shale, the other the coronavirus–and by the very question of oil’s future in the rest of this century.

Dan Alexander is a senior editor at Forbes, where he leads the magazine’s coverage of Donald Trump. His news-making exposé that details President Trump’s efforts to make money off of politics, taking us inside his exclusive clubs, luxury hotels, overseas partnerships, commercial properties, and personal mansions. Alexander tracks hundreds of millions of dollars flowing freely between big businesses and President Trump. He explains, in plain language, how Trump tried to translate power into profit, from the 2016 campaign to the ramp-up to the 2020 campaign. Alexander explains, just because you turn the presidency into a business doesn’t necessarily mean you turn it into a good business. After Trump won the White House, profits plunged at certain properties, like the Doral golf resort in Miami. But the presidency also opened up new opportunities. Trump’s commercial and residential property portfolio morphed into a one-of-a-kind marketplace, through which anyone, anywhere, could pay the president of the United States. Hundreds of customers—including foreign governments, big businesses, and individual investors—obliged. The president’s disregard for norms sparked a trickle-down ethics crisis with no precedent in modern American history. Trump-appointed an inner circle of centimillionaires and billionaires—including Ivanka Trump, Jared Kushner, Wilbur Ross, and Carl Icahn—who came with their own conflict-ridden portfolios. Following the president’s lead, they trampled barriers meant to separate their financial holdings from their government roles. Dan Alexander has written a page-turning, hair-raising investigation into Trump and his team, who corrupted the U.S. presidency and managed to avoid accountability. Until Now.