Home WMNF News The Tragedy Of Slenderman. A Petition For Climate Protection 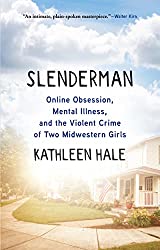 Environmental journalist, Robert Hunziker, a frequent contributor to Life Elsewhere shares his opinion on why temperatures across Europe are reaching record highs; why people in Seattle where home air-conditioning is unusual are suffering from extreme heat; how can Florida, already swelteringly hot half of the year, have a heat index that is the highest it has ever been? Robert in his characteristically unflappable mode explains and asks that you read and sign the Petition for Climate Protection and Restoration Initiative.On May 31, 2014, in the Milwaukee suburb of Waukesha, Wisconsin, two twelve-year-old girls attempted to stab their classmate to death. Morgan Geyser and Anissa Weier’s violence was extreme, but what seemed even more frightening was that they committed their crime under the influence of a figure born by the internet: the so-called “Slenderman.” Yet the even more urgent aspect of the story, that the children involved suffered from undiagnosed mental illnesses, often went overlooked in coverage of the case.

Kathleen Hale’s Slenderman: Online Obsession, Mental Illness, and the Violent Crime of Two Midwestern Girls tells that full story for the first time in deeply researched detail, using court transcripts, police reports, individual reporting, and exclusive interviews. Morgan and Anissa were bound together by their shared love of geeky television shows and animals, and their discovery of the user-uploaded scary stories on the Creepypasta website could have been nothing more than a brief phase. But Morgan was suffering from early-onset childhood schizophrenia. She believed that she had been seeing Slenderman for many years, and the only way to stop him from killing her family was to bring him a sacrifice: Morgan’s best friend Payton “Bella” Leutner, whom Morgan and Anissa planned to stab to death on the night of Morgan’s twelfth birthday. Bella survived the attack but was deeply traumatized, while Morgan and Anissa were immediately remanded into jail, and the severity of their crime meant that they would be prosecuted as adults. There, as Morgan continued to suffer from worsening mental illness after being denied antipsychotics, her life became more and more surreal.