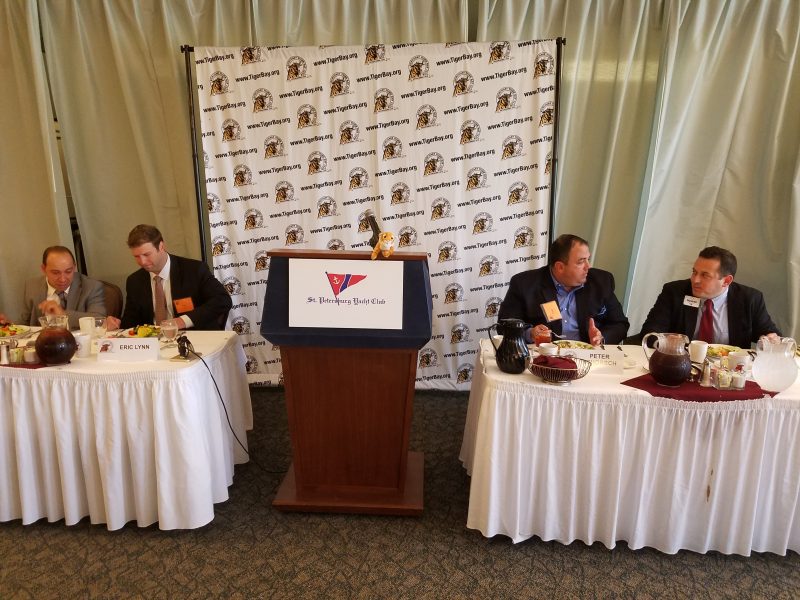 There are two Democrats and one Republican running for the Florida House seat being vacated by St. Petersburg Democrat Dwight Dudley; WMNF spoke with all three of them Wednesday morning about whether they agree with the call from Democrats in the Legislature to hold a special session on gun control.

Democrat Eric Lynn originally was running for a Pinellas County Congressional seat but switched to the Florida House race rather than face Charlie Crist in the primary when Dudley announced he would not run for reelection.

“Well, first let me say that I am a supporter of gun control. I believe that we need to pass laws, here in Florida, to ensure that guns do not get into the wrong hands.

“Here, in Florida, we still have gun show sales and internet sales for people, without background checks. There’s ways that we can fix that. A special session is one way to start. And I, for one, believe that the way that you chip away at a problem is by starting with one step at a time, not by people saying we can’t fix anything because the whole problem is too big to fix. Let’s work on it, the way that I did when I was working in Washington, in President Obama’s administration: one step at a time.”

“Well, I support their efforts. I mean, I think after what has happened in Orlando and after what continues to happen, time and time again, we can’t just sit on our hands and continue to do nothing.

“I think we need to pass sensible gun reform legislation in this state. And as you may know, my wife and I have a 3 1/2-year old. Nothing is more important to us than the safety of our family and I feel like everybody feels that way.

“It’s time to act, it’s time to stop talking about it. I am very frustrated by the ‘politics as usual’ on this issue. It’s time to do something.”

Joseph “JB” Bensmihen is the Republican running for the Florida House seat. He’ll face the winner of the August Democratic primary between Lynn and Diamond.

“I think we have to respect the 2nd Amendment and I think we have to–it’s there, we have it, we have to figure out a way to make sure that everyone is happy. In other words, when the President says that he doesn’t criticize other groups for other issues, like when something happens and he says that a terror attack is one isolated terrorist, my response to that is when something happens that deals with gun control, we don’t say it was one person because of the devastation.

“So, I am sensitive to the fact that when people get hurt because someone has a gun and should not have had one, that is a very serious issue, but, we have to be strong and understand that if you play with the 2nd Amendment, then one day you might play with the 4th Amendment and I just wouldn’t want to do that.”

So, to follow up on what you were saying, are you playing with the 2nd Amendment if you say that there are certain people who shouldn’t have guns?

“No, certain people should not have guns. And anyone who thinks that certain people should have guns, needs to get their head examined. It’s not open to everyone. Not everyone should be driving. I mean, if you’re a diabetic and you’re prone to not being able to stay awake or your blood sugar spikes out of control and you black out, you might have a right to have a driver’s license but, no one in their right mind should give you a driver’s license. So, every American has the right to have a gun, but, that right becomes an entitlement. Making sure that you’re able to actually carry–it’s like any other license, make sure that you’re able to carry the license and therefore you should be able to use it.”

During the forum, all three agreed that it should be considered a “moral failure” that the state Legislature has not expanded Medicaid.

All three candidates said they support the Medical Marijuana amendment on this November’s ballot.

The moderator, Florida Politics’ Peter Schorsch, called this “the battleground seat in the Florida Legislature” because of how many times it’s changed hands in recent years.

Here are two videos of just the “lightning round” at the end of the forum:

Here’s the interview with Eric Lynn:

Here is full video from the forum in three parts: