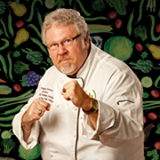 Today Radioactivity looks at an innovative way to fight obesity among youth and later explores a new film PAY TO PLAY that’s getting rave reviews for exposing the grim reality behind today’s campaign finance system.

Rob Lorei speaks to Chef Tony Geraci about his work in public schools. First in Baltimore (where he was hired after students walked to the School Board with their lunches and asked the Board members to taste them) and now in Memphis, Chef Tony has transformed cafeteria menus in two major American cities: sourcing fresh, healthy foods from local farmers (and even using city land to start new, student run farms), creating menus with students – including themed days like ‘Farm Fresh Fridays’ and ‘Try Something New Tuesdays,’ and expanding participation in school meals programs by adding breakfast and supper programs. And he’s done all of this for less money than the districts had been paying to buy processed foods from national providers

Earlier in the program Rob interviews, John Wellington Ennis, a Los Angeles-based filmmaker whose films explore political corruption with a heavy dose of comedy and satire, is bringing his new film “PAY 2 PLAY” to Stetson University College of Law on Sept. 20 at 7:30 p.m.

Ennis will discuss the impact of campaign finance reform at an event coordinated by Stetson Law professor Ciara Torres-Spelliscy. The event is free and open to the public. Seating is limited.