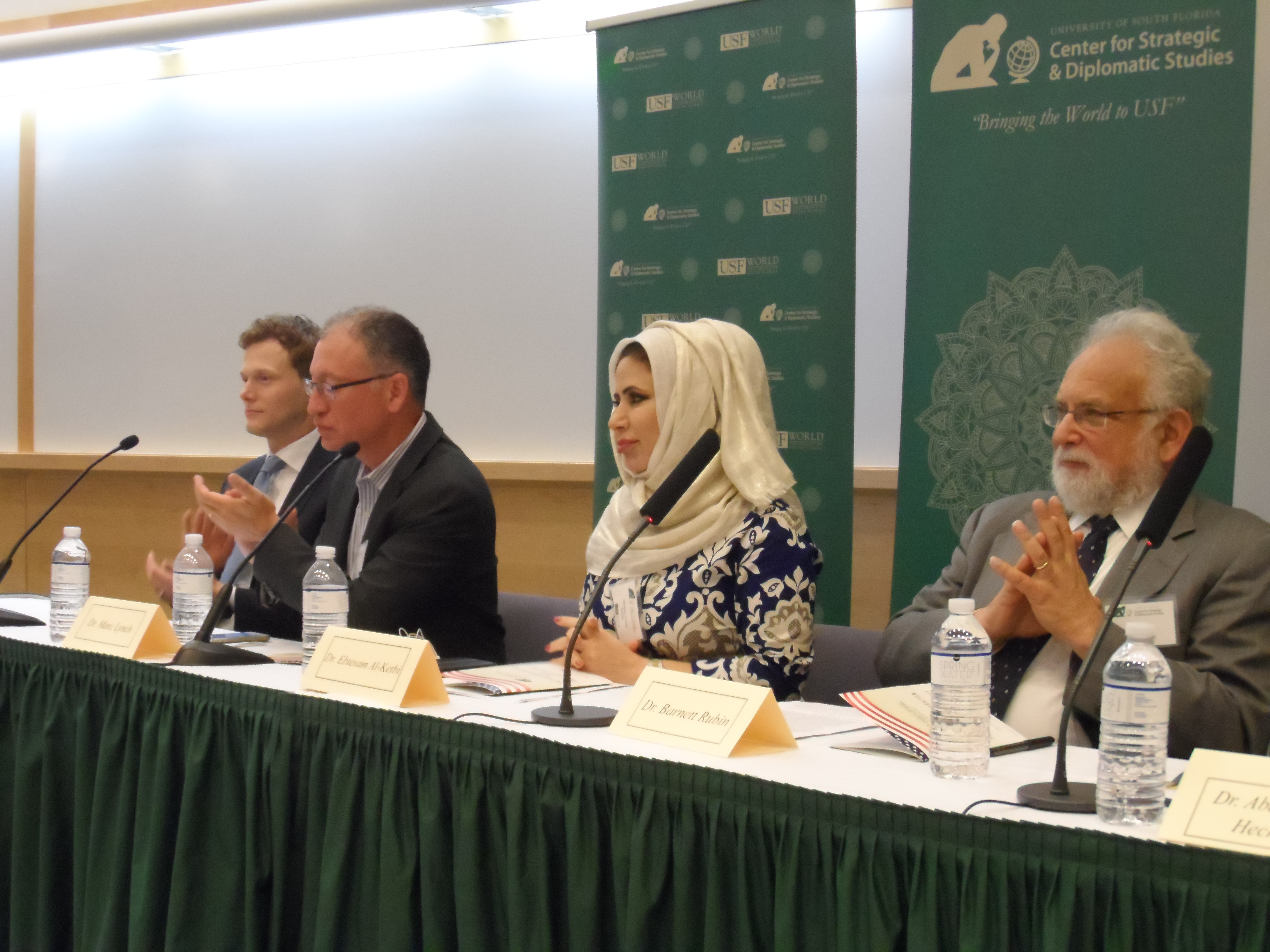 Depending on which foreign policy expert you ask, President Trump is either carrying out essentially a continuation of decades of U.S. policy overseas or he represents a new and dangerous wildcard; both points of view were represented by panelists Thursday in a conference at the University of South Florida in Tampa on “The Trump administration and its foreign policy challenges.”

Marc Lynch, a professor of political science at George Washington University says that so far, Trump’s actions have been more mainstream than his campaign rhetoric.

“I think that one of the most interesting things that we’ve seen, over the last few months, has been that Trump has largely abandoned almost everything he said he was going to do and has instead– he has basically adopted a highly conventional foreign policy, which is staffed by conventional types of foreign policy personnel and has largely banished the non-traditional people who populated his campaign. This is a work in progress, but, as my friend Dan Drezner said in the Washington Post today, basically Donald Trump fought the foreign policy blob and the blob won.

“Now, this doesn’t mean that this will never change. As Matt said, the team is still in formation. Many of the worst members of the early administration have been forced out; there’s still some there who would like to do things very very differently. McMaster can’t stand them and so, presumably they’ll be gone, but, we don’t know that.

“What many fear is if there is a major terrorist attack in the United States, that this will unleash the worst instincts of the administration. The things that they were not able to do initially, they will suddenly find themselves able to do. This is a legitimate concern, because I think the instincts and the political logic of it is very clear and its something that I and others are following and looking at quite carefully.

“But, I would conclude by simply saying that despite our very real fears based on campaign rhetoric and personnel, almost none of it has actually materialized. What Trump has ended up doing has been, to this point at least, pursuing essentially Obama’s policy on almost all of these issues and I think that that’s a good thing.”

But Barnett Rubin, associate director at the Center on International Cooperation of New York University, thinks Trump’s policies are a radical departure from past administrations.

“Second Syrian strike sending a clear message? Can you tell me what the clear message was? I don’t know. No one knows. Is the message that ‘if they do it again, we will strike again and we’re willing to escalate indefinitely?’ We don’t know. No one knows what the message was except that President Trump reserves the right to use military force when he sees something on television that upsets him.

“In the past week, according to Max Boot at the Council on Foreign Relations, who was a former security and policy advisor to Senator McCain and not by any stretch of the imagination a liberal, in the past week Trump has changed his position on NATO, the Export-Import Bank, Syria, Russia, China, taxes and Janet Yellen. Now, in most of those cases, he has changed it in the right direction, so that’s good, but, unreliability and unpredictability in the President of the United States is extremely dangerous and it creates the types of miscalculations, on the part of foreign leaders, out of which wars are made.

“Now, as far as the appointments are concerned, there has never been such a delay in staffing the State Department. There is no confirmed position below the Secretary. I worked in the State Department. I have many friends there. The State Department is paralyzed and personally, I suspect that this is not an accident, it is part of a plan for destroying American diplomacy, because he doesn’t believe in it. And his adviser Steve Bannon says that he wants to destroy parts of the American government. That I consider very very dangerous, because suppose he does have a message from the Syrian strikes? How will he follow it up to get it implemented? He will need diplomats and he does not have them there.”

The conference is hosted by the USF World Center for Strategic & Diplomatic Studies.

Here are videos in 9 parts from this segment of the conference: