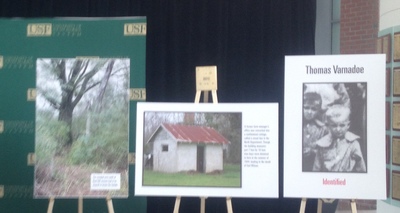 On Thursday, researchers at the University of South Florida identified two more victims from the site of the former Arthur G. Dozier School for Boys in Marianna, Florida.

One body belonged to Thomas Varnadoe, who was taken to the Dozier school in September 1934. A month later the 13-year-old was dead, reportedly after succumbing to pneumonia. USF researchers said were not able to establish the final cause of Thomas’ death due to the condition of his remains.

Thomas’ nephew, Glen, has long been a crusader for former inmates of the Dozier school.

“I’m overwhelmed that we’ve achieved the goal that we initially set… in removing him from a place of atrocity-laden soils at the now-defunct Arthur G. Dozier School for Boys,” the Lakeland resident told reporters. “It gives me pleasure and spiritual relief that Thomas will not spend eternity in the demeaning surroundings, but with his brothers and family members who have never forgotten him.”

According to court documents, he was killed in 1944 by four other inmates while they were confined to a small cottage. Medical evidence shows that Wilson died from head trauma.

Researchers at USF have yet to identify 52 other bodies exhumed from the site of the former reform school.