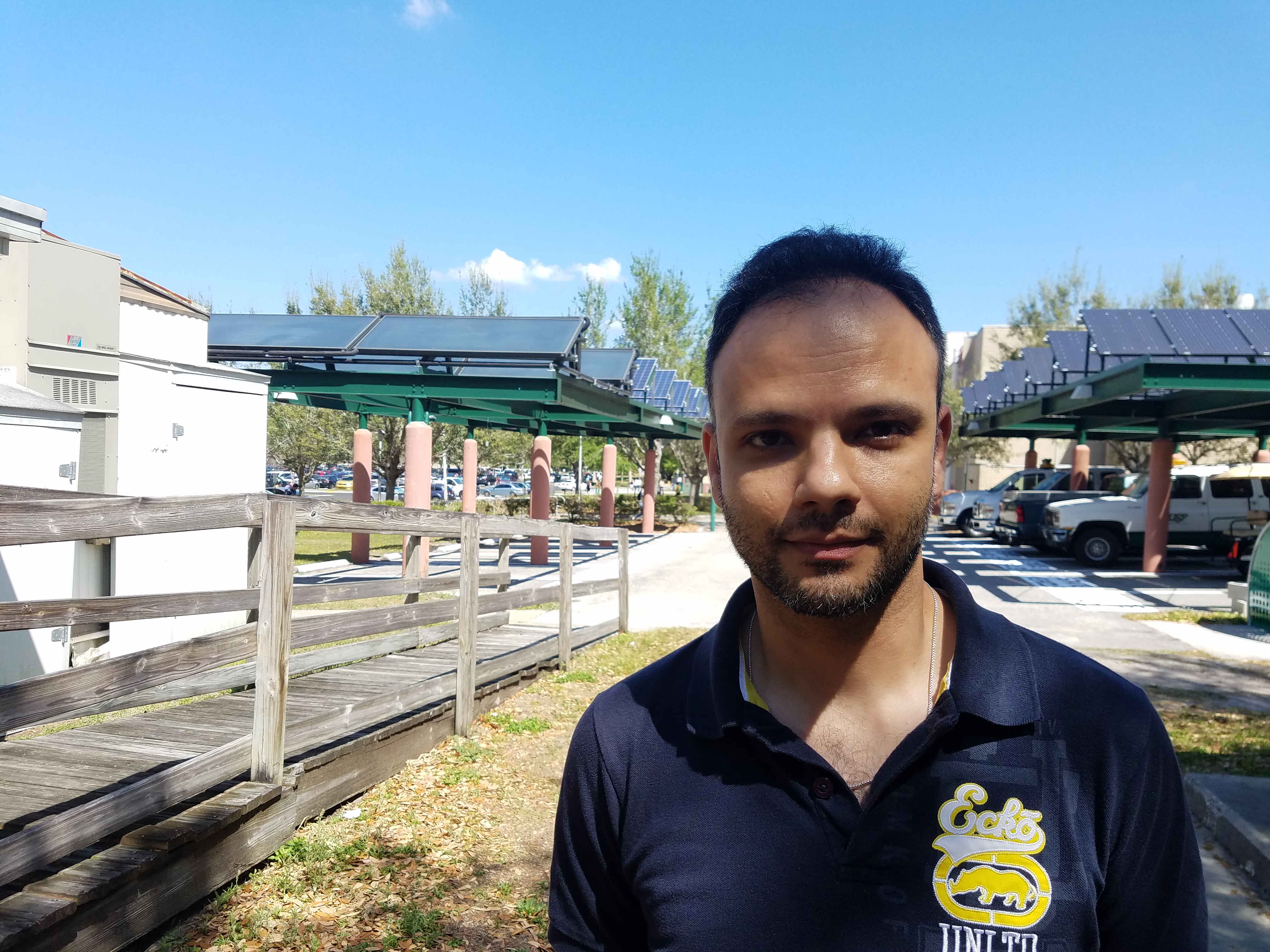 The USF student who was stuck in Iran because of President Trump’s travel bans has returned to Tampa; in January Mehdi Zeyghami had been granted a visa to come back to the United States, but it was revoked the same week after Trump issued his first ban on travel from seven Muslim-majority countries, including Iran.

That ban was overturned by courts and a second travel ban is also in legal limbo, so Zeyghami was able to secure another visa and finally return to Tampa Monday night.

Zeyghami is a graduate student in the mechanical engineering department at USF and WMNF News interviewed him Tuesday afternoon near some of the solar panels he has used for research.

“After the first travel ban was stopped by the court ruling and my Visa was refused, I got another Visa application, interview and everything. I start from scratch. I went through the new Visa interview and I waited for, I think, one month or so and during [the] past few days there were people contacting me and helping me contacting the US Embassy and asking for expedite[d] processing for me and I think that worked.”

And you had to go to different countries. Do you want to say about that adventure?

“Oh, yeah. Like, you know there is no US Embassy in Iran and countries around Iran that has US Embassies have limited number of slots open for Iranians to go there and do the Visa interview for all kind of Visas for immigrant or non-immigrant. Every time that we want to get the Visa, we need to just go and grab the closest one. This time I couldn’t reserve or schedule an appointment in Armenia and I went to Cypress. Yeah, I reserved an interview date there and went to Cypress through Turkey. I first come into Turkey and then to Cypress and I did my interview and yeah, that’s it.”

And you had to live outside of Iran for a while?

“That’s the thing. I wanted to be close to the embassy to just– whenever my processing was finished, just drop my passport and get the Visa, because, this was a thing that happened to me when the first travel ban was enforced, my Visa was approved, but, because I was in Iran and it would take 2-3 days to reserve a flight and fly to Armenia to get the Visa. In this short timeline, my approved Visa was refused. I didn’t want to go through the same experience and I stayed with some relatives in Turkey for a while.”

And then you got the Visa through Cypress. When you were able to get the Visa, then you made flights home. What were the flights like? Did you have any trouble getting into the US?

“No. Not actually. There was no problems or anything. There was a normal checking in because I just went through the Customs checking in. It took maybe 5-6 minutes, just talking [about] ‘where do you study?’ or something like that. It was normal procedure and I entered. It was like the last time that I entered 4 or 5 years ago.”

The travel bans. How have they made your life more difficult and what do you hope happens with them?

“How it made my life… You know, if everything was normal, I was granted or my Visa was approved at the beginning of this semester. I lost at least 2 or 3 months of my time here. My graduation is postponed at least one or two semesters and I was, I don’t know, financially under pressure, because I need to again, travel and make Visa interviews, go and pick it up. Everything was doubled for me. The main stressful thing was that there was an expectation that there will be another ban or something and I could go through the same thing again.”