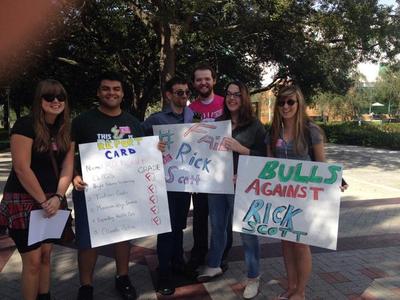 TAMPA – It’s two weeks until Election Day and some University of South Florida students are rallying against Governor Rick Scott. On Tuesday, a small gathering at the Tampa campus gave Scott a failing grade on education and women’s rights.

Alison Strand is a campus Democrat who helped organize the rally.

The women’s studies major currently has about $14,000 in student debt. Strand estimated that number will climb to $20,000 by the time she graduates. She is also concerned about how changes to the Bright Futures scholarship program will impact other students.

“[Governor Rick Scott] cut Bright Futures by about half… We are now losing about 50,000 students who aren’t getting Bright Futures. Students who worked really hard in high school to get a high GPA, who studied hours and hours to get good ACT [and] SAT scores… they are now unable to get the Bright Futures [scholarship] like they were promised [in] their freshman year of high school.”

Megan Milanese is a public health student, who said she is voting for Florida’s future.

“Rick Scott is not good for Florida on a variety of issues,” said the 25-year-old. “Women’s issues is just the issue that’s most personal for me. Yeah… don’t vote for that guy.”

When Milanese graduates in May, she plans to work with victims of sexual violence.

“I want to stay in Florida because I think there’s a lot of work to do here…in some ways because of the policies enacted both under Rick Scott and other Republican governors.” said the graduate student. “There is a lot of work to do, primarily for health because it’s not valued.”

In the nearby Marshall Student Center, many students were more focused on their mid-term exams than the mid-term elections. Candace Lawrence is a civil engineering student who said she’s still making up her mind about the election.

“I’m following it a little bit… not closely,” said the 20-year-old. “I’m thinking about voting independent…I don’t have time to continuously follow [the election].”