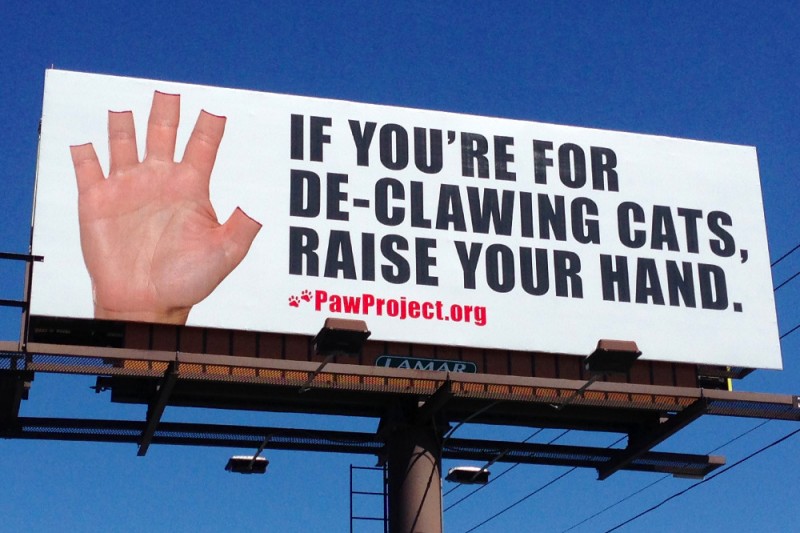 Dr. Jennifer Conrad—a veterinarian, founder of The Paw Project, and a tireless crusader against declawing cats for many years; I first interviewed her about it on “Talking Animals” in 2005, and she’d already been working on the issue for some time—recounts in a “Talking Animals” interview this week the initial impetus for taking on the cause, spurred by performing reparative surgery on declawed big cats at a wildlife sanctuary.

This experience, Conrad recalls, led to her first legislative triumph, in 2003, helping impose a declaw ban in West Hollywood, CA. We review that one of the most insidious facets of the declaw procedure is that it sounds like an innocuous manicure, but it actually involves amputation: the cat’s toes are amputated at the first knuckle. Conrad says that the procedure is still performed as widely as it because most cat owners do not understand what happens, and the veterinarian in question is unlikely to say “I’d like to de-knuckle your cat.”

She notes fewer and fewer veterinarians perform declaw surgery (as more and more human clients are seeking truly humane vets; The Paw Project website provides a directory of North American vets who do not perform the surgery), and sprawling veterinary hospital chains like Banfield and VCA now refuse, as a matter of policy, to conduct declawing procedures.  Conrad outlines some of the recent legislative victories and inroads, including that Pittsburgh banned declawing, Massachusetts has an anti-declaw bill approved by committee, an anti-declaw bill passed committee in Nevada, an anti-declaw bill was introduced in Pennsylvania.

She points out that while animal welfare organizations–among them: such major, national entities as the Humane Society of the United States—are typically quite supportive of these legislative developments, the ASPCA is an outlier in that they don’t back this sort of anti-declaw lawmaking; as an example, Conrad cites ASPCA’s resistance when the state of New York was developing its declaw ban in 2019. She fields a wonderful call from a listener who “inherited” a declawed cat that she figures is 5-6 years old, had clearly grown quite attached to the animal, and asked Conrad what she should be on the lookout for—in terms of paws, behavior, and so on—as the cat ages.