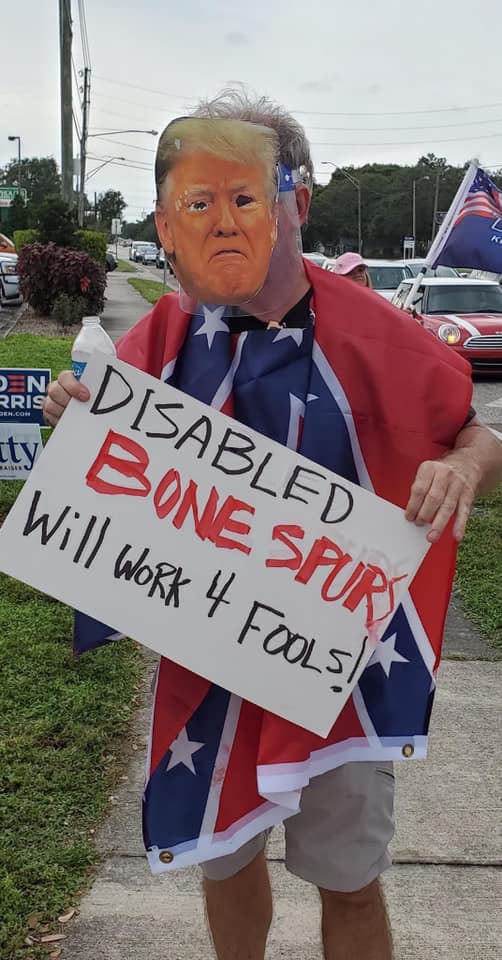 Here’s the video. Below is the description posted by the Facebook user:

“Copied from original post”
“This guy got arrested for absolutely no reason. It’s obvious that Pinellas’s finest are biased. What an absolute nightmare today was. This man was standing at the corner and a Trumper tried to engage him. We took the original picture. The Trumpers kept running to the police. The police jumped the guy from behind. It was horrible. He was not a young man. Definitely, not warranted at all.”
“The man was standing next to someone with a Trump flag and people were taking pictures. the guy said “get away from me”, within 1 second the police grabbed him and he was on the ground with 2 police officers on top of him. One police officer repeatedly punched and elbowed the man.
“Numerous Trump supporters tried to jump in the way of people recording, waving their flags in front of them so they wouldn’t be able to record what was going on.
“After it happened, the Trump supporters started cheering and getting in everybodys faces. The woman who took this video was chased by two women who were pointing their flagpoles at her and calling her names. Other police officers were informed about this behavior and just told people to get in line because there were lots of complaints.
“** and before anybody comes with “he was resisting”, IDGAF. He did nothing wrong to be arrested in the first place, and that is still no excuse for the officers actions*”