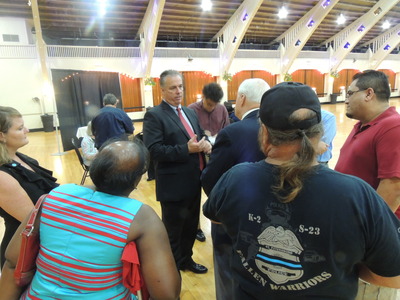 There’s about to be a new chief in town. The city of St. Pete is expected to choose a new head of its police department sometime within the next few weeks. Citizens had the chance to interview the four finalists for the job during a meet and greet Thursday night.

Of the short list, only one candidate is from the St. Petersburg Police Department. That’s Assistant Chief Melanie Bevan.

Bevan has been with the agency for 27 years and has a long list of educational accomplishments including a Doctor of Education in Organizational Leadership and a graduate of the FBI’s National Academy. During a two-hour open house at the Coliseum, Bevan fielded questions from residents about her vision for the department. Among her priorities are increasing efficiencies within the department and communication with the community.

“…the use of technology and when I say technology, I’m not talking about some far-reaching idea. I’m talking about things such as smart phones and tablets and social media. Social media is being used across the world today – quite a bit by criminals, somewhat by police departments, but we need to meet that and harness these ideas and technology and applications to our benefit.”

Hundreds of St. Pete residents, including a bunch of current and former cops, made the rounds questioning candidates. In Thaddeus Reddish’s corner a couple of women asked the New Haven, Connecticut Assistant Police Chief, why St. Pete? He said because it’s a new challenge and called the area, a city divided.

“I come from a community-based policing background. That’s what I know and that’s what I would bring here. I would have the officers get to know everyone and be part of the city. We don’t just serve the city as an occupying force. We’re the police working for you as the citizens to protect and serve you – we also need to get to know you.”

Another woman stressed the need for more community support for the police department. She asked Reddish if he supported employing officers who live within the neighborhoods they work.

“That would have to fall within the council and under the Mayor’s office … I would support an initiative.”

Community policing was a hot topic among residents throughout the evening. Jerry Geier is the Chief of Police in Goodyear, Arizona. He does have some Florida ties. He used to be the head of Florida’s Division of Alcoholic Beverages and Tobacco and was a bureau chief for the Oceola County Sheriff’s Office.

“We’ve got to have a huge community policing aspect here. In fact, even taking it to a larger level than it is not and that’s what I’ve done in my previous agencies. But, to really impact crime, there’s going to be some hard hitting occasionally and where we have those spikes and trends and those real crime problems, we need to go in there and hit that stuff hard. So, it’s sort of a combination, best picture of both worlds.”

Another plus some residents saw in Geier was his experience in emergency management with Florida-specific problems.

“…huge hurricanes that came right across Oceola County in the Kissimmee area over the period of a couple months where, virtually, 75% of the homes and structures in the county were damaged and from a host agency stand point and being the commander in charge of all that operation, you better be prepared and you better have resources that come in and help you and you better know what’s going on or you’ll be in a mess.”

The fourth finalist for St. Pete PD’s top spot is also no stranger to dealing with disasters. Terrence Pierce is a certified trainer with FEMA’s Emergency Management Institute. He’s the director of criminal investigations at an agency in Maryland. He weighed in on questions from a group about the city’s homeless population.

The four candidates interviewed with a panel and St. Pete Mayor Rick Kriseman before the meet and greet. Kriseman is collecting input from the hiring group and the public, but ultimately the decision is his.

“I’ll read everybody’s feedback and see what they say and that’s all I can do is take it all in and try and get a feel for how these folks presented to the community.”

Kriseman said he expects to make a choice sometime in the first week of July. Interim Chief David DeKay is not in the running for the job. Video of all four candidates is on our website, wmnf.org/news.