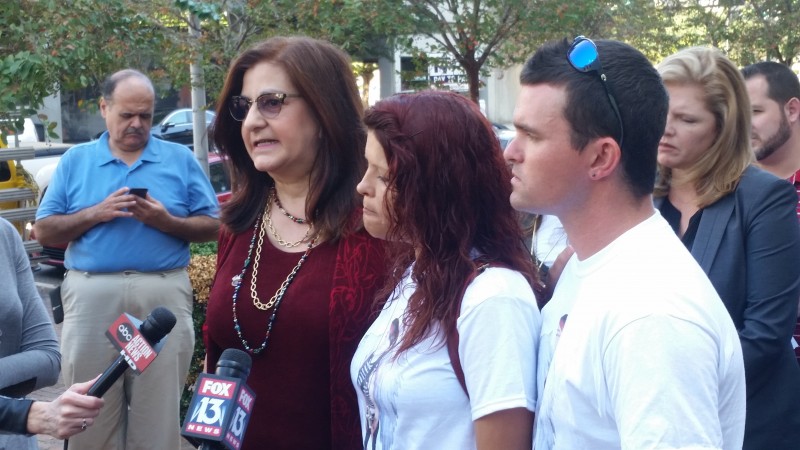 A new coalition is trying to make Tampa safer for pedestrians and cyclists; in a press conference Thursday afternoon, Tampa City Council member Lisa Montelione said there have been 43 deaths so far this year in Hillsborough County. On December 3, she’s introducing a resolution to city council called Vision Zero, which pushes for a holistic approach to road safety.

“Vision Zero is a way to embrace in as much a public relations aspect to spread the message that we’re not going to tolerate this. And that we’re going to do everything possible, engineering-wise, to change our roads, gathering as many people together into the movement as possible.”

Montelione compares road safety to the education movements for recycling and seat belts: teach the kids at school about it and they’ll let their parents and friends know why it’s important.

It was easy to convince Valerie Jones to join the push for safer roads. Her daughter Alexis Miranda was killed walking to Chamberlain High School on Busch Boulevard earlier this month.

“She was dropped off that morning like she was every morning. But this morning she crossed the street and was struck by a vehicle that was using the turning lane as a passing lane and going rather fast. So we lost my daughter that day. I was looking for a positive outlet because that’s the way I like to do things and I just felt like the pain needed to subside and I needed to find a way that her death wasn’t in vain. And I did some research and found Walk Bike Tampa. Their Vision Zero seems like a good plan. And I’m hoping something positive comes out of this because I know my daughter and she’s watching down and she wants people to slow down. She wants people to use the crosswalks. She wouldn’t want her death to be in vain.”

A new coalition is trying to make Tampa safer for pedestrians and cyclists. Walk Bike Tampa hosted a press conference this afternoon, its executive director is Hannah Strom.

Tampa City Council member Montelione says roads near high schools are not considered school zones by the Florida Department of Transportation manual that determines how roadway elements like crosswalks and speed limits are designed.

“If we were to change the manual to include high schools as well as the elementary and the middle schools that are already there, we could implement more safety strategies around high schools. And I think it only makes sense because you have young drivers.”

Montelione says revisions to the technical manual will be coming out soon but FDOT has denied her requests to see the draft.