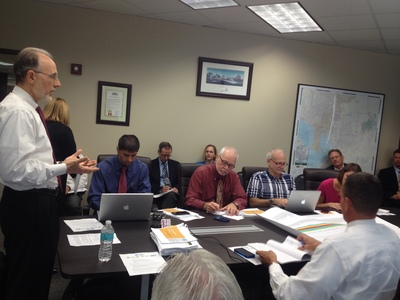 A transit policy group wants Hillsborough County residents to be able to vote again on a tax for transportation improvements as soon as 2016.

Tuesday the Policy Leadership Group announced its proposal to connect USF, downtown Tampa, Westshore and Brandon. It wants to aid commuters with bus rapid transit and circulator systems, widening and repaving roads, improving intersections and eventually implementing a rail system. County Administrator Mike Merrill is part of the team that spent over a year forming the proposal.

“We’re talking about changing the entire system here, because the existing system isn’t going to get us there. We need to look at this from a holistic integrated system of moving people. It’s about the people, it’s not about the technology, it’s about the customers. How do you get them from one point to where they want to go, reliably, cost effectively, every time? That’s what makes successful transit.”

The proposal would cost from $7.4 to $10 billion , so the group wants residents to vote on a one cent sales tax in a 2016 referendum. Merrill says that is expected to create $6.1 billion over 30 years. Since that’s not enough, Hillsborough County would have to acquire additional grants and funding.

“We’re at a place where in order to pull this off we really need an additional revenue source. Pinellas is looking at a penny sales tax. While there are a number of other revenues that can be used to help fund us, there are not nearly enough to pull of a major transit and non transit proposal.”

The proposal will not move forward until the Policy Leadership group receives feedback from the public.

“The next very, very important step is to take this out to the community; the voters, the residents. They can then see all of our suggested projects. They can challenge us; they can say ‘hey you missed this…maybe this should be done differently.’ A robust, rigorous, professional community out reach, so that everybody who has an opinion, businesses, individuals, any stakeholders, can look at us and give us their feedback.”

If transit tax passes, officials hope to connect their new transit system with surrounding counties, and possibly connecting to Orlando.

On August 12, the Policy Leadership Group will review its plans at a public meeting and will make revisions to the proposal by the end of October.