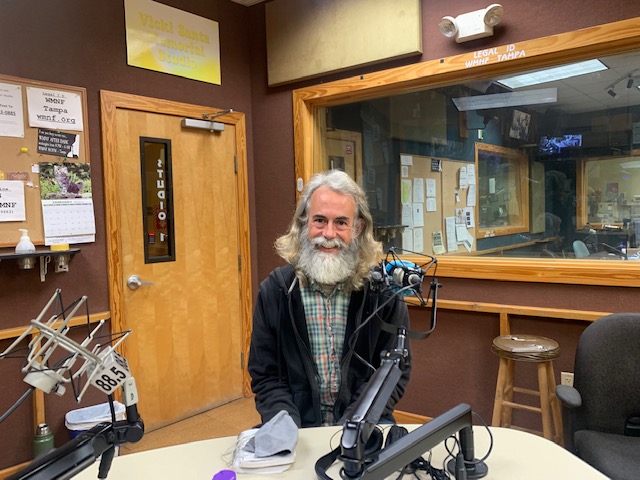 Urban farmer Travis Malloy has been a fixture in the Tampa Bay area’s local food movement for nearly a decade. He’s the co-founder of Meacham Farm, a two-acre plot of seasonal fruits and vegetables on the edge of downtown Tampa. Nine years ago Malloy also founded TrailBale, an 18-acre family farm in Temple Terrace that raises chickens, pigs and Thanksgiving turkeys.

Travis was the featured guest on the first episode of WaveMakers, a new weekly show on WMNF hosted by Janet and Tom Scherberger.

At the heart of Malloy’s efforts is not just a love of the work, but a passion for the community as a whole.

“We farm for the environment, for food independence, for healthy local food, for animal welfare, for worker welfare and for community connections,” it reads on the TrailBale website. “We farm because we love it.”

Malloy originally studied electrical engineering and spent nearly two decades working for the aerospace industry. But after early retirement, he discovered his passion for urban farming. According to his biography on the Meacham Urban Farm website, he started small “with 20% vision and 80% determination”.

Since then, he has taken up farming full-time with his family, founded the Temple Terrace Farmers Market, and was named the 2017 Citizen of the Year Award in Temple Terrace.

You can listen to the full interview in the WaveMaker archives.