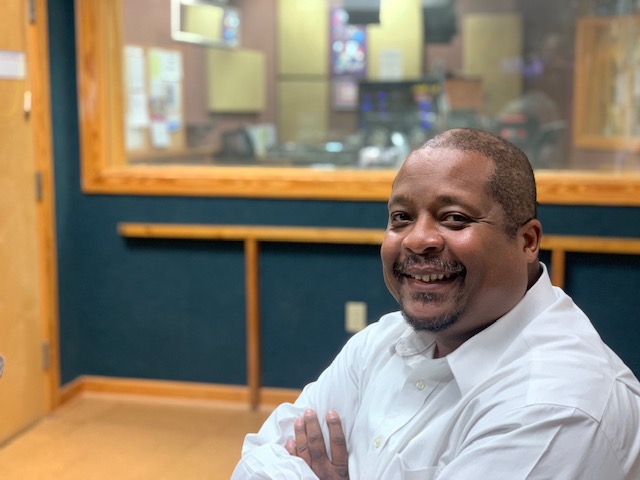 Florida Humanities executive director Nashid Madyun drove Isaac Hayes’s gold-plated Cadillac into the Stax Museum of American Soul Music in Memphis and presided over the largest collection of African American history and culture in the Southeast as director of the Black Archives Research Center and Museum at FAMU.

Madyun shared stories about his two-decade long career and some of his favorite music by Stax recording artists on Sept. 29 during a special WaveMakers edition of MidPoint, where we go deep with someone who’s making a difference in the Tampa Bay region. You can listen to the entire interview here, below, or by searching for WMNF MidPoint on Apple Podcasts or your favorite podcast platform.

Nashid Madyun, who has a master’s degree in Creative Writing, said that skill came into play as he put together exhibits in museums throughout the country.

“You need to find a way to tell that story to everybody with one message.” he said. “That panel along the wall …needs to tell an accurate story, an objective story” that finds a balance between academic writing and general story telling and communicates clearly to everyone from a class of six-graders to a grandmother with her toddler and a subject matter expert.

At the Stax Museum, where Madyun was the founding director, display panels tell the story of a recording studio that was home to Booker T and the M.G.s, the nation’s first integrated rock band, during a time of racial strife.

“They came together, black and white and produced music that ended up influencing the Beatles and the Rolling Stones and Bob Dylan,” Madyun said. “That is incredible, considering just two miles north you have the assassination of Martin Luther King at the Lorraine Motel. And Memphis, of course, right at the edge of Mississippi and Arkansas was a hot bed of KKK communities and demonstrations. So to have that kind of peace and integration occur at a music studio on the south side of Memphis is incredible. And they produced some wonderful music that competed with the Philly soul sound and Motown.”

At the Black archives at FAMU, exhibits tell difficult stories of Jim Crow and the KKK. Doing that, he said, requires creating an arc that starts with the broad national or regional story, putting the difficult truth at the climix, and then finding a way to release the pain.

“You talk about Jim Crow and KKK you need to also  talk about the rise of African Americans and how they overcome that,” he said. “The Civil Rights Movement —  you  understand the water hoses and sitting in the back of the bus but now you have remarkable individuals who found a way  to galvanize community thought and action and make way for a new generation. You tell the hard part but you find away to allow that patron to leave fed.”

As the new executive director of Florida Humanities, Madyun said he looks forward to facilitating diverse stories and community dialogues throughout the state.

“Imagine being in a workplace that lacks diversity. You think it lacks diversity until you have a conversation about the confluence of religion, the confluence of values and perceptions,” he said. “Unless you have that dialogue, or you’re comfortable having that dialogue, you won’t know that your neighbor could be your friend. We can’t be afraid to learn. I’m not saying agree. I’m not saying or absorb  or accept someone’s diverse of different opinion. But understanding the perspective of your neighbor allows you to be a good citizen and participate in what we call the social contract in our democracy.”