Home Blog News and Public Affairs What is the Green New Deal? 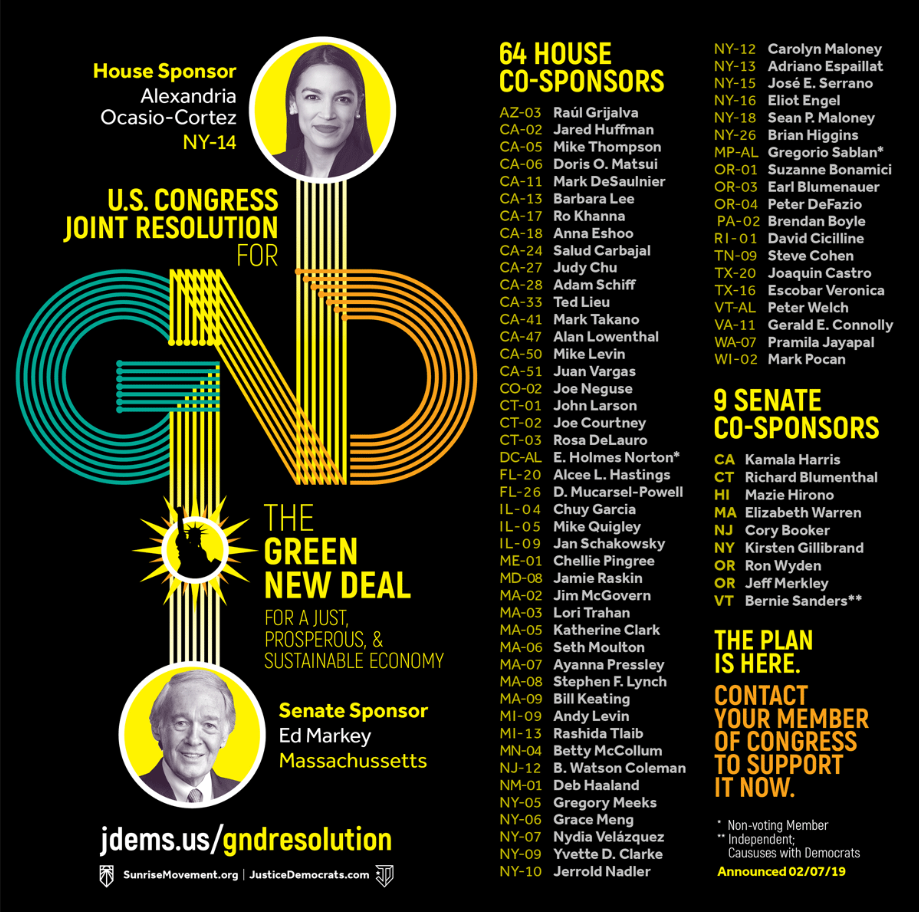 The Green New Deal is the Progressive Green Dream. What exactly does it address?

(1) to create millions of good, high-wage jobs in the United States;
(2) to provide unprecedented levels of prosperity and economic security for all people of the United States; and
(3) to counteract systemic injustices

While few would argue with the worthiness of the goals, the way they are achieved is already getting a reaction in DC.  These components will be addressed as a ten year national mobilization, with the elements of addressing climate change harnessed to also address income inequality, health care, transportation, and other progressive issues. It’s authors and sponsors liken it to the original New Deal, framing climate crisis and income inequality as issues deeply damaging to the US and the world.

The original New Deal, instituted in 1933 by Franklin Roosevelt, was a massive undertaking aimed at bring jobs, money, and savings back to ordinary Americans. It morphed and changed over the rest of the decade, and many of its programs underpin modern society (Social Security, Glass-Steagall Act, Tennessee Valley Authority, unemployment insurance, and more).

The Green New Deal Resolution outlines a host of current and potential disasters caused by climate change and certain economic policies, and has dire predictions about the health and well being of the planet and nation if the current level of action (or non-action, according to the authors) is maintained.

The non-binding joint resolution does not have specific funding, tax breaks, or other information in it. Its purpose seems to be to set the guiding principles of the Green New Deal. Much of the language, and support, has grown out of the Sunrise movement, an environmental movement energized by young activists.

More from the AP:

WASHINGTON (AP) — Democrats including Rep. Alexandria Ocasio-Cortez of New York are calling for a Green New Deal intended to transform the U.S. economy to combat climate change and create thousands of jobs in renewable energy.

The freshman lawmaker is teaming up with veteran Sen. Ed Markey of Massachusetts on the plan, which aims to eliminate the U.S. carbon footprint by 2030.

Markey predicted more Democrats would sign on and said even some Republicans may back the plan.

“This is now a voting issue across the country,” he said. “The green generation has risen up and they are saying they want this issue solved” as one of the top two or three issues in the 2020 election, Markey said.

As outlined Thursday, the nonbinding resolution sets a goal to meet “100 percent of the power demand in the United States through clean, renewable and zero-emission energy sources,” including dramatic increases in wind and solar power.

While setting lofty goals, the plan does not explicitly call for eliminating the use of fossil fuels such as oil and natural gas, a nod to pragmatism that may disappoint some of Ocasio-Cortez’s strongest supporters.

The Democrats are likely to meet resistance to their proposal in Congress, especially in the Republican-controlled Senate. Trump, who has expressed doubts about climate change, also is likely to oppose it.

The announcement of the Green New Deal came as House Speaker Nancy Pelosi tapped eight Democrats to serve on a special committee to address climate change. Ocasio-Cortez was not among those named to the panel, which is chaired by Rep. Kathy Castor, D-Fla. Ocasio- Cortez said Pelosi invited her to join the panel but she declined, saying she wants to focus on the Green New Deal and other committee assignments.

Pelosi said Thursday she hadn’t seen the Green New Deal proposal but welcomes “the enthusiasm” of its backers.

“I welcome the Green New Deal and any other proposals” to address climate change, Pelosi said. She said she also wants to hear from the new climate committee, which she said will “spearhead Democrats’ work” on climate issues.

The resolution being introduced Thursday marks the first time Ocasio-Cortez and other lawmakers have attached legislative language to the Green New Deal, a concept that until now has been largely undefined other than as a call for urgent action to head off catastrophic climate change and create jobs.

Ocasio-Cortez said in a statement that the plan will create “unprecedented levels of prosperity and wealth for all while ensuring economic and environmental justice and security.” She calls for a “World War II-scale mobilization” that includes high-quality education and health care, clean air and water and safe, affordable housing.

Answering critics who call the plan unrealistic, Ocasio-Cortez says that when President John F. Kennedy wanted to go to the moon by the end of the 1960s, “people said it was impossible.” She also cites Franklin D. Roosevelt’s New Deal, Lyndon B. Johnson’s Great Society and the interstate highway system begun under Dwight D. Eisenhower as examples of American know-how and capability.

While focusing on renewable energy, Ocasio-Cortez said the plan would include existing nuclear power plants but block new nuclear plants. Nuclear power does not emit greenhouse gases, which contribute to global warming.

The resolution does not include a price tag, but some Republicans predict it would cost in the trillions of dollars. They denounced the plan at House hearings on climate change on Wednesday.

“If anyone thinks that decarbonizing America is going to save the planet, they’re delusional,” said Rep David McKinley, R-W.Va.

The Green New Deal would be paid for “the same way we paid for the original New Deal, World War II, the bank bailouts, tax cuts for the rich and decades of war — with public money appropriated by Congress,” Ocasio-Cortez said.

Government can take an equity stake in Green New Deal projects “so the public gets a return on its investment,” she said.

“Now that this resolution is released, we’re taking the fight to districts across the country to build the political and public support for the Green New Deal, and get thousands of organizations signed on to back the resolution,” said Stephen O’Hanlon, spokesman for the Sunrise Movement, which has pushed for the Green New Deal and staged protests at the Capitol, including a sit-in at Pelosi’s office.