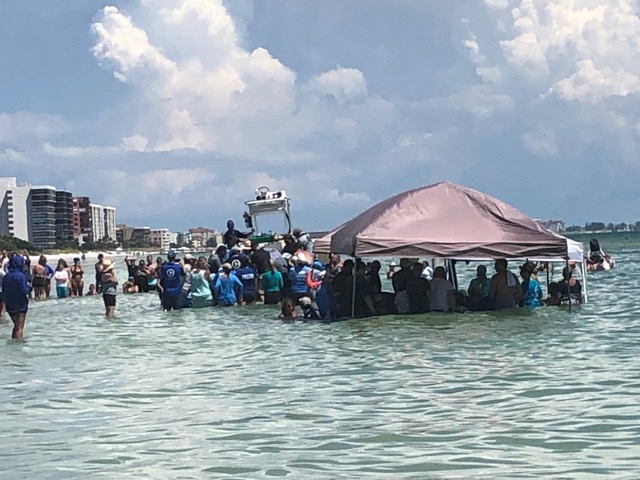 On Monday, five pilot whales became stranded in shallow water off Redington Beach in Pinellas County. After a day-long rescue effort, three of the whales were released back into deeper water and two were taken to a nearby rehabilitation facility.

In an email on Tuesday, a spokesperson for the Clearwater Marine Aquarium told WMNF that both of the whales in rehabilitation “are doing well and we expect a soon release.”

To find out what causes these mass strandings of whales, WMNF interviewed Darlene Ketten, a senior research scientist at Boston University and at Woods Hole Oceanographic Institute. Part of her research involves pathologies associated with whale strandings.

SK: What do we know about why pilot whales might strand?

“This is a very good question, and no simple answer. Whales, in general, strand. Just like there are for car accidents, lots of reasons. Pilot whales are particularly interesting because they have more of a tendency to mass strand. That means two or more animals stranding simultaneously, and in the same location as the other animals. So, sometimes you can have two animals. Sometimes you can have tens of animals. With pilot whales, they strand as a mass stranding, more often than most other species. Looking at Florida, it’s quite interesting thing that you got this stranding that just happened at Redington Beach. But, just a few weeks before, on July 17, there was another mass stranding of pilot whales off the coast of Georgia on St Simons Island. And, looking at the data, it looks like pilot whales have, starting around the year 2010, been stranding in Florida pretty much once a year, often at about this time of year. Up here in New England, we know that they tend to strand in the spring, and sometimes in the fall, as a mass stranding. And it’s usually females and calves that get caught in shore, and the tide shifts, and the sands shift, and they’re stuck. And when they call, they bring in more of the pod of the herd of whales. So there’s some pod behavior that’s particularly involved in mass strandings for pilot whales that may be going on in Florida these days, as well.”

SK: What could you speculate about this time of year about the summertime that would make it more likely in Florida?

“Well, I would direct you to NOAA Fisheries to answer part of that question, because they’ll have a much better handle on what’s happening in Florida than I do, working up here in New England. One possibility is that they’re following small prey, and they are getting themselves inshore, just like our animals in New England do. Or, another possibility is that, particularly with the rising inshore temperatures that we’re seeing with climate change, maybe something’s going on that prey is getting to be more scarce. And so, they are coming closer to shore, or hunting more frequently, and get more fatigued. It can be any number of things. An important part of this Redington Beach stranding, is that you have an excellent veterinary staff that’s looking into it. Two of the animals are being held for a while for observation, and they may get some answers from that. Another thing that can happen, also, with feeding, is there are various kinds of toxins that develop, particularly in warmer months in some of the prey species, and that goes all the way up through the food chain, and that can debilitate animals, too. So, it’s a puzzle that involves looking at the behavior of the animals, of their relative health, and then trying to put all of those. When they do go off shore and come back again, perhaps, what’s really driving them, is it weakness? Or is it animals calling for assistance that are bringing in more of the Pod? It’s a lot of components that have to be taken apart and looked at carefully.”

SK: What are your thoughts about the idea about sonar or other noise disruptions affecting whales?

“Certainly, sounds that humans make, not just sonar, but ship noise, a lot of different kinds of exploration devices, even fish finders, are all possible explanations for animals reacting, and perhaps, stranding. We know that happens with beaked whales. We don’t have any evidence of that for pilot whales. And, in fact, in various tests where they’ve used sonar like signals, the pilot whales are sometimes attracted to them rather than repelled by them. And, they certainly don’t strand as a result. It’s an important question for animal health, in general, including for fishes and invertebrates, whether it’s human made noise. This is my specialty. I’m not saying that because it is my specialty, but rather that it is something that is a critical issue. But, it is extremely unlikely in this case, unless there was evidence of some ships or activity in the immediate vicinity, could be even construction, that could disrupt the animal’s behavior. But, with pilot whales, we see them stranding more frequently than most species, as mass stranding. And we know from historical records that this has been going on for hundreds of years, well before there were sonars.”

SK: Is there anything else that people should know about pilot whales or about strandings?

“I think this current stranding is a great example of how the public can be involved helpfully. Whomever it was who reported the stranding straight-away to the stranding network did exactly the right thing. And then, volunteers came out and helped to save these whales. That’s been true for many of the Florida strandings. So, having the public involved. But, it is also hazardous to try to help these animals unless you have really expert guidance. So the first thing to do is to get NOAA Fisheries involved and people like Dr. Walsh in Florida, who was one of the responders, who can assess and give instructions to the volunteers. So, a community effort is a great idea, and it certainly is helpful to the animals. One thing to keep in mind is, sometimes these animals strand because they are very, very sick. And, you can’t save them. You have to take that into consideration, as well. So it’s not always the best thing to return an animal to the ocean where it may be suffering. But when you can, it’s a great opportunity to see how we interact with the marine world.”

Jaclyn Lopez, the Florida director of the Center for Biological Diversity, says:

“Historically, whales have stranded themselves due largely to disorientation. As you note, we don’t really always know what the cause is. In this case, no information has been released with the suspected cause. But disorientation could be due to navigation errors.

“So, for example in the Gulf of Mexico we have military activities going on in the northern Gulf of Mexico. We also have some oil and gas exploration. We have vessel traffic. Other causes of disorientation can include infection or illness.”

Here are more responses from the Clearwater Marine Aquarium to WMNF’s questions:

Were the five pilot whales all females or calves?

“Will not be confirmed until later today on the two in care. Do not know for the three released.”

Do you have thoughts on why the five stranded?

“Many possibilities but nothing confirmed. Sickness, underwater noise, loss of the social group leader are all possibilities.”

Do you know of any sound disturbances in the area, for example ship noises or sonar?

“We are not aware of any of this but we are always concerned about underwater sound levels. This can be a contributing factor to a cetacean stranding.”

Here’s a link to more WMNF stories about the environment.