Home Blog News and Public Affairs With Gasparilla canceled, Trumparilla, other events from GOP groups look to take its place 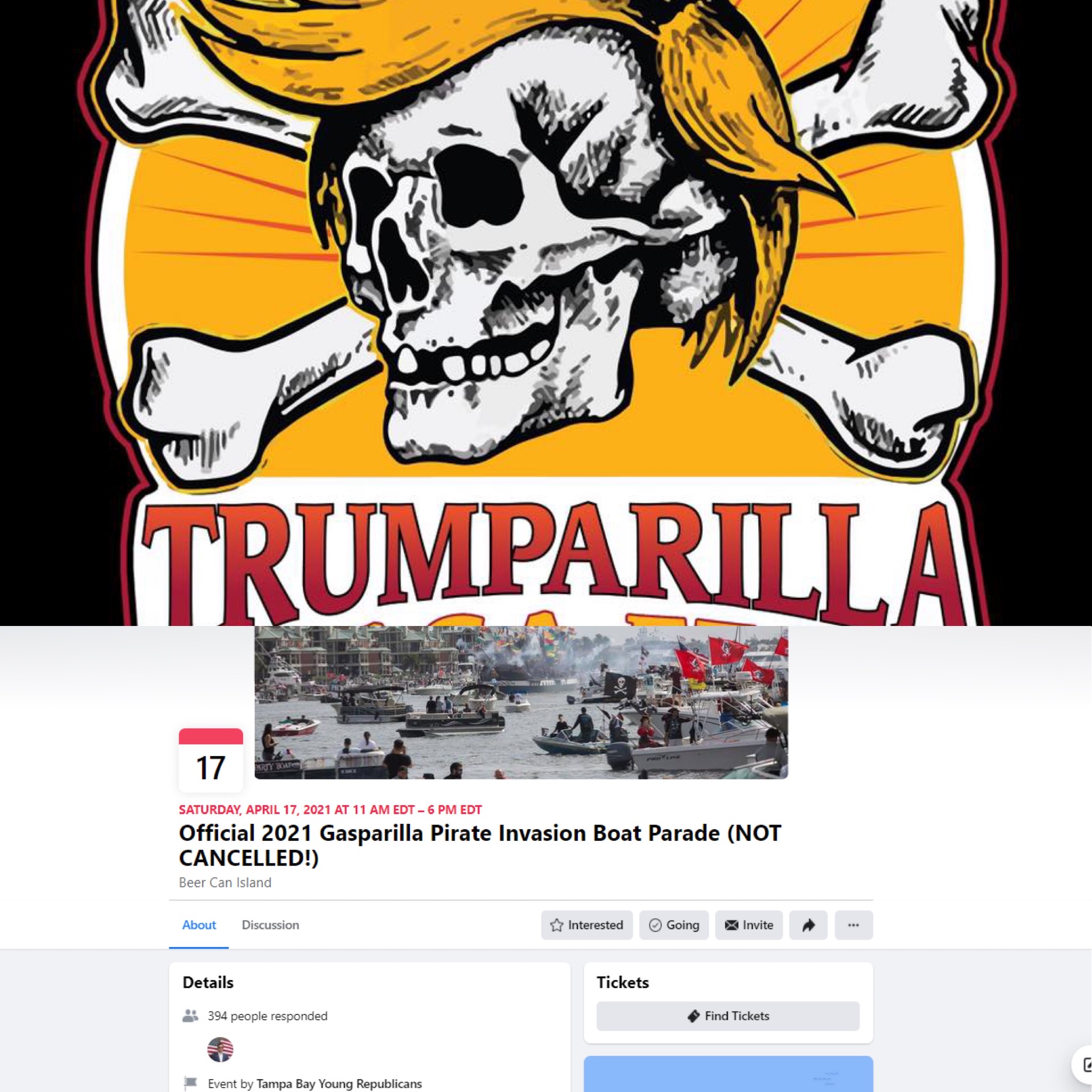 Gasparilla events might be canceled this year, but a group of Donald Trump supporters is planning a Trumparilla festival and boat parade. Other groups, including the Tampa Bay Young Republicans, are also planning boat parades for the same day Tampa’s annual pirate party was supposed to take place.

At Largo coffee shop Conservative Grounds you can get a massive, hand-sized apple fritter with your morning cup of joe. Or, if you are so inclined, a bumper sticker reading “F–k Biden and f–k you for voting for him” while you hang out in a replica Oval Office with a life-size Trump cutout.

And, in about two weeks, you’ll also be able to get all your Trumparilla flags, banners and shirts.

Gephart spoke with WMNF from last week’s Conservative Political Action Conference in Orlando. Gephart said Conservative Grounds isn’t the official organizer, but that’s where you can get all your swag. And he’s the one who created the Facebook event invite

All official Gasparilla events for 2021 were cancelled. The events, which include parades on land and sea, are joint ventures between the City of Tampa and Ye Mystic Krewe of Gasparilla.

The World Health Organization and CDC have said COVID-era precautions should remain as the country continues its quest for vaccinations. Nationwide positivity rates have dropped and health experts caution another spike could come if people let their guards down.

But Jake Hoffman, president of the Tampa Bay Young Republicans, said enough is enough with the public safety talk.

“At this point, we are fully ignoring the CDC,” Hoffman said. “As far as we’re concerned, the example we’re setting is you can open and you can operate like a normal society again.”

Hoffman and the Young Republicans have their own parade planned. As of Friday afternoon, their invite labels it as the “Official 2021 Gasparilla Pirate Invasion Boat Parade (NOT CANCELLED!).” The event said it’s not political in nature. But it’s taking place at the same time as the Trumparilla parade along the same route.

And Captain Lackman isn’t thrilled about their choice in name.

“The use of the Gasparilla name, marks or other intellectual property in relation to festivals; parades; or boat invasion is an infringement of existing copyright and direct violation of trademark law,” he said.

But the Bucs had a parade

Gephart said if the City of Tampa can have a parade for the Super Bowl, why can’t they. Tampa spokesperson Janelle McGregor said it’s not that simple.

“It was an all-hands-on-deck experience for the Super Bowl boat parade,” McGregor said. “We concluded a COVID-19 safety plan being submitted and approved all the way through the NFL in addition to the coordination of several law enforcement agencies.”

The annual Gasparilla festivities are also massive logistical coordination between the City and other local and state entities.

Since the parade is being held on the water, McGregor said the City can’t tell private citizens not to gather. Other events are planned, including a “Pirate Protest” that rebranded itself as a pub crawl. Again, McGregor said the city can’t preemptively stop them. It’d only be able to respond if there was a disturbance. She also said no permits have been filed for related events on that day, April 17. And if there were, COVID restrictions might get them denied anyhow.

Hoffman said he just wants people to be able to have a good time. He encourages people to come out to the parade and other events. He said he wants to shed light on some of the stigma surrounding the Grand Old Party.

“We are a very reasonable, moderate and fun group to be around,” he said. “Give the groups a chance. Actually come out and understand our point of view on a lot of different issues.”