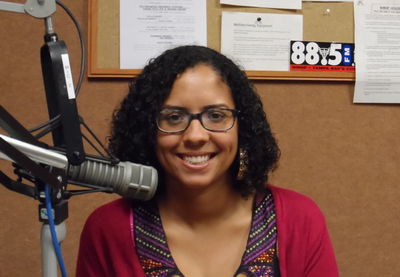 There are twelve presidential candidates on the Florida ballot, not counting write-ins. You know about the Democrat and the Republican and we’ve also brought you the voices of the presidential candidates from the Libertarian, Green, Constitution and Justice Parties. But there’s also a new political party called the Party for Socialism and Liberation.

Thursday I spoke with their presidential candidate, Peta Lindsay. She has been a community organizer with the Philadelphia Student Union and with the anti-war ANSWER Coalition.

“We are a nationwide party, a party primarily made up of activists and organizers. From our perspective real change doesn’t come from the politicians, real change comes from the people and the organized movement of masses of people. So we’re very concerned with building a struggle. We’ve been very active in many movements. As my bio talks about I was an anti-war organizer for many years, we played a leading role in the ANSWER coalition which stands for Act Now to Stop War and End Racism. I was a lead organizer in many of the major anti-war demonstrations that took place in Washington D.C. We actually started in 2001 but these giant demonstrations including the one of 500,000 people on January 18, 2003. We’re very active in the struggle for immigrant rights, in the struggle against racist police brutality, for women’s rights, for LGBT equality, so for a number of issues. We’re a party of very, very active people all over the country who are ultimately fighting for socialism, fighting for the things that working people need.”

What made you decide to run for president?

“Like I said we’re primarily a party of activists and organizers and we believe in building a movement, but when the elections come around it’s like the biggest propaganda apparatus in the history of the world, telling people to vote, vote, vote, like real change comes from the ballot box. Basically telling people to demobilize, to go back inside and wait for the politicians to do it for them. So during that time while we want to keep fighting for the things that working people want we can’t sit on the sidelines during the elections, we have to get in there too if that’s where all the media attention, all of the people are looking to, then we’re going to get into that race as well. So we got into this race with a 10-point program that we think speaks to the things that working people need. We’re talking about free education, free health care, affordable housing, we’re talking about making a job a constitutional right. We’re talking about ending the wars. We think that it’s one more way to fight for these things and to mobilize people and get them to the people who are struggling, get them to fight in their own communities for these things.”

In this election we’ve heard a lot about socialism. We hear people who are critical of President Obama say that he’s a socialist. What are your thoughts about what socialism means and how that applies to President Obama?

“Very simply for us socialism means, you know, this is an extraordinarily wealthy country and we believe that the wealth of this country was created by working people and we believe that wealth should go to providing the things that working people need. We’re talking about reorganizing society so that the rights of people, the needs of the people come first and profit isn’t a concern at all. Right now we have a society that’s entirely organized for profit, based on what’s profitable, what’s going to get greater and greater amounts of wealth into smaller and smaller numbers of people while the majority of us, the vast majority of working people in this country, are plunged into deeper and deeper misery. So we’re against all that, we’re saying let’s reorganize society, let’s have more equality, let’s use all of this tremendous wealth to fund the things that we need. Fund things like health care, housing, education, jobs. We believe all of these things should be fundamental Constitutional rights.”

“That whole question about whether Obama is a socialist is so ludicrous, name one socialist thing Obama’s done? Obama presided over the largest transfer of public funds into private hands in our nation’s history. He gave $700 billion of our money, of tax money to the big banks, to the big banks overnight. He gave it to them no strings attached. They have yet to account for what they did with the money. But that’s the opposite of socialism, that’s the opposite of what we’re talking about and what a socialist would do. We actually want to take that ill-gotten money, these massive profits that have been ripped out of people’s hands, forcing people out of their homes. We want to take that money from the banks and use that money to fund a jobs program, use that money to build housing, use that money to make sure that everyone can go to the doctor when they’re sick.”

One of the things that your party is concerned about is militarism. How does that play out at the national level as far as budgets and as far as priorities for the country?

“Yeah, I think that’s a really excellent point. I think we believe that the U.S. government is, in fact, the biggest threat to peace in the world right now. We’re calling for the immediate end of all the wars and we’re calling for bringing all of the troops home and closing down all of the bases. The war in Afghanistan costs close to $400 million a day. Think about what we could do with that money. I was an activist for Philadelphia public schools when I was a student in Philadelphia and this year they announced that the Philadelphia public schools have a budget shortfall of, I believe it was $278 million and so they’re being forced to privatize the school system is what they say. So one day of the war in Afghanistan, one day of that $400 million could fix the crisis in Philadelphia and then some. Imagine what we could do with this tremendous amount of money. The real spending for the Pentagon is something like $1 trillion and we’re saying ‘shut it down,’ let’s take that money and instead of using it to slaughter our sisters and brothers abroad, instead of using it to slaughter people in Afghanistan, people in Libya, people who just want to go to work, want to take care of their families, want the same things that we do, let’s use that money to invest in our communities, to invest in working people in the U.S.”

“That’s a great question. It’s extremely hard to get on the ballot. They say anybody can run for president until you actually try to do it and you realize how hard it is. It’s such an undemocratic set of laws and it varies from state to state. Which doesn’t make any sense for a federal office there should be one set of rules. Like for one federal office for people to qualify. We don’t know of any other country in the world that operates like the U.S., we’re like, for this one office they have completely different qualifications from state to state. In some states it’s extremely difficult and we know that’s intentional. They want to keep out opposing voices. They want to keep out anyone who’s not one of the big corporate candidates. Like, I believe Romney and Obama are spending $2.5 billion this year and those are both wealthy individually, you don’t get that kind of money without the big banks and the corporations, right? So, we believe that the elections are fundamentally a sham but we participate in them as a way of building the movement but when it comes to getting on the ballot we want to show people we’re serious, that we mean what we’re doing so we’re on the ballot in 13 states. And we’ve done it with no money. Not even millions, not even billions. We’ve done it with very little money but with a great organization of volunteers who really believe in what we’re doing. We turned in something like 30,000 signatures to get on the ballot in New York City. And it’s people who volunteered, not a single person was paid. We were just doing this because we believe in it and because we believe in a revolution, in a new system and getting our voice out through this election.”

In other “third-party” news, on Tuesday night the nonpartisan group Free and Equal sponsored a debate of presidential candidates moderated by talk show host Larry King. President Barack Obama and Mitt Romney were invited but did not attend – but four presidential candidates did. Rocky Anderson from the Justice Party, Virgil Goode from the Constitution Party, Jill Stein from the Green Party, and Gary Johnson from the Libertarian Party. Citizens could use instant runoff voting on the Free and Equal website to choose which candidates should move on to the final debate. 47,000 people voted. Thursday they announced that Green Jill Stein and Libertarian Gary Johnson would debate next Tuesday in Washington, D.C.

Update: because of Hurricane Sandy, the Free and Equal second debate between Stein and Johnson has been rescheduled for Monday November 5.

In other debate news, Ralph Nader announced that he would moderate yet another debate with those four presidential candidates on Sunday November 4 in Washington, D.C. at Busboys and Poets restaurant.

Click here to listen to my interview with Peace and Freedom Party’s presidential candidate Roseanne Barr.