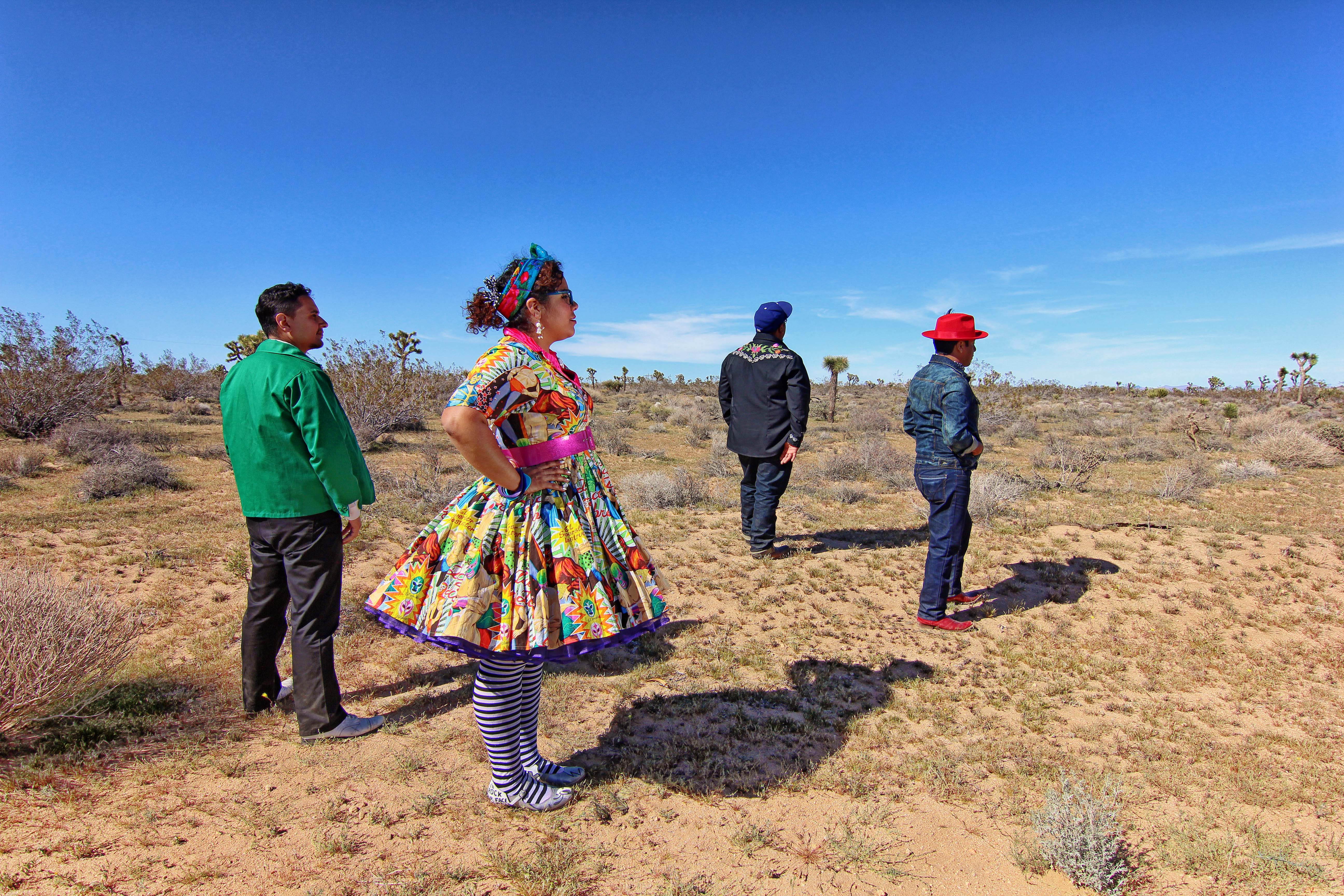 La Santa Cecilia’s  CD Buenaventura has been nominated for a 2017 Grammy award for best Latin Rock, Urban or Alternative Album.

La Santa Cecilia started their career by serenading passers-by on the embellished corners of downtown Los Angeles’ Olvera Street. They have become a musical phenomenon that has won a Grammy, toured from coast to coast, collaborated with Elvis Costello, appeared on Conan, and recently shared the stage with Led Zeppelin’s John Paul Jones.

With captivating voice that sings about love, loss, and disappointment, the band has become the voice of a new bicultural generation in the United States, fully immersed in modern music, but still close to their Latin American influences and Mexican heritage.

La Santa Cecilia was thrown onto the map in 2011 with the release of their debut album “Noches y Citas”. This album gave them their first nomination at the Latin Grammy Awards for the single “La Negra”. It was also with this release that they first voiced their sympathy and support for various human rights movements, and have since used their music to openly support these causes.

They followed that album with ‘El Valor’ in 2012, which was named one of the best albums of the year by NPR’s Alt Latino.

And then came their breakthrough—‘Treinta Días’. The album was recorded in 2013 and showed the band moving in a more sophisticated direction, while holding true to themselves. They combined cumbia, reggae, soul, tango, and their L.A. spice to create an album that went on to win the Grammy for ‘Best Latin Rock Album, Alternative or Urban’ in 2014.

The album featured a song called ‘ ICE (El Hielo)’, which was a militant anthem on humanizing the immigration tactics in the U.S.A. The song was controversial, and its accompanying video rang true to many who saw it. The song received accolades from major media outlets around the country, while the video was nominated for ‘Video Of The Year’ at Premios Lo Nuestro.

In 2014, La Santa Cecilia made their major label debut with ‘Someday New’ released on Universal. The first single, ‘La Cumbia Morada,’ combined infectious pop melodies with touches of cumbia. On March 27th of that same year, the band did something they never imagined— they performed at the legendary Vive Latino in front of thousands of screaming fans.

Summer 2014 was a busy season for the band. They presented their politically-infused video for ‘Strawberry Fields Forever’ at the LULAC (League of United Latin American Citizens) luncheon in New York, accompanied by none other than First Lady Michelle Obama. La Marisoul had the honor of singing the national anthem to the over 1,500 Latino leaders in attendance. Later that summer, the band played the sold out Reventón festival for over 20,000 people.

As if that wasn’t enough, La Santa Cecilia hit the big screen. They recorded the song “Tu Vida Es Un Escenario” , which was included in the award winning film”Cantinflas” and collaborated with Gustavo Santaolalla on “The Apology Song” for the animated hit film “The Book of Life,” directed by Mexican director Guillermo del Toro.

The band is also highly synced, with songs appearing in popular TV shows like ‘Weeds,’ ‘Entourage,’ and ‘The Bridge,’

Marisoul was also featured as a guest performer on Pepe Aguilar’s MTV Unplugged, which turned out to be the first Unplugged by a Ranchero artist.Pepe Aguilar later invited La Santa Cecilia on stage at the National Auditorium in Mexico.

In 2015, the band started dropping hints about a new album. During the summer, they released ‘I Won’t Cry For You,’ produced by multi Grammy award winning Sebastian Krys. The song plays with jazzy nuances, while juxtaposing it with traditional sounding accordion riffs and a tasteful pop melody.

“Calaverita” was released that fall. The song is a tribute to the great Latin American tradition of “Day of the Dead,” – in celebration and of those we’ve lost.

The band ended the year with a momentous appearance on Late Night with Conan O’ Brien, where they played the new single ‘I Won’t Cry For You.’

More recently in January of 2016, the band played Jeff Buck’s Todos Santos Festival in Baja California, only to be joined on stage by none other than Led Zeppelin’s own John Paul Jones on electric mandolin for a special rendition of “La Morena”.

‘Buenaventura’ the latest album from La Santa Cecilia,’ dropped in February and has received lots of WMNF airplay.

CuKiAra is an exciting new Tampa Bay contemporary/Folklore Puerto Rican bomba band who have performed at local high schools and festivals; and  teach workshops on folkloric dance & drumming, and have performed at the Gasparilla Music Festival as a pop up band last spring.   They are currently recording their debut album. 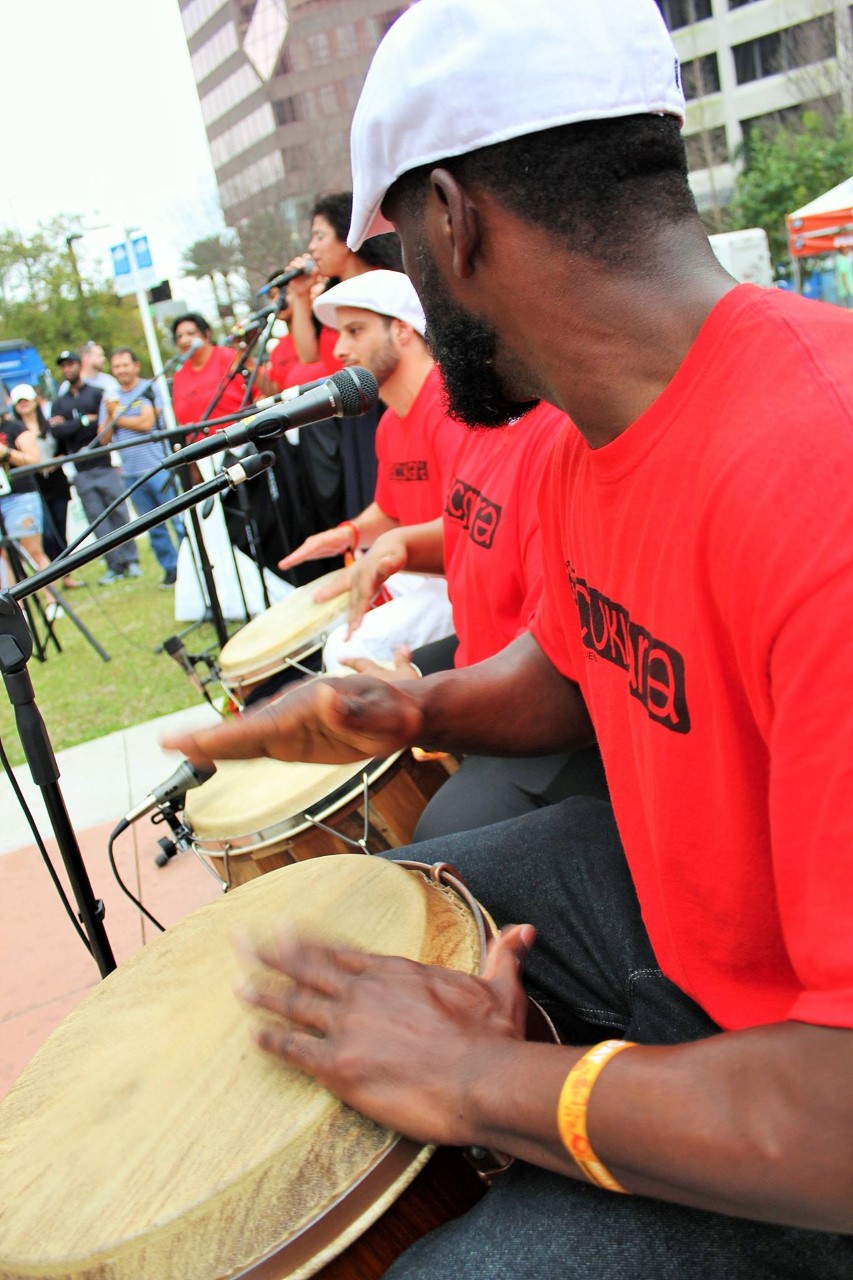