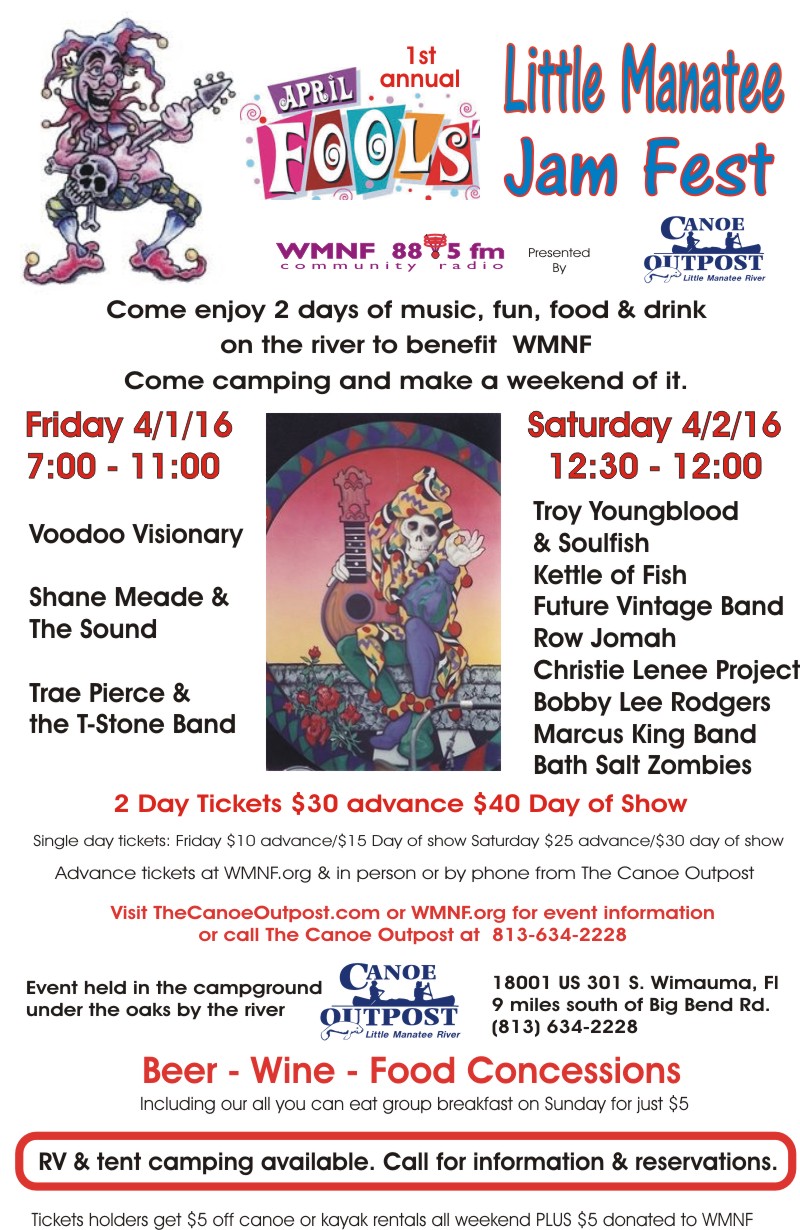 HERE ARE PLENTY OF TICKETS FOR PURCHASE AT THE GATE!!  See you there…

A beautiful venue, between trees and by a river.  A great event for families. Dogs are welcome on leashes. Camping is recommended – but day tripping is easy too. One hour from central Tampa, easy ride from Sarasota and Bradenton, right on Rte 301.. Call The Canoe Outpost for camping reservations 813-634-2228     Tickets will be on sale at WMNF until 2:30pm

8:20  – 9:20 pm   Shane Meade and The Sound  :  Shane Meade is a gifted singer songwriter and catalyst behind the soul-infused, rock jazz project Shane Meade & the Sound. His music captivates the imagination, and audiences connect to his inspirational lyrics and universal subject matter. His unique and soulful style helps deliver an engaging live performance that is both powerful and uplifting.

9:40  –  11:10pm    Trae Pierce and the T-Stone Band :  Trae Pierce (former Ohio Player and four-time Grammy winner) and T-Stone Band was the biggest surprise hit band of the 2015 Tropical Heatwave.  Their funky and fun music brings every audience moving and throwing hands in the air and smiling. Pierce funks you up with a band that is on fire! Sporting his signature top hat, Trae, along with his band, the T-Stone Crew, delight audiences with their special blend of blues infused with funk, highlighted by blistering bass riffs, talk box, slide bass and crowd interaction

11:30 – 12 noon  Pins n Needles  –  a Tampa based all girl band formed by friends, Ella, Hannah, Jaime, and Rachel.  They have been sharing their love of music since the summer of 2015.  These 4th-6th grade girls bring to you alternative pop covers in their own dramatic style.

12:30  – 1:40pm   Troy Youngblood and Soulfish  –  Troy Youngblood and The SoulFish is a six-piece band that plays unique soul blues. They used to be gypsies living in the Florida wilderness. But in 2015, they surfaced in the Tampa Bay area, bringing their brand of blues and soul with them. They recently placed third in the Suncoast Blues Challenge.   They received lots of positive attention when they recently played live three times in five days  on WMNF  (the perfect trifecta: Live Music Showcase;  Musicians Wanted and In the Groove).  They have played festivals like the Orange Blossom Jamboree, Peace Love and Blueberries, Myakka River Jam, Zen Fest, Aurora Sol Fest, and Luna Walkabout Fest.   We are excited that this will be their first WMNF event.

3:20  – 4:20pm   Future Vintage Band –   Future Vintage  bridges the gap between all great Funk music past, present and future. The music is rooted in the classic Funk of the 70’s and early 80’s with further influence from the Hip Hop and Neo-Soul of the 90’s and 2000’s and finally with an ear to what’s happening in Electronic Dance Music today.

6:00 – 7:00pm   Christie Lenee Project :    Raised in Tampa, Christie Lenée has been expanding her fan base across the US, touring frequently and delivering vibrant energy at every show. Her unique guitar work is often compared to Michael Hedges meets Joni Mitchell and Dave Matthews, delivering profound instrumental compositions with heartfelt, consciously uplifting songs.  Her guitar work includes an abundance of innovative techniques and a percussive approaches.

7:20  – 8:30    Bobby Lee Rodgers   –  Whether rocking out to his own compositions in the jazz or jamband scenes or presenting his unique interpretations of musical greats such as Miles Davis, John Coltrane or Wes Montgomery, guitarist Bobby Lee Rodgers is staking out a legendary path with fans and critics alike.    Bobby brings a unique sound to his performance because he plays through a combination of Leslie cabinet and vintage guitar amp which gives him the beautiful sound of an organ and guitar together. A stellar songwriter, vocalist and guitarist he fuses rock, funk, jazz and blues into a magical musical tapestry.

8:50   – 10pm     Marcus King Band –   Young songwriter Marcus King’s debut album, Soul Insight, out now via Warren Haynes’ Evil Teen Records, displays his stunning command of rock, blues, psychedelia, funk, soul and improvisation — all with a distinctly Southern musical accent. It also brings the 19-year-old a step closer to his musical destiny. He has been called the next Duane Allman or Derek Trucks, but he stands on his as a wicked axe wielder who also has a powerful songwriting voice, playing soul, blues, southern rock and a great jam. King and his group have opened for such acts as the Foo Fighters, Johnny Winter and Gov’t Mule, where Warren Haynes came to recognize the talent of King and issued his debut album.

10: 20 –  11:30pm   Bath Salt Zombies :    The Bath Salt Zombies performances are an entertaining mix of originals and covers that has been variously described as grunge grass, carnival freak folk and sideshow cabaret.  Along with their unique sound, an unusual style of dress (mid 1800s Victorian) represented by their top hat logo, and engaging repartee with their audiences are  signatures of The Bath Salt Zombies.   They specialize in creative outrageous Festival campsite light shows;  they will given closing festival rights for our April Fools Jamfest to experience their light show.