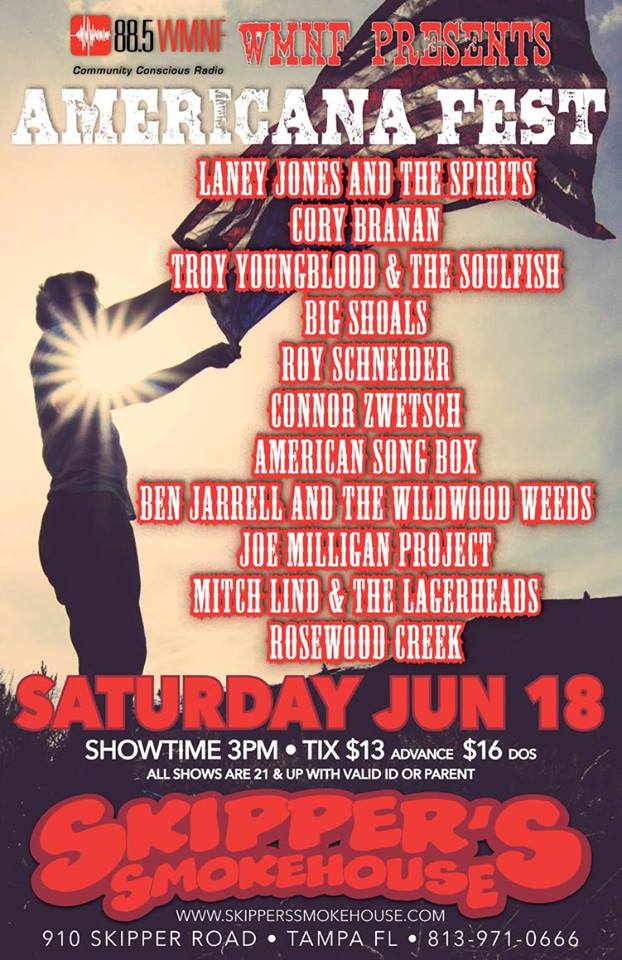 Laney Jones and The Spirits – One of the fast rising Americana bands in the country, from a start in central Florida to national attention.  Raised on an exotic animal farm in Mount Dora, Laney Jones is a singer-songwriter whose live performance highlights her multi-instrumental prowess on banjo, ukulele, tenor guitar and harmonica backed by her band, the Spirits.    This past January, Jones was featured on the PBS series, Great Performances, a  documentary offering an overview of the Kennedy Center’s American Voices  festival and featuring Laney as an emerging artist alongside musical great Alison Krauss.   A graduate of Berklee College of Music, she has played stages at Grey Fox, Shakori Hills, Lancaster Roots and Blues and received invites from SXSW and a formal IBMA showcase.

Cory Branan –   Mississippi-born Cory Branan called his latest album, “The No-Hit Wonder”, in characteristic self-deprecation. His music floats effortlessly from punk to blues to country to classic rock and everything in between.  A Cory Branan live show is an experience. The man who says he’s never played a song the same way twice gravitates towards the dramatic on stage. He punishes guitar strings, stops and starts mid-song, stomps the stage, teeters between melody and strained growls. Plus, he’s a storyteller, both in his songs and between them.  He never ceases to entertain, a showman through and through.

Big Shoals  –  The only band from our 2015 Americana Fest to get invited to return this year.  The Gainesville group has staked their claim as a serious band with a range that goes from all out rock and roll to a beautiful whisper. With thought provoking lyrics and songs written by Lance Howell, they’ve been expanding their touring range throughout the South and Midwest.  After playing the 2015 Americana Fest they were terrific opening the packed WMNF show at Skippers with James McMurtry in November, and they are playing the 2016 Tropical Heatwave.  You might say we can’t get enough of Big Shoals.

Roy Schneider  (accompanied by Kim Mayfield) –  Roy Schneider is an award-winning songwriter and multi-instrumentalist who has performed all over the United States, Great Britain and parts of Europe.  His rootsy songs contain a mix of blues, country, folk and Americana all rolled into a beguiling and tasty stew.  Schneider has thrice been a finalist in the Kerrville Folk Festival’s prestigious New Folk competition and has released  five  albums.

Troy Youngblood and The SoulFish   –  a six, sometimes seven-piece band, that plays a unique kind of soul blues. They used to be gypsies living in the Florida wilderness. But in 2015, they surfaced in the Tampa Bay area, bringing their brand of blues and soul with them. They recently placed third in the Suncoast Blues Challenge.  On their resume are festivals such as: the Orange Blossom Jamboree, Peace Love and Blueberries, Myakka River Jam, Zen Fest, Aurora Sol Fest, and Luna Walkabout Fest.

Connor Zwetsch –   Plant high school grad  Connor Zwetsch ’s unique niche as a solo artist is defined by a sound laced with nostalgia and shaped by a back-porch songwriter’s honesty with a penchant for catchy, upbeat melodies.   She emanates a contagious kind of comfort on stage, letting audiences sit back and sink into her warm, sultry vibes.   Her debut EP, “ What Comes After”, recorded at Bear Creek Studio with producer Ryan Hadlock (The Lumineers, Vance Joy), was released in August, 2015.   She is currently on a tour out west and coming back to play Americana fest with her band.

American Song Box  –  a Tampa-based acoustic rock ensemble performing original songs and music. Todd Murphy is from Scranton, PA, but has lived in Florida since 1997. He and RJ Kerker met in Tampa performing at open mics before uniting their talents together. Along with Chris Evans, the three have created a unique and creative ensemble known now as American Song Box. With friends and family joining in on stage at their live shows, it’s always a great mix of music, talent and personalities.

The Wildwood Weeds –    The band stays true to their foundation in remaining an acoustic act for the most part, although they’ve been known to share the stage with electric and acoustic players alike. All in all, its just good old storytelling roots music with a kick!

Joe Milligan Project  –   a diverse cast of musicians whose music  presents an eclectic style, ranging in style from stripped down acoustic folk and country to full band rock and roll energy.   Their recent CD, Anticipation, captures this eclectic sound, and is covered with the fingerprints of Chris Harmon, a founding member of The Joe Milligan Project, who died last summer.  Without Chris, there would have been no Joe Milligan Project.

Mitch Lind & The Lagerheads   –  formed by Mitch Lind, founder of the Riverhawk and Stringbreak Festivals,  this gang pulls to the left of the bluegrass center. With a bunch of home grown tunes and a splash of traditional, it’s a mixture of fun, real life stories and great instrumentals. Band members Alan Waters (banjo) & Ronnie “Mac” McGalliard (bass) have been performing with Mitch for over 20 years. Put Jason “Cornbread” Baker on the fiddle and Clint “Doc” Dockery on the mandolin and it’s a hoot to behold. Keep a safe distance from the band, though – they’ll steal your food.

Rosewood Creek –   a  St. Petersburg based  Americana and roots-rock band. with a show that is high energy and appeals to all kinds of people. Much of the band’s material is original, written by one of the three songwriters in the band. Cover songs are sprinkled through the sets but they are carefully chosen, presented in the band’s unique style, and are not songs that have been overdone. Four of the five members sing, and three part harmonies are often heard. In addition to the bass and drums of the rhythm section, you will hear acoustic and electric guitars, 12-string and lapsteel guitars, mandolin, fiddle, percussion and maybe even a banjo or ukulele.

You can get tickets here.