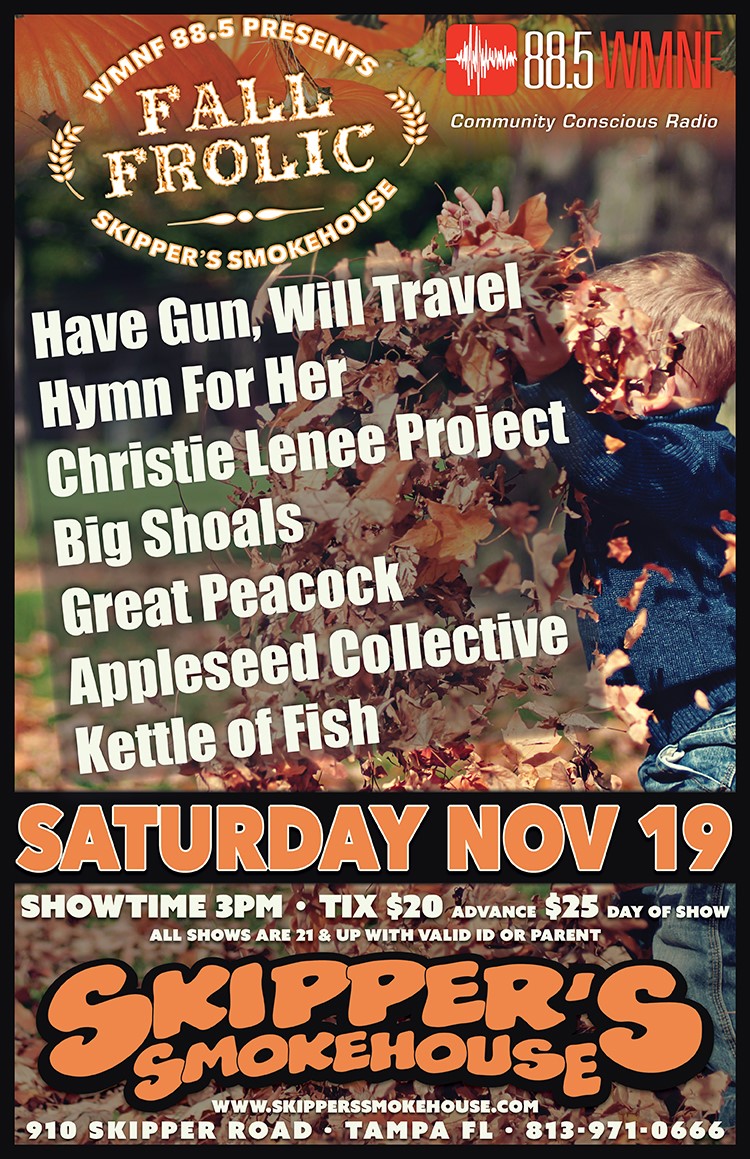 To celebrate the beautiful Florida fall weather, WMNF will present a day of eclectic music and fun under the oaks at Skippers Smokehouse.   Tickets are $20 in advance, at outlets and at the door.   Doors open at 2pm… The lineup and times:

11pm – midnight  SUSTO   –  SUSTO is a southern-folk/indie-americana band who write ballads delivered with a whiskey-soaked growl filtered through gritty, swirling production. Band leader and wordsmith Justin Osborne’s conversational lyrical style was initially inspired by the straight-forward speech of locals in his hometown in rural South Carolina. Osborne continued to take cues from locals, finding himself transfixed by the “fearless storytelling” of Trova Musicians while living in Havana, Cuba. The result is a music of brooding tunes rife with dark textures and acute self-discovery.

9:40 -10:40pm    Hymn For Her  –  Spending the summer touring Europe and the fall out west  in their Bambi Airstream, Hymn For Her plays backwoods country blues injected with a dose of desert rock psychedelia that has been described as “Hell’s Angels meets the Amish.   Their “ripsaw sounds” (Los Angeles Times’ Randy Lewis) are created by two people. Wayne (with the devilish voice), playing the kick-drum, high-hat, acoustic guitar and harp, serves as the group’s rhythmic driving force. Lucy (of the fallen-angel voice) delivers a gritty squall on her “Lowebow” — a custom-made cigar-box guitar: “The Riff Monster.

8:20 – 9:20pm     Have Gun, Will Travel   –  For eight years HGWT has been among the most played bands on WMNF.   They have played memorable sets at many WMNF festivals, including Tropical Heatwave, WMNF Birthday Bash and Little Manatee Jam.  We are happy they can headline this new WMNF fall event.  HGWT has five terrific albums of Americana, folk-rock. and indie-rock, with songwriter/lead vocalist Matt Burke writing lyrics drawing on themes of history to give the songs unique color.

7:00 – 8:00pm    Christie Lenee Band   –  Raised in Tampa, Christie is now based in Nashville and is gaining  new fans across the nation discovering her amazing instrumental talents , warm personality, and  vibrant energy in live shows,    Fusing folky/funky playfulness with pop/rock inspired songs and virtuosic guitar compositions, she is, as Skope Magazine states, “a refreshing burst of unrestrained love and feeling… It’s simply a joy to listen to her spirit break free.” Her innovative guitar work is often compared to Michael Hedges meets Joni Mitchell; she delivers profound instrumental compositions with heartfelt, consciously uplifting songs.   She recently had a CD Release Show at the Straz Center backed by the stellar ensemble which will be at The Fall Frolic.

5:40-6:40     Big Shoals  –   A Gainesville band that should be recognized as one of the best roots rock bands in the country.  Lance Howell is an outstanding songwriter, guitarist and vocalist and leads a strong band.   “Big Shoals should be in equal plane with the Isbells and Stapletons….. Emotional evacuations and real feeling fuel Howell’s songs.”    –  No Depression

4:20-5:20pm      Appleseed Collective  –   The Ann Arbor ensemble (who are Tropical Heatwave alumnae)  play  swing, folk and gypsy jazz with original songs, lighthearted lyrics and infectious musicianship. With violin, guitar, bass and washboard,  they are riding the wave of the bluegrass revival beyond newgrass and into a strange new genre-bending territory.   They explore the full range of dark and light, old and new, composition and improvisation in a deeply theatrical stage show that transports audiences through time.

3pm-4pm       Kettle of Fish  –    Their original music is an amalgam of rock, blues, reggae and New Orleans soul.  Dana Lawrence is a first class songwriter and their covers include deep tracks from Little Feat, the Rolling Stones, the Neville Brothers, the Allmans, the Dead,  Otis Redding, Jimi Hendrix and much more… Throw in some Freddie King, Howlin Wolf, Cream, Muddy Waters and Robert Cray blues and it’s a Kettle of Fish.