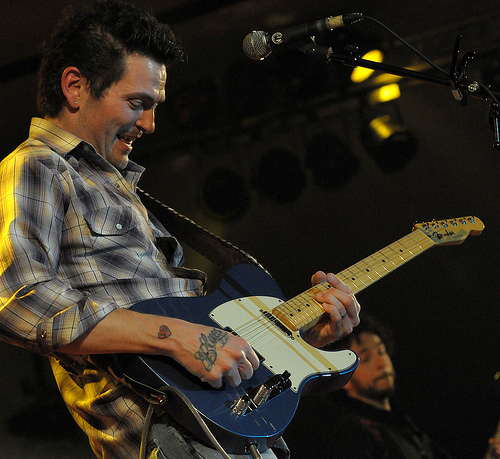 This great blues double bill is a co-promotion of WMNF Community Radio and the Suncoast Blues Society, celebrating their 20th anniversary. App users, you can purchase tickets here.

The natural habitat of the true musician is not the gleaming studio, a glitzy showbiz party or a five-star hotel. It’s the road. And if multiple Blues Music Award winner Mike Zito had a dollar for every mile of tarmac he’s burnt since his breakout in the early-’90s, they’d be piled up to his chin. “There’s just something in me,” considers the solo bandleader and Royal Southern Brotherhood co-founder (with Devon Allman and Cyril Neville), “It’s there in all musicians. You gotta love the road to be a part of this world. You’re right there, looking in people’s eyes, swapping stories, shaking hands…”
There’s an undeniable romance about a life in motion – and an enduring magic about the moment when the house lights go down, the roar of the crowd goes up and the shadows take the stage. For Mike, who began touring the Midwest circuit at the age of eighteen, and has since crossed twenty-plus countries as guitarist with the Brotherhood, this is when things get serious. “In my band, The Wheel, if you’re not already with us, you’d better get on board,” he grins. “Because otherwise we’re gonna knock you down!”

In Mike’s own words, the bandleader “grew up poor in St. Louis”; in a blue-collar family whose father logged 40-hour weeks at the local brewery. Ten years working at a downtown guitar shop, under the tutelage of an older employee, exposed him to titans like B.B. King, the Allmans and Eric Clapton (and from there, Joe Pass, Robert Johnson and Blind Willie Johnson), and though he was fired from early cover bands for refusing to mimic the solos, by 1997, he had released his debut album Blue Room. “The first time you hear yourself,” recalls Mike, “you think, ‘Wow, that almost sounds like music!’”

There were bumps in the road, of course. By the post-millennium, creeping alcoholism and drug abuse had threatened to rob Mike of his talent and livelihood. For a time, all seemed lost. But since the epiphany of meeting his beloved wife (“I give her all the credit in the world”), Mike has blossomed as both a man and musician, and in 2014, he can reflect on a run of thrilling solo albums, plus two universally renowned studio releases with the Brotherhood. “It’s all working out,” he beams, “and I couldn’t be more thankful.”  “Gone To Texas is an old slang expression for the man of the house has split,” Zito says with a smirk, “My life now couldn’t be further from that.”

Chris O’Leary cut his teeth on six years as singer, harp player and front man for Levon Helm’s Barnburners and seven years in the U.S. Marine Corps (infantry squad leader in the Gulf War) ­— you’ve got to be pretty tough and competent to handle either of those assignments, and Chris came through with flying colors. International tours with the Barnburners and an extended musical residency in New Orleans’ French Quarter bring a wealth of influences to his singing, playing and songwriting. The Chris O’Leary Band’s 2010 VizzTone debut, MR. USED TO BE, garnered critical raves, international airplay, a prestigious Blues Music Award nomination, and a “Best New Artist Debut CD” victory at Chicago’s Blues Blast Music Awards.