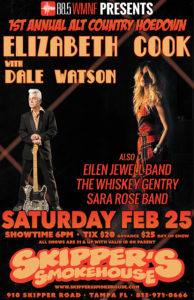 Advanced sales have ended at WMNF, on-line & by phone (as of 5pm Friday, 2/24) … You can try an outlet or there will be about # 50 – 75 tickets to sell at the door (depending on outlet activity).  If you need to purchase, the door (and will-call table) open at 5pm.  This show will sell out very soon after that, we suspect.

Elizabeth Cook  –  The youngest of 11, Cook was born in Wildwood, Florida and her parents were musicians who played string instruments.  Her father honed his skills playing upright bass in the prison band while serving time for running moonshine.  After her father was released, he and his wife began playing in local country bands together. Elizabeth was on stage with them at age four, singing such inappropriate songs as ‘I’m Having Daydreams About Night Things’   At the age of nine, she had her own band. She started recording her own music in 2002 and has achieved a reputation as a deeply independent artist exploring the dark edges of country music.  Cook hosts the radio show “Elizabeth Cook’s Apron Strings” on the Sirius XM station Outlaw Country.

“As if she’s emerged from a dark night of the soul and felt the need to push against the limits of her expression.” – NPR.

Dale Watson – the tattoed, stubbornly independent outsider who insists on making authentic country music.   Dubbed “the silver pompadoured, baritone beltin’, Lone Star beer drinkin’, honky-tonk hell raiser” by The Austin Chronicle, Watson is a veteran touring artist and consummate entertainer who is on the road more than 300 days a year.  An outspoken proponent of classic honky-tonk for over two decades, Watson has christened his brand of American roots music “Ameripolitan” to differentiate it from the current crop of Nashville-based pop country. In 2014, he founded the Ameripolitan Awards in Austin each February to recognize the best in Honky-tonk, Outlaw Country, Rockabilly and Texas Swing music.

Eilen Jewell Band  – the long time WMNF favorite whose music is perfectly situated at the crossroads between folk, country and rock.   “Tantalizing… Wonderful voice… this slightly restrained, beautifully crafted and enticing Eilen Jewell disc proves she remains one of American’s most intriguing, creative and idiosyncratic voices.” – American Songwriter, Hal Horowitz   “She’s got a sweet and clear voice with a killer instinct lurking beneath the shiny surface.” –  NPR Song of the Day

The Whiskey Gentry is a toe-tapping, steamrolling kind of band, its fingers picking deep into fields of bluegrass, feet stomping in line with a punk-inspired kick drum. On its self-titled debut EP, the band effortlessly marry old country and new grit, and carrying you along into the Appalachians with the pull of a landslide. “We aren’t reinventing the wheel,” says guitarist Jason Morrow. “We’re just painting it.”