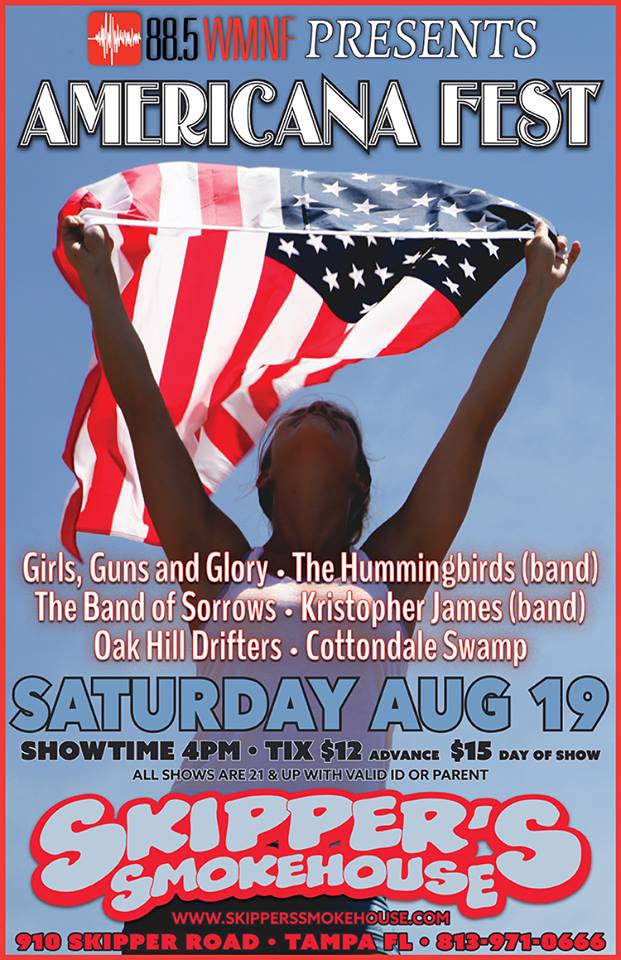 Advanced ticket sales for this event have ended at WMNF (by phone & on-line), at 12pm today.  The will-call table &  door open at 4pm & admission is $15 or you can check with an outlet for the advanced $12 tickets.  The schedule, currently (subject to change):

Girls, Guns and Glory  – Singer, guitarist and songwriter Ward Hayden got together with several like-minded musicians almost a decade ago. Their love for early rock ’n’ roll, true country, raw blues and pretty much any kind of authentic American music branded them quickly as anomalous — and electrifying. Since that time they’ve barnstormed far beyond their Boston hometown, playing honky-tonks, beer joints and more recently concert venues throughout the U.S. They’ve amassed a loyal legion of fans along the way. The media have noticed too, including Rolling Stone, which heralds them as a “modern-day Buddy Holly plus Dwight Yoakam divided by the Mavericks.”

The Hummingbirds (band) –     The Hummingbirds are husband-wife team S.G. and Rachel Wood and they have become favorite WMNF artists in the past few years. Their music is both northern and southern Americana, blending both grit, and self reliance with hospitality, and charm. They play old guitars through old amps, bang drums, and even pluck banjos sometimes. Their live stage chemistry and organic  harmonies immediately captivate and charm audience members while Rachel’s solid command of rhythm guitar, peppered with S.G.’s thoughtful lead work, keep their songs rolling in true Americana form.  Their set at Americana Fest showcases S.G> and Rachel with their topflight backing band.

Oak Hill Drifters  – Oak Hill Drifters span the rockabilly, country and early R&B genres with ease, with nods to Janis Martin, Bob Wills, The Everly Brothers, Little Willie John and Charlie Feathers alike. The high energy provided by Craig Roy’s upright bass, George Dimitrov’s guitar licks, Tom Cooper’s guitar and steel guitar, and the kickin’ drums by Tom Pearce will keep your feet moving and your head nodding, and the dual vocals and harmonies from Tom Cooper and Rachel Decker will keep you wanting more.   They were a big hit at the 2017 WMNF Rockabilly Ruckus.

Will Erickson  –     A second generation singer cut in the mold of his father’s southern rock roots of Central Florida and raised in the hardworking small town of Lancaster, SC, Will has as style of rootsy Americana all to his own, with songs that tell stories of poor life decisions, alcoholic nights, love lost, and redemption.   He has had a few albums;  his 2016 release “The Five Year Weight” caught our ear at WMNF.

Mercy McCoy  –  a  rootsy Americana band that blends folk-rock, pop, and blues. Their sound  has been compared to Dawes, Jason Isbell, and the Counting Crows,  with songwriting  intended to sound good in your ears and feel good in your heart.

Flow Sisters  –  Fronted by sisters Alexa and Bella Toro,  the band features a collection of eclectic musicians who have come together to create a melting pot of folk, funk, soul and psychedelic.  With vocal harmonies that enlighten your mind and positive lyrics that heal your soul you wont want to miss the  Flow Sisters set!