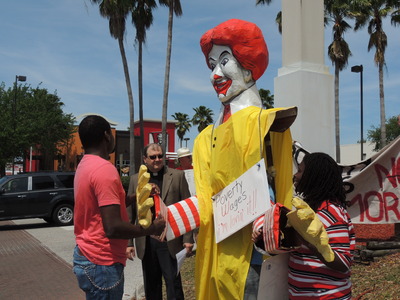 A union in St. Pete is trying to get the city to pay its workers at least $15 an hour. That would affect more than 300 city employees – some of whom make only about $9. Brian Brehm is a mechanic at one of the city’s sewage treatment plants.

“What about these poor guys who are out working in the sun all day long keeping our city beautiful and they’re living below the poverty level making $9.50 an hour, maybe a little bit more, really isn’t anything to live on.”

Brehm already makes more than the proposed minimum wage, but he’s advocating alongside the Florida Public Services Union for the increase. St. Pete Mayor Rick Kriseman wouldn’t comment on the ongoing negotiations, but Brehm has met with him.

“He seems like a reasonable guy who really wants to do the best he can for the citizens of St. Petersburg. So, I don’t doubt that we’ll see some real movement.”

The challenge is, negotiations just started. The mayor has until July 1st to submit a budget to city council. The wage increase would cost the city about a million dollars – a big chunk of change to squeeze in at the last minute. But the mayor has said he is setting aside 2% of the general operating budget into a contingency fund for pay raises. Aaron Dietrich is with the Florida Public Services Union.

“That equates to roughly $4 million. Our proposal to raise the base rate in the city to $15 an hour will cost approximately $1 million. So, we’re very confident that the money is there to make this decision. I think it’s really more a question of whether the political will is there.”

Dietrich says the negotiations could take several months. The next meeting is next week. Union reps are keeping low wage city employees in the loop. Ethan Butler makes a little over $12. His city job washing garbage trucks is now his family’s only source of income since his wife stopped working as a nurse because of an illness.

“With her income not in the house it’s just a little more strained and a little bit more difficult for me. I make it through, but it’s tough.”

Minimum wage has become a national debate with groups across the nation embarking on what they’re calling the Fight for Fifteen. The movement has led to worker strikes at fast food restaurants and retail stores. Jack Temple is a policy analyst with the National Employment Law Project.

“Until Congress raises the federal minimum wage to a more substantial level, we’ll only continue to see more cities and states take action to boost pay for low wage workers.”

Maryland is steadily increasing its minimum wage with the goal of having it at $10.10 by 2018. Cities like San Fransisco, Seattle and Chicago have all passed $15 minimum wages. But there is pushback from conservatives that higher minimum wages are bad for the economy. Temple says that’s not true.

Corporate giants like Starbucks, Chipotle Mexican Grill and the Gap have said they support at least some wage increases. Temple argues raising the minimum wage is actually good for business. It boosts worker retention and morale. And not doing it, he says, is costing taxpayers billions.

“Large companies like Wal-Mart, like McDonald’s, have essentially said, we’re going to pay the very minimum that we can even if it means that workers can’t afford to buy food or housing and those workers therefore have to rely on public assistance in order to make ends meet. So, in other words, low wage jobs and keeping the minimum wage at a rock bottom level not only creates hardship for low wage workers, but creates a potential cost for the public as a whole.”

According to the Massachusetts Institute of Technology’s wage calculator, a St. Pete resident who is single with one child would need to make about $20 an hour to earn a livable wage. That calculator takes into account things like housing, food, healthcare and babysitting. And Temple says raising the minimum wage benefits more than just employees at the very bottom.

“Workers who make just above the new minimum wage rate also receive a pay raise as well. What it does is help support wage growth across the lower end of the economy.”

Many of the employees who would benefit from the $15 minimum wage negotiations work in departments like Parks and Rec, sanitation and even in some libraries. Those include both white and blue-collar jobs.