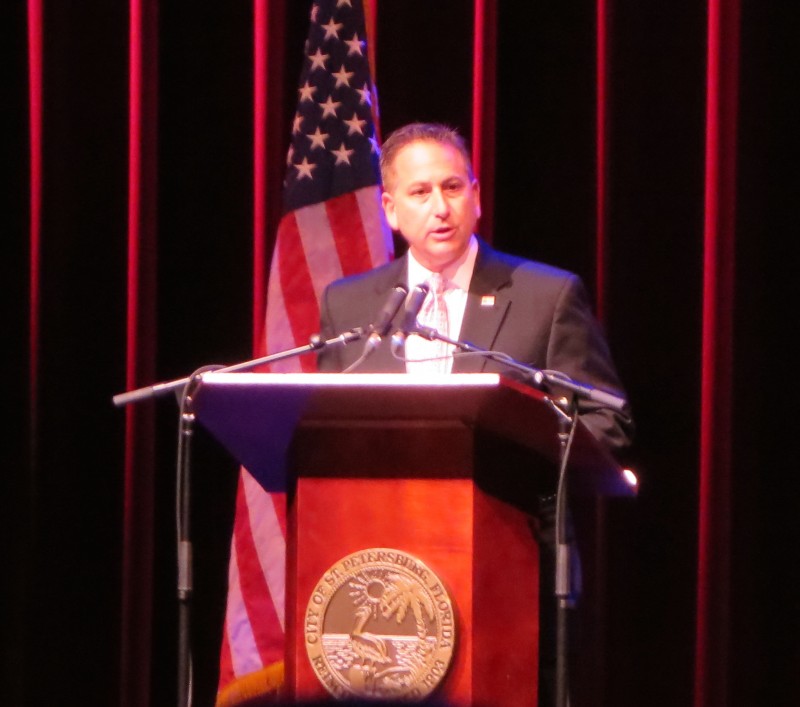 Mayor Rick Kriseman announces that the state of Saint Petersburg is strong and sunny. Kriseman delivered his State of the City address last Saturday at the Coliseum. The auditorium was packed with city workers, residents and elected officials. The mayor outlined progress already made then laid out his short and long term agenda’s.

Mayor Kriseman began with his hard stance on gun violence; worked through firefighter and police high school training programs; then on to economic development and job creation throughout the city. He is proud of his dealings with the Rays and the progress made on the Pier. He even wants Saint Petersburg to compete for a possible Cuban Consulate.

One resident, Mike Manning, thinks the mayor is on the right track. “I think he’s got everything perfectly straight for this city. I think it’s moving in a wonderful direction I think he’s done what we needed to do with the Rays. I think he’s got the Pier taking care of. And I think his focus on the South side of the city is the best place we can look at for growth and trying to create opportunity for that part of the community.”

Improving the quality of education in Saint Petersburg was included in Kriseman’s address. The city is home to some of the worst performing schools in the state. These schools are sometimes referred to as failure factories. Kriseman wants to elevate those schools.

City Council member Lisa Wheeler-Brown said the mayor can’t do that alone. “One thing he said, that I agree with, is that it’s going to take the entire community. Because my granddaughter goes to Melrose (Elementary School-one of the worst performing schools in the State) and I am always in that school. She’s an honor roll student. She’s just in the 1st grade. But I have three grandkids that go there. We do need to bridge that gap with Pinellas County and Saint Pete to make sure that our kids are getting a quality education. Because everybody deserves to get a quality education.”