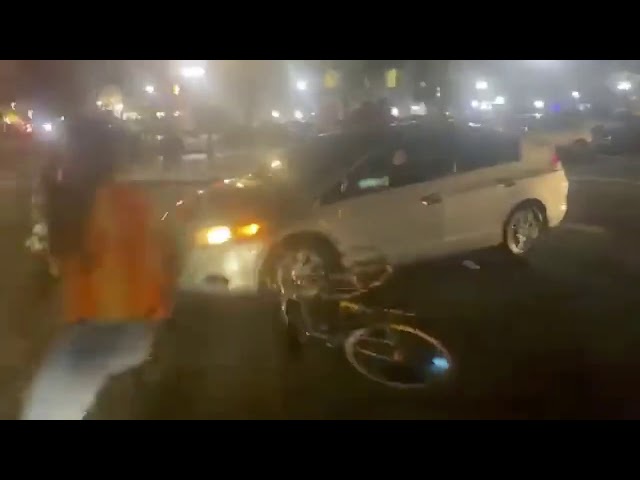 Last Thursday, Black Lives Matter activists with the St. Pete Peace Protest captured video as a Pizza Hut delivery driver drove through demonstrators standing in a crosswalk. Activists are calling for the driver and a local manager to be fired, but the company isn’t saying much.

And as happens almost every night, threats came from drivers who passed marchers.

Ever since the murders of George Floyd and Breonna Taylor sparked new calls for police reform and an end to systemic racism across the country, members of the St. Pete Peace Protest have been making their way through the city’s downtown core to call for an end to police brutality and more accountability, among other demands.

“We want body cameras and demilitarization of police,” Carroll said.

As demonstrations persist and tensions rise, counter-protestors and far-right extremists have become emboldened by what many see as support from law enforcement and even the White House, leading to more death and violence. In some cases, including here in Tampa Bay, counter-protesters have begun using vehicles as weapons.

Which is why last Thursday, the St. Pete Peace Protest had a night like no other.

“Before you know it, I look back and he’s trying to plow through our guy on a bike,” Carroll said.

Activists were ending their night, marching back toward City Hall and heading west across Central Avenue. As is customary for their marches, a few people stood in the crosswalk at 3rd Avenue North as the marchers crossed on a “Walk” signal to make sure everyone could get through safely.

A St. Pete Peace Protest marcher who goes only by Sara.

“Most of the time we can get through the intersection within the light cycle,” she said. “If not, it’s usually just a matter of seconds before we get through. you know, it’s not a huge inconvenience for these people to really consider running people over with their vehicles.”

When the light turned green for northbound traffic, the driver of a silver Honda Insight with Florida License plate BCET50 and a Pizza Hut medallion on the roof decided he didn’t want to wait for them to cross.

In video now making the rounds on social media the driver is seen going straight through a crowd of activists standing in the crosswalk, running over a bicycle as two people narrowly jump out of the way and the driver nearly hits another car.

Activists, including Bryan Edwards, immediately tried to contact the Pizza Hut at 2421 4th Street N to let management know what the employee had done.

“We told them what happened. We said, hey, we saw there was a pizza delivery driver who pushed through a protest line downtown” Edwards said. “He said, ‘yeah that was me and I didn’t hit anybody.’ We said well, we have video. He said, ‘go ahead and call the cops then.’ and he hung up.”

But no one did. And until someone does, St. Petersburg Police spokesperson Sandra Bentil said there’s nothing police can do. A video with no complaint, is simply not enough.

“We can’t launch this type of investigation just because a video exists,” Bentil said. “We actually need to talk to people and get an idea of what happened and take it from there.”

#stpetepd does not condone anyone driving into a crowd of protesters or promoting violence against protesters. Anyone who intentionally drives into a protester will be charged according.

But in recent months, activists have grown disillusioned with police. At best, they say complaints about threats from drivers and harassment during marches are ignored. At worst, they feel police have taken the side of counter-protesters supporting Blue Lives Matter as others plea for the protection of Black lives.

Bentil said that’s not the case.

“It doesn’t matter where you lie on what issue,” she said. “What matters is that we keep the public as safe as possible.”

And if there’s a grievance, Bentil said that can be taken up with the department’s professional standards department, which exists to make sure police are upholding the law for everyone, not just the people they like.

Meanwhile, management at the Pizza Hut location refuses to comment on the incident. District manager Sue Giberson said there was an investigation, but that the results wouldn’t be made public. She deferred questions to NPC, a restaurant group that operates Wendy’s and Pizza Hut franchises.

Activists and customers who’ve attempted to call Giberson have said she’s become hostile and dismissive. Parent company NPC has not responded to multiple emails and phone calls. And Pizza Hut’s social media accounts have only stated the incident has been shared with their team. Now activists are calling for the immediate dismissal of Giberson and the driver.

Regardless of the outcome, members of the St. Pete Peace Protest, like Miracle Carroll, a Queer Black activist, are not discouraged.

“Then again, it’s also kind of scary living with all the hatred in the world and, you know, just kind of living with it,” they said. “It’s scary, but, you know, you’ve got to power on.”